Is This the End ForEgypt's Muslim Brotherhood?

There are three options for the Muslim Brotherhood to reverse its fortunes. 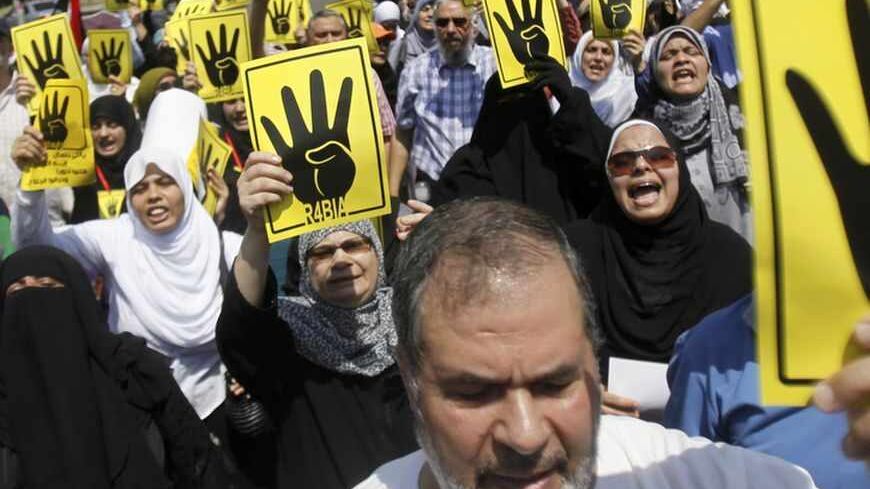 Members of the Muslim Brotherhood and supporters of ousted Egyptian President Mohammed Morsi shout slogans against the military and the interior ministry as they make the "Rabaa" or "four" gesture, in reference to the police clearing of Rabaa al-Adawiya protest camp on Aug. 14, during a protest march towards El-Thadiya presidential palace in Cairo, Aug. 30, 2013. - REUTERS/Amr Abdallah Dalsh

About six weeks ago, fresh after President Mohammed Morsi’s ouster and at the height of the pro-Morsi sit-ins at the Rab’ia al-Adawiyya mosque and Ennahda square, I wrote debating where the Brotherhood stood then, what it appeared to be facing, what strategy it seemed to be employing and what were the options at its disposal. Since then, the situation has, well, incredibly and dramatically changed.

The administration in Cairo has since decided to take a confrontational approach toward the Brotherhood. The two sit-ins have been broken up by the police in a tumultuous day, and the confrontation that day and after has left a death toll in the hundreds and a much larger number of injuries among the pro-Morsi ranks. Morsi remains detained and has reportedly just been referred to the criminal court over charges of incitement of violence. Almost the entire top leadership of the Brotherhood has been apprehended (including the Supreme Guide Mohammed Badie and his deputy Khairat el-Shater) and is being investigated over charges such as the incitement of violence. Many within the second-tier leadership have been apprehended as well, while a sizeable number of supporters were arrested with official reasoning being allegations of connection to violence. The heated, volatile response by the more radical elements on the pro-Morsi side following the dispersal of the sit-ins — which involved more open use of violence as well as the attacks on churches and other reports of sectarian attacks — have made the public perception of the entire camp even more unfavorable and have weakened some nascent sympathies, especially within a hostile media environment.

The predominant tone in the media remains increasingly confrontational, the pro-Morsi side continues to be presented as “terrorists” and figures speaking of any form of political reconciliation are increasingly being cast as unpatriotic or even “Brotherhood sleeper agents.” The prime minister’s recent, somewhat reconciliatory statements and the deputy prime minister’s somewhat dovish initiative were both met with considerable backlash. The leading Salafist party, Al-Nour, has further distanced itself from the Brotherhood, and is partaking in the political road map set by the military and has joined the 50-strong constitutional amendments committee. The only Brotherhood-friendly outlet, Al Jazeera, is seeing its Egypt-specific channel become the subject of a popularly backed suspension campaign and is being taken off the air. The Brotherhood’s non-Islamist, former January revolution allies are now either in support of the crackdown, or a minority standing against both the Brotherhood and the administration in Cairo, or others perhaps willing to go as far as being critical of the current situation in one way or another but would seemingly never align with the Brotherhood ever again.

The public largely appears to be moving on, and if recent local polls are to be believed, a majority seems to be on the side of the administration. A recent Baseera poll for example put 67% in support of the dispersal of the sit-ins that took place, 24% against, while 9% remain unsure. In fact, whether out of exhaustion or actual shift in mind-set, one could observe more and more people increasingly returning to “normal” and non-political conversations in these most abnormal and political of times, though this obviously remains highly anecdotal and observational.

International focus on Egypt seems effectively to be waning, and the events in Syria and potential airstrikes against Assad are stealing a lot of the former global attention that was almost exclusively focused on Egypt. And while Friday’s pro-Morsi protest drew relatively better numbers than the quite surprisingly meager recent ones, they were still far from the Brotherhood’s famed amassing prowess and appeared substantially decentralized, suggesting the organizational capabilities of the Brotherhood have suffered considerable damage. The protest has also seen the omnipresent four-fingered yellow Rab’ia logo as well as an attempt to use more prominently slogans of “Reclaiming the January Revolution,” in an effort to try and entice more non-Islamists to join. But the branding effort seems to be scoring more points abroad and within the local base, while opposing Egyptians have made countless antagonistic and sarcastic takes on the logo, and the Brotherhood continues to appear trapped largely within its own support base.

Speaking of structures, the Brotherhood’s organization itself is under increased formal pressure. Its nongovernmental organization, registered in March, is facing very likely dissolution. The charity and social work of the Brotherhood remains its backbone and main source of popularity, and being crippled from doing it in one way or another would inflict damage on their reach. Of course, others would respond that the Brotherhood had already been banned for decades when it won around 40% of parliament, and they’d have a point. Still, their social activities were relatively tolerated under Hosni Mubarak, the condition within this new political order is anyone’s guess, but there is little reason under the current trajectory to assume they would have as much space.

So where does that leave the Brotherhood? There are three broad options, assuming the decapitated Brotherhood remains substantially standing, and some of which are familiar.

The first very “theoretical” option, yet again, is to suddenly come out and overall accept the current political road map, choose new leadership that might have some improved appeal, try to adapt to the imposing new realities in Egypt, minimize remaining potential damages as much as possible and try to ensure they remain an official part of the political road map while working on making sure their apprehended leaders and members get the best possible chance at fair legal treatment. While that would impose maximum political pressure on the administration and in front of global opinion, it would also carry the highest risk of internal implosion, given how volcanic the pro-Brotherhood and much of the Islamist base is.

Another possibility is to continue to maintain demonstrations, denounce the political road map and current transition, attempt to somehow increase public sympathies, try to avoid any violent or confrontational settings that could lead to further legal problems or public relations damage, then attempt to enter the parliamentary elections assuming there aren’t any impossible legal obstacles to do so. Right now, that seems most likely from this vantage point. It could better maintain the internal cohesion of the organization, not give the appearance of giving up, while also using the parliamentary elections as a way of officially returning into the political fray. The potential downside of this strategy is that it would largely just leave a weakened Brotherhood as a target for any potential further crackdowns or pressures for a substantial amount of time until such elections took place, while their continued protests could lead to confrontations that could be of further damage to their public image.

The third option is to continue to hope for their own “revolution” of sorts, that disapproval rises by time against the current political power in Cairo and that some of the more acceptable former revolutionary allies could “bury the hatchet” and rejoin forces either to create a new political reality altogether or to amend the existing one. While their rhetoric and actions seems — at least officially — to be focused on this direction in one variant or another, it remains the least likely option to materialize as things stand.

Meanwhile, in all three options, there would be some active anticipation and encouragement by the Brotherhood that international pressure could lead to an amelioration in the overall political situation and their position within it. But regardless of what the Brotherhood ends up doing, their first step must begin with a somber but necessary realization: The current strategy being employed is obviously marching toward the opposite side of any foreseeable or obvious victories of any kind, every potential strategy alternative carries substantial inherent risks within it, and the decisions taken now will largely determine the fate of an 85-year-old organization that only a few months ago was at the height of its power.