The Aftermath of 72 Tumultuous Hours in Cairo

Egypt’s January 2011 revolution is beyond restoration. 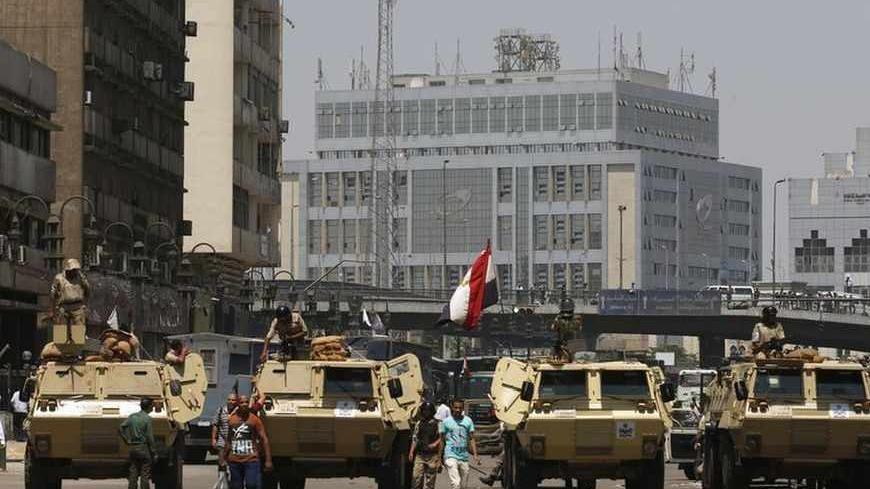 By the end of the most tumultuous 72 hours in Egypt’s recent memory — at least since the January 2011 revolution — hundreds, according to conservative official counts, are dead (including the son of General Guide Mohammed Badie, the daughter of Mohammed El-Beltagy and the grandson of the Brotherhood's founder Hassan El-Banna), and thousands are injured on the pro-Morsi side. More than 40 police members are dead, hundreds have been arrested and a few dozen churches attacked or torched amongst other sectarian-based attacks — the sheer volume of which is unprecedented (the army has said it plans to restore the damaged churches with its own resources). Buildings (government or otherwise) set ablaze, violent clashes taking place all over Cairo and the rest of Egypt, a strict and eerie curfew imposed upon most governorates, an incredible combination of impassioned cheers, deep shock and general gloom. It is still almost impossible to digest it all.

In fact, the volume, magnitude and velocity of events is beyond the capability of anyone alone right now to document, fathom or fully analyze. The somber chain of events occurring right now will probably last at least a few more days in one form or another and will have long-term tremors. And the one thing Egypt has increasingly forced upon observers is that it is almost impossible to predict anything with full confidence, at least anything of a long-term bearing. Yet, as things stand, one can try to make some preliminary readings, posing more questions than answers.

The current official political roadmap might now find itself subject to at least a time extension of some sort, if not stronger and more profound adjustments altogether. Anyone still hoping for a political process that includes the Brotherhood might as well recognize that this is now anything but likely. Between the prevailing antagonistic mood in the current administration and its supporters on one hand, and the pro-Morsi camp’s misadventures, strategic errors or blunders, as well as the mounting state of shock and anger inside the pro-Brotherhood base now, on the other, it is pretty much impossible to see any reconciliation taking place soon. In fact, the way things stand, the question of the continued existence of the Brotherhood itself suddenly feels less of an exaggeration than before.

The cabinet even announced today it was considering legally dissolving the Brotherhood (likely referring to the Brotherhood NGO registered in March, given the legal ban on the Brotherhood since 1954 had remarkably never been officially lifted) while the presidential spokesperson today gave what was seen as a largely inconclusive answer to that question. But, assuming any theoretical official decision to fully isolate the Brotherhood politically, how could that even effectively take place? Would at least the more junior and less influential Brotherhood members — a group whose most modest estimations are at least a few hundred thousand and a wider base of supporters — still be allowed to run in elections and be politically involved? Would political Islam struggle to maintain official political representation in post-June 30 Egypt, or would the difficulties essentially focus on the Brotherhood and allies?

The recent events will have a strong radicalizing effect on many belonging to the Islamist side, whether in general or with regard to views on the reconciliation of modern democracy and Islamism. The impact on Egypt's long term-security and the existence of a viable, democratic political process obviously cannot be underestimated. The Brotherhood also finds itself faced with an astoundingly difficult situation.

On one hand, the Brotherhood is faced with the combined power of an antagonistic administration, the media, the judiciary and a substantial number of people who seem to be confronting the Brotherhood in the streets out of their own volition. The Brotherhood is even facing the leaderships of the country’s top two religious institutions, the Coptic church and Al-Azhar. Most remarkably, a senior Al-Azhar leader and scholar, Dr. Ahmed Kreima, had reportedly declared that Al-Azhar’s council of Sharia scholars has deemed the Brotherhood apostates.

On the other hand, as the Brotherhood seemingly continues to lose control over its base, and and as supporters resort to open violence, their cause and any sympathies garnered are damaged, and the position of the government strengthened. The prevailing narrative in Egyptian media of an “Egypt Fighting terrorism” becomes more palatable for some than it previously seemed. The pro-Morsi alliance’s decision to hold daily marches within the coming week, though somewhat understandable as a way to maintain some public presence, would likely prove a strategic disaster. The likely outcome would be more violence — rendering further crackdowns — and a weaker political position. And, in a catch-22, while international condemnation and pressure on Egypt’s government might be one of the last cards that the Brotherhood has, the rise in local nationalist sentiment might actually cause this particular card to backfire.

Cairo has drifted further than ever from the US; local public sentiment could not be more hostile. Many on the anti-Morsi side feel the US is acting out of a desire to inflict direct damage upon Egypt, as it supposedly has brought upon the rest of the region, or to support a Brotherhood that is increasingly portrayed as a US proxy (omnipresent commentary in the media feeding that sentiment). On the pro-Morsi Islamist side, many feel abandoned by the US, and this side has historically not had very warm sentiments toward US governments altogether.

Judging by the statements and actions taken by the Egyptian government during the past 72 hours, Cairo no longer seems willing to be influenced substantially by Washington, Berlin or Brussels, and absolutely not Ankara. The government appears steadfast in its course. While some in the US might threaten cutting aid to Egypt, there is already a growing popular sentiment within the country that supports Egypt unilaterally getting rid of US aid and even severing the peace treaty with Israel. The large aid package from Gulf states, who have already pledged billions that dwarf annual US aid to Egypt (or the Sisyphean, long-negotiated IMF package), and have issued statements in support of the government in Egypt, has been a further emboldening element.

As the course of recent events further indicate, the US and Europe have been revealed to have much less practical leverage than they surely hoped. When it finally came down to it, the official responses of the US, Europe (with exceptions) and the UN Security Council have essentially stayed away from crossing any point of no return, and effectively send a message to Cairo that a profound political collision is still really the last thing on their agenda.

The growing ties between the military (and police), the former opposition National Salvation Front (NSF) and the media seems to be further cementing. Mohamed ElBaradei resigned from his position as vice president in protest of the crackdown on the pro Morsi sit-ins. The NSF, and even some in ElBaradei’s own party, were quick to distance themselves from the decision of their former leader, instead standing behind the recent actions by the government and security forces in Egypt. (NSF spokesman Khaled Daoud has also resigned after the statements were released, citing discontent with the current direction of the NSF and their lack of criticism of the extenct of force used by security forces.)

ElBaradei’s resignation also deals a blow to the narrative of January 25 and June 30 as one revolution with two waves, rather than the alternate view of two separate — and not necessarily complementary — uprisings. Meanwhile, it is quite hard to see ElBaradei politically rebounding. After facing a strong defamation campaign during Mubarak’s era, and a stronger one during Morsi's, he now faces wide condemnation from the June 30 camp, with regular accusations of treason filling the media, and some even calling for legal action against the former vice president. While his resignation might have shaken the image of the current administration in Cairo internationally, it is obvious that — as discussed above — few here really seem to care about that.

The private media, meanwhile, continue to unequivocally and unwaveringly stand behind the government. Criticism appears limited, and the idea of “Egypt versus the Brotherhood" (and "terrorism") dominates the airwaves. Alternatively, foreign media continue to fervently be seen by many as, or argued to be, either "not getting it right," while some are widely and even officially accused of being "biased to the Muslim Brotherhood."

Again, the one thing that is certain about Egypt is that nothing is ever certain. As things stand, it is now clear that January 25, as it once stood, is virtually beyond restoration. Politics have utterly failed in Cairo in favor of confrontation. Right now, the long-term implications for the security of Egypt and the immediate prospects of a normal democratic process in the country are anything but a cause for optimism.