Egyptian officials have reacted with anger to a US congressional resolution on the persecution of Copts in Egypt, laying blame on the Muslim Brotherhood and saying comments critical of President Abdel Fattah al-Sisi ruined Jan. 25 celebrations. 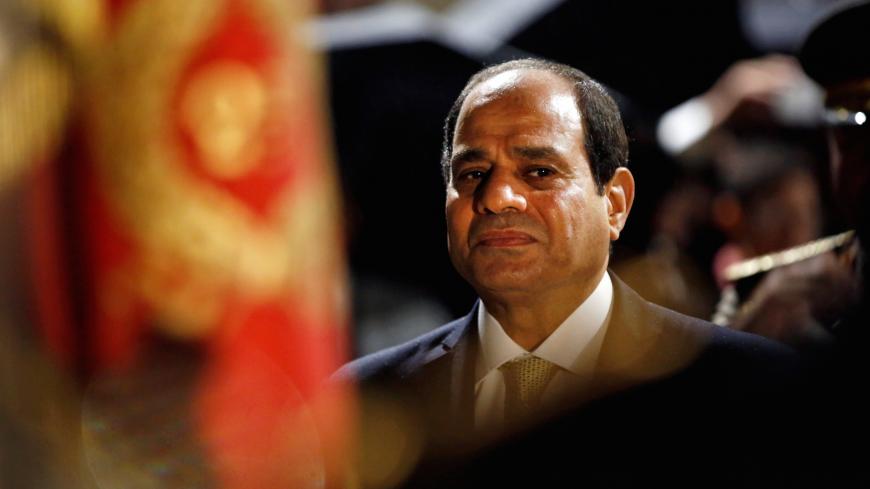 CAIRO — Egypt celebrated the seventh anniversary of the January 25 Revolution amid strong anger against what the government, parliamentary and political circles see as US interference in Egyptian affairs. In an official statement Jan. 24, the Egyptian Foreign Ministry accused Sen. John McCain of spoiling the Jan. 25 celebrations for Egyptians. The Egyptian foreign minister rejected what he termed McCain's "flimsy claims" and criticism of the fairness of Egypt's upcoming presidential elections, in which President Abdel-Fattah al-Sisi is running for a second term.

On the anniversary of the January 25 Revolution, McCain called for respecting "the spirit" of the revolution and Egyptians' democratic aspirations, adding, "Yet over the past few years, we have witnessed Egypt lurch dangerously backwards. President Sisi's unprecedented crackdown on political activism and fundamental human rights has led to the imprisonment of tens of thousands of dissidents, including 19 American citizens and nearly 3,500 young people."

He said all candidates for public office should have equal opportunity, but instead a growing number of presidential candidates have been arrested and forced to withdraw, citing a repressive climate and fear of further retribution. Without genuine competition, it is difficult to see how these elections could be free or fair, McCain said.

Meanwhile, the Egyptian parliament's Foreign Relations Committee drafted and sent an official response Jan. 22 to the US House of Representatives' resolution on Coptic issues, committee Chairman Tarek Radwan told Al-Monitor. Based on a memorandum by Coptic Solidarity, six members of the US House of Representatives introduced a nonbinding resolution Dec. 21 titled "Expressing concern over attacks on Coptic Christians in Egypt," which received bipartisan support. The resolution, which has not received a hearing, says Christians in Egypt are second-class citizens who face severe discrimination in the public and private sectors, in addition to being targeted by the Islamic State, particularly in Upper Egypt.

The draft resolution was widely rejected by Egyptians officials who believe the move reflects US interference in Egyptian affairs. The resolution called on Cairo "to enact serious and legitimate reforms to ensure Coptic Christians are given the same rights and opportunities as all other Egyptian citizens." Egyptian politicians and parliamentarians considered the US move as aiming to punish Egypt for voting at the UN Security Council against Washington's decision to recognize Jerusalem as the capital of Israel. The Egyptian Foreign Ministry representative in the Egyptian parliament, Wael Nasr, said the bill "does not worry Egypt. The Egyptian parliament is the only party that can hold institutions in Egypt accountable; no foreign parliament can."

The response, a copy of which Al-Monitor obtained, accuses the Muslim Brotherhood of spreading conspiracies, stirring up strife and inciting against religion in Egypt since it was founded in 1928. It said the Copts of Egypt are paying the price of their participation in the June 30 Revolution and have been targeted by the Muslim Brotherhood ever since the dispersal of the Rabia al-Adawiya Square sit-in on Aug. 14, 2013, as the group embarked on torching churches, nuns' schools and Christian service houses, and targeting Christian properties.

The response also referenced what it said was the Brotherhood's role in exploiting the January 25 Revolution to reach power, which paved the way for the emergence of extremist terrorist entities and groups, which exploit religion as a means to achieve suspicious objectives. In addition, it listed the repercussions of the dispersal of the Nahda and Rabia al-Adawiya sit-ins and spoke about how the Brotherhood focused on exploiting its crimes to convey one message to Western public opinion and its governments — that there is a conflict between Christians and Muslims in Egypt and convince the Western governments to interfere in the country

While the United States is accusing the current regime of marginalizing Copts, the Egyptian parliament's response denies this and blames the Brotherhood instead. The Egyptian response described the Brotherhood's rule in Egypt as the most bitter period for Copts who were marginalized, incited against and accused of thwarting the "Islamic Reawakening Project" and Islamic rule. After Morsi's ouster on July 3, 2013, the Brotherhood targeted Coptic gatherings as punishment for participating in the June 30 Revolution, attacking Coptic places of worship and Christian properties, the response added.

The response goes on to describe the support the Copts received from the Sisi administration, particularly in terms of promoting the principle of citizenship by giving representatives of the three Christian communities the chance to participate in drafting the 2014 constitution and issuing a new law on Aug. 30, 2016, to build churches.

The parliament's Foreign Relations Committee said Jan. 17 that it will be sending this response to the US Congress and several world parliaments, and will hold an international conference in Cairo to publicly reject the allegations and send a parliamentary delegation to meet members of the US Congress.

But Radwan told Al-Monitor that the committee decided not to go forward with those plans, and only ended up sending the Egyptian parliament's response to the US Congress, addressing the six members who introduced the resolution, so as not to exaggerate the matter.

Kamal Zakher, a Coptic author who writes for several Egyptian websites, including Al-Ahram, told Al-Monitor that while Egypt's Copts reject the idea of foreign interference in Egyptian affairs, one should see that the problems that Copts are facing are not limited to the leadership and the central government. There are real crises that Copts in remote villages face daily from poor local administration.

Apart from terrorist incidents, the construction of churches is often banned while others are being closed down, and individual fights often turn into violent clashes between Muslims and Christians.

"The solution to the crises plaguing the Coptic community in Egypt is to dry up the sources of strife and reconsider the educational curricula, the media and the social culture," he said.

"How is it conceivable that Sisi can inaugurate a massive cathedral in the new administrative capital Jan. 8, while a simple employee in a village in Minya can close down a church and forbid Copts from praying inside?" Zakher wondered.

Hafez Abu Seada, a member of the National Council for Human Rights in Egypt, agreed with the committee's response regarding Sisi's support of Copts. At the same time, he believes putting the blame only on the Brotherhood when it comes to Copts' rights in Egypt is wrong; it weakened the response and made it less objective.

"Radical Islamic political groups have been carrying out terrorist operations against Copts since the January revolution, and the attacks multiplied following the dispersal of Nahda and Rabia al-Adawiya sit-ins. But such operations are associated with ideologies adopted by IS and al-Qaeda, which is why it would not be right to put the blame only on the Brotherhood," Abu Seada told Al-Monitor.

Said Abdel Hafiz, head of the Egyptian Development and Human Rights Forum, insists that the US memorandum criticizing the human rights situation in Egypt is the Muslim Brotherhood's new poisonous tool that it conveys to the international community and the United States and its decision-making circles, all the while ruining Egypt's reputation.

In a Dec. 5 statement, the Egyptian Foreign Ministry accused the Tom Lantos Human Rights Commission in the US Congress of bias, just before the committee’s Dec. 6 hearing on the situation of human rights and freedoms in Egypt. According to the ministry's spokesman, Ahmed Abu Zeid, only American activists who opposed the Egyptian regime were asked to testify at the hearing.

As US criticism of Egypt's human rights situation is mounting, Egyptian officials' reactions have focused on implying the existence of a nefarious relationship between the US Congress and its members to the Muslim Brotherhood, questioning the US administration's reluctance to include the Brotherhood on its list of terrorist groups.