Head of the Salafist Jaysh al-Umma militant group in Gaza has called on Muslims to "stop the bloodshed by the tyrant Sisi." 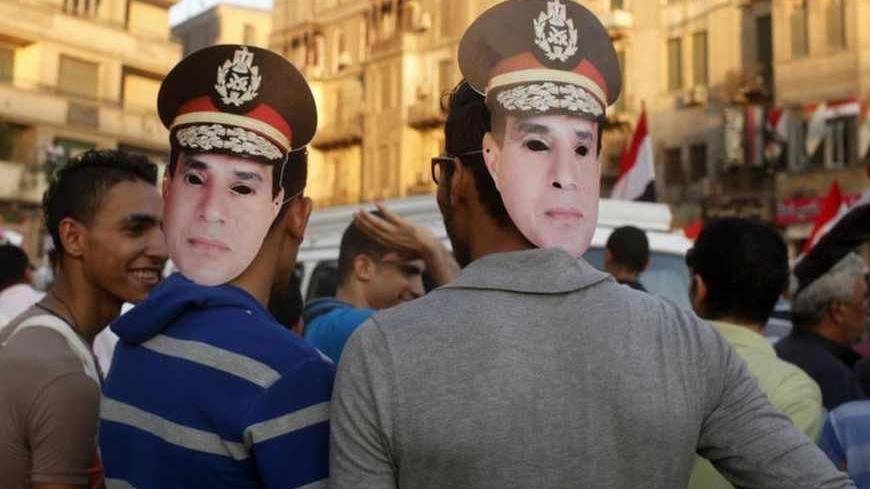 The emir of the Salafist group Jaysh al-Umma, or Army of the Islamic Nation, in Gaza, Abu Hafs al-Maqdisi, called for jihad in Egypt to save it from the rule of the so-called “New Pharaoh” — in reference to Egyptian Defense Minister Abdel Fattah al-Sisi.

In an exclusive interview with Al-Monitor, Maqdisi said, “We direct our message to our people in Egypt. You have to go out for jihad and lift the injustice and tyranny, and stop the bloodshed by the tyrant Sisi and his supporters. So get out and stay in the fields and public squares until Sisi — along with all his political, religious and military pillars — falls.”

Maqdisi denied any relationship between his Salafist group and the execution of 25 Egyptian soldiers who were shot dead in Sinai, saying, “There is no presence for us on the ground in Egypt or in the Sinai, and there is no coordination between us and the Salafist groups there. But we are joined together by the Islamic doctrine and the feeling of anger as we watch the blood being shed in Egypt, Syria, Chechnya, Morocco, Pakistan and in all the Muslim countries. We are required to take a stance that supports [the people whose] pure blood is being shed day and night to spread apostasy and to eradicate Islam.”

The Salafist leader accused Sisi’s regime of killing the soldiers in Sinai. “The operation happened in a location that was sensitive security-wise and that was not far from the army’s ambush, because they want to cover up the massacre that took place against prisoners [who were being transported] by a prison vehicle one day before the soldiers were killed in order to preoccupy public opinion. Perhaps they were dissident soldiers who refused to continue serving, so they were liquidated.”

Jaysh al-Umma is a militant Salafist group that belongs to the jihadist-Salafist current, which believes in armed jihad against the existing governments in the countries of the Islamic world and against external enemies. Other such groups in Gaza include: the Jaljalat, the Army of Islam, Jund Ansar Allah and the Mujahedeen Shura Council in the Environs of Jerusalem, which has claimed responsibility for multiple operations launched against Israel from the Sinai.

Although Maqdisi says that his group was founded 10 years ago, studies on Salafist groups state that the first mention of the existence of Jaysh al-Umma came in mid-September 2007, when the group claimed responsibility for mortar shells targeting settlements launched from east of Khan Yunis.

The most prominent operation attributed to him, which he claimed responsibility for on April 4, 2008, was a joint operation with the Nasser Salah al-Din Brigades targeting Israeli Internal Security Minister Avi Dichter. During these years, Maqdisi was arrested and interrogated more than seven times by Hamas security services. In one of these instances, he was detained for more than eight months, after having trained militants at one of his camps in front of reporters.

Maqdisi, who was last arrested by Hamas just over a month ago during his participation in a march in support of Jerusalem, said that it was time to “break our silence in Gaza” and “call on Muslims to wage jihad and on the Egyptian people to persevere in the squares and defend the innocent blood [being shed]. It is no longer a war against one party or group, but it has become a war on Islam. We foresee that the conquest of Rome [will happen] during this century and that the banner of Islam will rise over the White House at the hands of the mujahedeen, and if not at our hands then at the hands of our children, or our children’s children.”

Maqdisi had invited Gaza’s media outlets to a press conference on Thursday, Aug. 15, during which he expressed his hopes that one of Sisi’s bodyguards would kill him. The press conference comes after Salafist groups have stayed away from the media for more than a year, due to restrictions by the Hamas government. Other Salafist groups didn’t participate in the press conference. “There is no coordination with the rest of the groups in the Gaza Strip because it was arranged in a hurry, one day after the massacre of breaking up the Rabia al-Adawiya sit-in,” he said.

The events in Egypt have sparked a range of reactions from Salafist-jihadist groups that are affiliated with al-Qaeda. On Aug. 3, al-Qaeda broadcast an audio recording by its leader Ayman al-Zawahiri where he accused the US and the Gulf of masterminding the overthrow of President Mohammed Morsi.

Al-Monitor did not attend the press conference, and met Maqdisi for a one-on-one interview in a place of his choosing. He was surrounded by “the soldiers of Abu Hafs,” as they called themselves. “We don’t take permission from Hamas or wait for a permit from anyone. We take our permission only from our religion. We found the need for this conference after the massacres in Egypt. There is also the calamity of the futile negotiations with the occupation announced by [Palestinian Authority President] Mahmoud Abbas and the legitimization of the settlements. Since the start of the new negotiations, 4,000 housing units have been permitted,” he said.

Maqdisi filled the attendees’ cups with tea and he seemed to be a simple man, considering his words. “Last year, I spent 136 days in Hamas’ prisons. They only released me during the war because they evacuated the security sites. They returned me to prison, then they released me in December. Hamas still views the Salafists in an unfair and unjust way, robs them of their rights and prevents them from properly preparing for jihad against the enemy,” he added.

Jaysh al-Umma is at odds with the Muslim Brotherhood, one of whose extensions is Hamas. But that didn’t prevent the emir Abu Hafs from calling for jihad against Sisi, saying, “Not everyone who stands against Sisi is with the Muslim Brotherhood. The dispute between the Brotherhood and Sisi was a dispute over power. But when the dispute became over Islam by the leaders of the coup, it was necessary to take a stand. The battle with the Brotherhood effectively ended on June 30, and the battle against Islam started ... We used to be silent. But after Morsi was ousted and the secular forces took control, and the Muslims — not just the Brotherhood — started being excluded, we had no choice but to break the Salafist silence in Gaza and strongly condemn the targeting of all those who belong to Islam.”

He called on Egyptians to not adhere to Western slogans, which have increased the Egyptians’ humiliation. “Through the lie of democracy, the West is trying to control the lands of Islam via its agents. There are those who give [those Western agents] religious legitimacy, such as the sheikh of Al-Azhar and the grand mufti of Saudi Arabia, who have taken no stance on the Muslim lands or the crusades that the West is conducting there.”

In a question to Hamas about allowing the Salafists to organize a press conference, Hamas spokesman Sami Abu Zuhri told Al-Monitor over the phone, “There weren’t any press conferences by the Salafists in Gaza about Egypt. All what was reported in the media is not true. A press conference results in photos and videos. And that didn’t happen ... But there were some statements by one Salafist that were amplified and placed out of context. We have asserted, as the Hamas movement, that Gaza neither has nor will have anything to do with what is happening in Egypt ... We have emphasized, in the Hamas movement, that there is a consensus in Gaza about not interfering in Egypt. That consensus includes Salafist groups. And Hamas asserts that it doesn’t accept any Palestinian party interfering in Egyptian affairs.”