According to some, the death sentences issued against former President Mohammed Morsi and Brotherhood members in Egypt will push youths into joining extremist groups in Sinai. 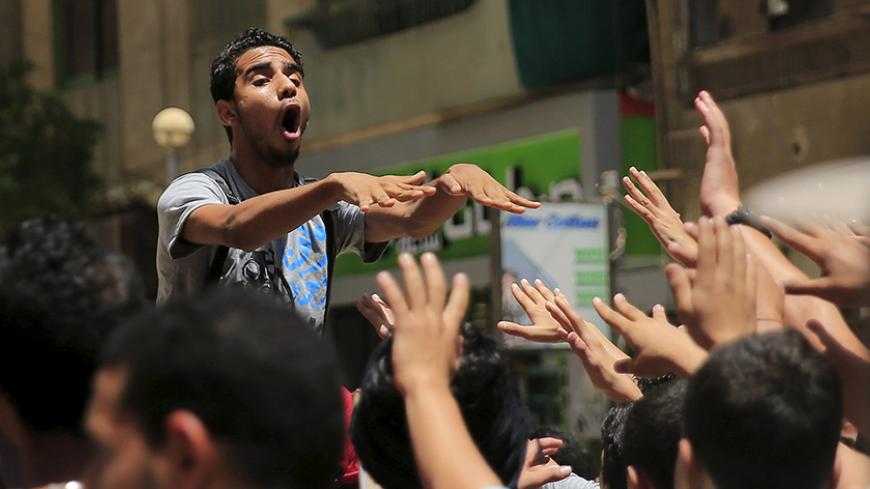 A supporter of the Muslim Brotherhood and deposed Egyptian President Mohammed Morsi shouts slogans against an Egyptian court's decision to sentence Morsi and other leaders to death, at a rally in Al Haram street near Giza Square, south of Cairo, Egypt, June 19, 2015. - REUTERS/Amr Abdallah Dalsh

RAFAH, Egypt — The death sentences issued June 16 against former Egyptian President Mohammed Morsi and 90 Muslim Brotherhood members raised the concerns of political parties on the continued violence in the Sinai Peninsula, with the possibility of this violence expanding across Egypt.

A sheikh from the Sawarka tribe, one of the largest tribes in Sinai, told Al-Monitor on condition of anonymity that Morsi’s death sentence will adversely affect Sinai. He said that the innocent people of Sinai will pay the price of the continued power struggle between the Egyptian army and the Brotherhood. According to the sheikh, the death sentences will translate into armed violence in Sinai.

Ansar Bayt al-Maqdis, which is loyal to the Islamic State (IS) and goes by the name of Wilayat Sinai, is involved in the current armed violence. However, the sheikh does not separate between this terrorist group and the Muslim Brotherhood.

“One cannot separate the Brotherhood from IS; the conflict began in Sinai when President Morsi was ousted, and ever since we have been paying the price of political conflicts that we have nothing to do with. The more violence and power struggles, the more extremist the Brotherhood’s youths become … [they] turn into human resources used by IS for its operations in Sinai. [This situation] may expand to all of Egypt, especially when new cells loyal to IS will emerge from the Brotherhood youths who resent the army’s violent actions toward them and their leadership — ever since the Brotherhood-affiliated president was isolated,” the sheikh said.

The jihadist — who defected from Salafist jihadism but still believes in the jihadist ideology — told Al-Monitor on condition of anonymity, “Jihadist groups classify the Brotherhood as democratic, whose way of ruling is no different than that of political regimes. There are fundamental differences, on both the systematic and doctrinal levels between the Brotherhood and the jihadists. It is a political group with an Islamic cover that aims at political reform, and does not mind the idea of ​​jihad, but under terms that are subject to political calculations and interests. The jihadists, however, believe that this [ideology] is a blasphemy and that those who follow politics and leave jihad are secular infidels, even if they constantly repeat Islamic slogans.”

The jihadist said, “The Brotherhood is the oldest organization that has the most experience in lobbying human resources. It educates its cadres from childhood, teaching them jihadist slogans and explaining to them the [importance] of establishing an Islamic caliphate and applying Sharia. [They say], 'Allah is our objective, the prophet is our idol and the Quran is our constitution; jihad is our fate, and death for the sake of Allah is our highest aspiration.'”

He added, “This is how the Brotherhood is the main generator of jihadist groups, as I previously mentioned. Complicated political differences often emerge between the Brotherhood and its political opponents, such as the harsh violence [campaign] launched by the Egyptian army against the Brotherhood. These political differences reached their peak following the bloody Rabia al-Adawiya massacre. When such incidents occur, the Brotherhood youths rush to come up with mobilizing jihadist slogans and deviate from the Muslim Brotherhood’s path. They either turn to extremist [organizations], such as IS, or they turn to the radical right or convert to atheism when they realize that the jihadist and religious group [they belong to] cannot protect them from death."

Al-Monitor noticed organized unrivaled satirical campaigns led by IS supporters on Twitter, following Morsi’s death sentence and the Brotherhood’s continued commitment to acting in a peaceful way. On June 3, a Twitter user wrote: “The Brotherhood wants war when it comes to the mujahedeen, and it wants peace when it comes to tyrants. Logically, they are Kharijites [first identifiable sect of Islam], because they kill the people of Islam and support heathens.”

IS supporter Abu Azzam al-Ansari wrote on Twitter June 16: “The peacefulness of the Brotherhood, on which it still insists, led its leaders to death and allowed its enemies to walk out completely innocent. Peacefulness is not accepted by beasts.”

Another user tweeted June 16 from a since suspended account: “One of the Brotherhood’s biggest lies is [their slogan] ‘We are advocates, not judges.’ They lied; they are advocates of the infidels and judges of the monotheists [in reference to jihadists]. Peace with infidels and war against the mujahedeen #Hamas_arresting_salafists” — which refers to the arrests carried out by the Brotherhood-affiliated Hamas government against Salafist jihadists in the Gaza Strip in early May.

A researcher concerned with Sinai affairs and armed groups told Al-Monitor on condition of anonymity, “It seems that the ruling military regime does not want stability in Egypt. After it killed hundreds of Brotherhood members in the Rabia al-Adawiya massacre and arrested thousands of young people, it has now sentenced to death the ousted president who took office in a legitimate way, as well as other Brotherhood leaders. As if this regime is telling Brotherhood youths, 'Your peacefulness is not doing you any good and you should resort to violence.' This is a very bad move that confirms the regime’s ignorance in reading maps and conflict equations in the neighboring countries and the fact that Sinai is subject to this equation.”

The researcher said, “In fact, the ruling military regime in Egypt provides IS in Sinai with winning cards, as if to tell the group, 'Now you can fix the deficit resulting from your lack of human resources, and we can supply more resentful Brotherhood youths.'”

He added, “The chronic crisis in Sinai and its surroundings is the result of a small armed group [Wilayat Sinai] that has no more than 100 fighters. According to my information, there is [mostly] a deficit in human resources to carry out suicide attacks. Therefore, Wilayat Sinai is trying to attract suicide bombers to carry out operations of great quality. The biggest trophy for Wilayat Sinai is to attract resentful Brotherhood youths and use them in such operations.”

The researcher believes that Wilayat Sinai relies on extensive plans to attract young people in the Brotherhood through media campaigns and the mobilization of young people who are susceptible to jihadist slogans.

The researcher said in regard to Wilayat Sinai’s attempts to attract young people in the Brotherhood, “First, Wilayat Sinai carried out terrorist attacks in Sinai and dedicated them to whom it called Haraeir Misr — in reference to the female Brotherhood members in detention. The organization also mocked the Brotherhood’s silence instead of protecting their honor. Second, several recordings to mobilize were issued, criticizing the Brotherhood leaders’ calls for a peaceful struggle, while showing the bloody massacres the army committed against them and [Egyptian] soldiers allegedly fighting Islam and jihad. Third, Wilayat Sinai claimed responsibility for the assassination of three judges in el-Arish May 16, immediately after the verdict to refer Morsi’s file in regard to the death sentence to the mufti. Fourth, a massive campaign was launched on social media, questioning the Brotherhood’s intentions and goals and asking Brotherhood youths to join Wilayat Sinai."