The Gaza-based interior minister has formed the community police unit to solve disputes among individuals and families in a bid to ease the process in regular courts. 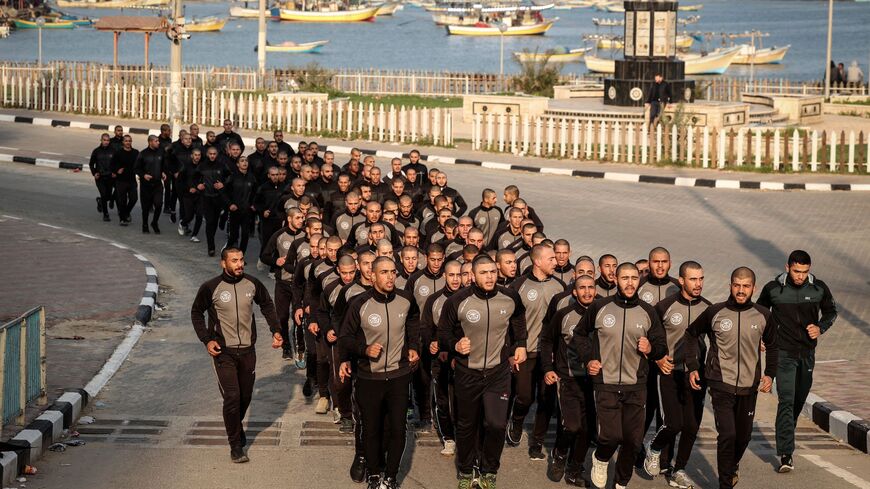 GAZA CITY, Gaza Strip — The newly established community police affiliated with the Ministry of Interior in the Gaza Strip started its work in early June.

The move comes after a decision issued by the General Administration of the Palestinian Civil Police to establish the community police unit on May 16, with the aim to reduce the load of civil affairs presented to courts, which usually take long years to be settled due to the low number of judges in the Gaza Strip.

Wiam Matar, director of the Community Police Department, told Al-Monitor that the community police has several tasks, notably achieving rapprochement between the police and the community, finding amicable solutions between feuding parties — whether they are individuals or families — and working to remove the causes of negative social phenomena such as family quarrels through workshops and meetings with notable people from the families.

Matar explained that the community police are adopting friendly methods to achieve their tasks away from official procedures by meeting with the parties to the conflict and mediating to reach a solution acceptable to all parties and avoid resorting to regular courts.

Matar indicated that the role of the community police ends if the parties to the dispute do not accept the proposed solutions. The dispute is then settled through official legal procedures that begin with the civil police force preparing a file for the complaint that includes the nature of the dispute and its precise details, then transferring it to the Public Prosecution, he explained, adding that the dispute then turns into a judicial complaint examined by regular courts.

To achieve its goals and address citizens’ complaints, the community police established partnerships and networks with all segments of society, namely clans and mayors, nongovernmental organizations, human rights centers and all police stations in the Gaza Strip, Matar said.

According to the latest statistics published by the Palestinian Central Bureau of Statistics on Oct. 6, 2021, the number of cases examined by regular courts in the Gaza Strip during 2020 amounted to 111,424 cases, 67,519 — or 60% — of which were settled.

There are 76 judges working in the regular courts in Gaza, according to the annual report issued by the Supreme Judicial Council in the Gaza Strip for the year 2020.

The work of the community police appears to be very similar to the work of the tribal and customary judiciary, which intervenes to adjudicate the problems of citizens and families as an alternative to the regular judiciary.

This similarity may push litigants from members of society to resort to the community police instead of the tribal judiciary, especially since the advantage of the community police is that its members have an official governmental capacity, and they are police officers in the first place. On the other hand, members of the tribal judiciary, who are arbitrators or reconciliatory figures settling people’s cases, do not have any official or governmental capacity.

The tribal judiciary is known for the harsh penalties it imposes on perpetrators and aggressors, and its penalties extend not only to the perpetrator of the offense or crime but also to all members of his family — old and young, women and men — which makes some of the tribal judiciary’s penalties rise to the level of “collective punishments” that violate human rights norms.

The most prominent of these punishments is “eviction or jelwa,” which means forcing all family members of the offender or aggressor to move from their places of residence to other locations as collective punishment.

On Oct. 6, 2021, a workshop organized by the Ministry of Interior in Gaza City recommended putting an end to clan punishments and tribal customs against the family of the perpetrator, which include revenge and taking matters into their own hands.

Issam Younes, director of Al Mezan Center for Human Rights, told Al-Monitor that the idea of ​​establishing a community police is a pioneering and impressive idea in Gaza, as it will reduce the crowding of judicial complaints in regular courts in light of the high number of such complaints and the few judges remaining in the enclave.

He added, “The community police may also be an option for citizens to abandon resorting to tribal judiciary, which they resort to because of its speed in settling cases and complaints within several days or a few weeks, while [official] litigation may extend to several years in regular courts.”

“But what is wrong with the tribal judiciary is that some of its punishments amount to collective punishment, which violates human rights," Younes said.

A lawyer and coordinator of one of the human rights program in Palestine, who wished to remain anonymous, praised the establishment of the community police as an alternative to the tribal judiciary.

The lawyer said, “The establishment of the community police is necessary to get rid of the backward punishments of the tribal judiciary that should not continue to be used in a civilized society that is more developed than it was hundreds of years ago.”

Courts and the law
Gaza