Traditional methods of conflict resolution continue to dominate the Gaza Strip in an effective but potentially inconsistent traditional system. 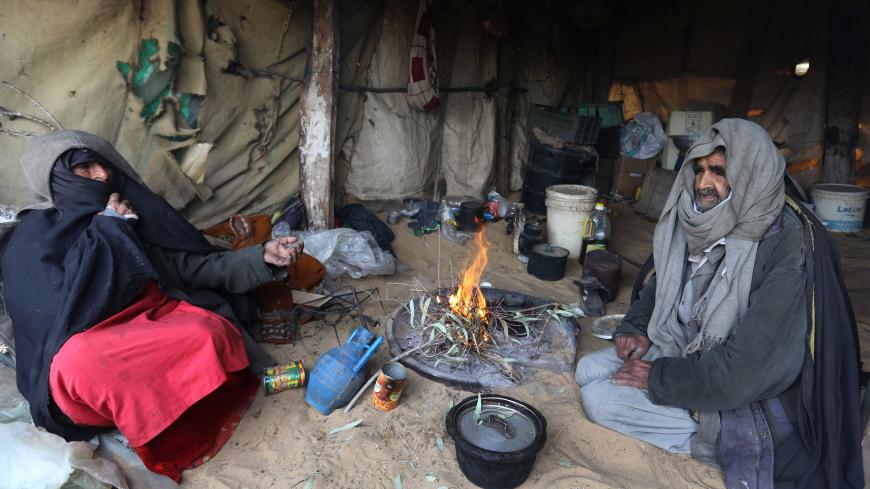 Palestinians from a Bedouin tribe sit in a tent around a fire to warm up in a Bedouin area south of Gaza City, Gaza, Jan. 7, 2015. - MAHMUD HAMS/AFP/Getty Images

Tribal arbitration for the settlement of community problems and crimes before elderly members and dignitaries has long been the norm in Palestine, both in the Gaza Strip and the West Bank. But over the past decade, more Palestinians have been turning to the traditional process, which is not without its drawbacks.

On March 18, an 18-year-old man allegedly raped a 5-year-old girl in the Sabra neighborhood in central Gaza. Tribal arbitrators met with family members of the accused, and, among other conditions, the arbitrators and the parents of the victim called called for banishing the man's entire family from the neighborhood.

In another case, on Nov. 9, a 15-year-old boy from the al-Dagas family living in al-Faluja, northern Gaza Strip, accidentally killed another boy during a fight. The Dagas family has been forced out of its home in accordance with the provisions of the tribal arbitrators.

“This is a case of manslaughter. Yet the entire family, the boy’s father and uncles, were evicted from their house [for fear that] the victim’s family might act in reprisal against them,” Tariq al-Dagas, a relative of the accused boy, told Al-Monitor.

“Tribes have played a negative role. The case was not resolved. We demand that the law be followed. We are ready to respond to the demands of the victim’s family according to the law and Sharia. As things stand now, our punishment is twofold: first, the accused young boy is facing jail time and second, his family will have to pay blood money and face displacement.”

Ashraf Abu Rakhia, director of the Center for Studies of the Northern Palestinian Desert, told Al-Monitor that tribal arbitrators often advise the families of the accused to move to avoid escalation.

“Arbitrators request the banishment of the concerned families as they fear that the clan of the victims might act in reprisal, which has happened before in cases of murder, rape and mutilation. Families could be evicted temporarily or permanently,” he added.

Abu Rakhia said tribal arbitrators in the Gaza Strip deal with thousands of cases a month. “Tribal arbitrators and judges are not at odds. Given the tribal nature of Palestinian society, citizens prefer to rely on tribal dignitaries and their swift decisions, which have strong guarantors within tribes and clans."

Tribal arbitrators and dignitaries in the Gaza Strip work with the support of the authorities, including the attorney general. Frequent meetings are held between them and the General Department for Tribal Affairs under the Ministry of Interior that handles related issues.

According to the tribal affairs department and the Ministry of Interior, the department reviewed over 500 cases during the month of May 2016. These figures have been increasing every year: In January, 632 cases were referred to tribal arbitrators affiliated with the Ministry of Local Government, the PLO, the Fatah movement and the Muslim Scholars Association as well as local administrators, who often help settle minor disputes.

Abdel Monem al-Tahrawi, a project manager at the Palestinian Center for Democracy and Conflict Resolution, said the tribes’ role is to supplement law enforcement in the absence of a strong rule of law.

“Palestinians tend to resolve matters and find settlements according to customs and traditions. This makes the litigation process faster. Under these circumstances, the law cannot abolish the role of clans but can limit it in many cases, restricting it to social issues. Tribal leaders and other arbitrators do not seek to undermine the law, but their work ought to be codified,” Tahrawi told Al-Monitor. “I do not agree with the deportation of entire families for a single person's offense. Those who have committed wrongdoing ought to be held accountable, legally or socially. But unfortunately, customs and traditions remain primary,” he added.

According to custom, banishment is one of the consequences of murder or serious harm, according to lawyer Abdallah Sharsharah. He told Al-Monitor, “In the first scenario, the family of the accused chooses to evacuate their houses, while in the second they are forced to do so by intermediaries who often believe that this is in the best interest of the tribe.”

He went on, “The evacuated families are therefore not allowed to be present in certain areas, which is obviously a barbaric and illegal act. Article 11 of the Basic Law prohibits the restriction of the freedom of movement of any person without a court order. Similarly, Article 20 of the same law provides for the liberty of movement and freedom to choose one's residence.”

From this perspective, Sharsharah believes that the tribal arbitrators can cause harm, as their interventions are often not done in accordance with the law.

“Any arbitration ought to be based on fair provisions and criteria in line with international standards. Formal judicial laws, for instance, guarantee fair trials between litigants. Normally, the judge is an unbiased person who does not follow a certain political party. This is not the case with tribes and clans, which are dominated by political and tribal loyalties. This is not to mention that under the regular law, litigants … can appeal the court judgments, which is not the case with tribal laws.”