Tribes in the northeastern Syrian province of Hasakah agreed to set up a tribal judiciary system as an alternative to the official judiciary affiliated with the Kurdish-led authorities running the area. 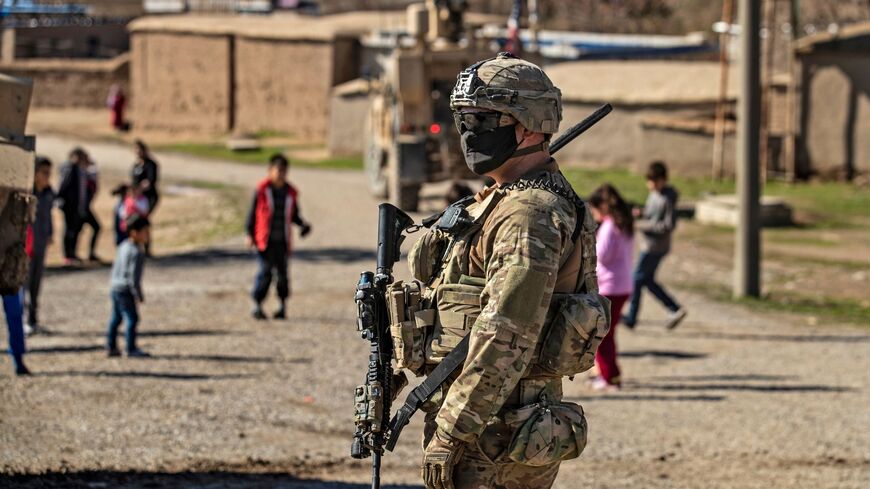 Tribes in Syria's Hasakah province agreed March 26 to set up their own judicial system. Here, children play near a US soldier during a patrol near Malikiyah (Derik) in Hasakah on Feb. 2, 2021. - DELIL SOULEIMAN/AFP via Getty Images

ALEPPO — Representatives of the Kurdish, Yazidi, Arab, Syriac and Assyrian tribes in northeast Syria agreed March 26 to establish a tribal judicial system — locally known as Madbata — for the resolution of inter-clan disputes, robberies, revenge and lootings in the Jazira region in Hasakah province. The House of Notables of North and East Syria convened the tribal meeting.

Activists in Hasakah shared on social media the text of the agreement. It says, “Some recent poor practices, such as thefts, robberies and roadblocks in the Jazira region, have prejudiced societal interests and relations." Eighteen Syrian tribes signed the agreement, including the Jabour, Baggara, Tayy, Sharabeen, Aqeedat, Mshehdeh, Maamrah, Dulaym, Waldah, Naim, Harb, Adwan, Khwetneh, Shumar, Adwan, Ubayd and Tufaihiyeen.

The agreement, which consists of four articles, further states that if a thief is killed after his guilt has been proven, his blood has been wasted and his clan shall not claim any compensation. It also calls for “working effectively and seriously with tribal elders and notables in the Syrian Jazira region to cancel the payment of blood money for accidental death.” It also provides that the tribes and clans shall seek to put an end to all forms of armed manifestations and strive for a decent life for all Syrians.

Ahmad Ghannam, a tribal elder who signed the agreement, told Al-Monitor, “The Madbata consists of an ancient tribal tradition in the Jazira region. The first Madbata was set up in 1936 and consisted of a tribal court that developed tribal laws on blood money and the amount to be paid, the annulment or modification of some inherited customs and the resolution of tribal disputes and personal or group quarrels.”

He added that the current tribal judicial system is different in that it is in line with customs and traditions of the tribes that have changed throughout time. The common points between the older and the newer tribal judicial systems is their task to resolve revenge issues, crimes and blood money (financial compensation paid by a killer to the family of the victim).

Ghannam said that a Madbata includes written inherited social norms to settle disputes and sanctions and that various criminal, social and security cases are examined and resolved through the Madbata.

Ghannam said there are tribal laws related to deaths, be they premeditated or unintentional killings, to traffic accidents and to tribal and family disputes over customary practices. For example, what happens when a paternal male cousin who has a priority to marry his female cousin bars her from marrying someone else because he wants to marry her. In case the young woman declines to marry him, this problem would be resolved through the Madbata, and the problem would be settled after the tribal elders step in to convince the young man to let his cousin marry the one she wants, he added.

The Madbata is one of the most important judicial references under which the problems and disputes among the clans in the Jazira region are resolved. It consists of a set of laws and customs that serve as a constitution regulating tribal relations and overseeing the application of these laws that a group of tribal elders had agreed upon.

Muhannad Katee, an independent political author hailing from Hasakah, told Al-Monitor, “The tribal judicial system consists of a set of tribal laws and customs that serve as a guide in any criminal cases, violations or disputes among community members. The arbitrations and settlements are mostly made according to the Madbata, which determines the amount of blood money to be paid in any premeditated or unintended killings.”

Such a tradition has lately reappeared in the Jazira region due to the poor security conditions and the lack of an effective and impartial judiciary in the Hasakah areas under the control of the Kurdish-led autonomous administration of north and east Syria.

Ghannam said, “The tribal judiciary system is not corrupt. The legislators and tribal elders strive to do justice to the litigants and always seek peaceful solutions to resolve problems with minimum losses. They issue laws that do justice to the wronged. That’s why they are trusted by the tribal community and the people resort to them, instead of the official judiciary, to have their disputes resolved in their jurisdictions.”

Abdulaziz Khalifa, a journalist for the pro-opposition Baladi news agency, told Al-Monitor, “The tribal judicial system in Hasakah province will positively affect the local community in the absence of any role by the official judiciary in that region. The autonomous administration-affiliated judiciary is futile and most of its judges are unqualified and do not hold a university degree in law. Rather, they studied philosophy or literature and hold a degree that has nothing to do with law.”

He said the Madbata existed in the Jazira region prior to the outbreak of the Syrian revolution in parallel to the regular courts  affiliated with the Syrian regime. The tribal customs and social laws were sought to solve problems and disputes that could not be resolved under the official laws, Khalifa said.

Firas Allawi, journalist and editor-in-chief of Alsharq News Network, which monitors news in Deir ez-Zor and eastern Syria, told Al-Monitor, “The chaos and insecurity in Hasakah and the various parts of Syria, which have been under extraordinary circumstances for 10 years, have encouraged the tribal power, laws and judiciary to emerge as they seek to bring relative security and stability and regulate social relations in the absence of judicial and executive authorities capable of achieving justice.”

Allawi added, “This system of tribal judiciary is not limited to the Jazira region where the Syrian Democratic Forces are in control. It is also adopted in the regime-held and Free Syrian Army-held areas. The de facto authorities usually allow such a tribal judiciary to be in place, given the important role it plays in achieving societal peace and security."