Palestine's tribal court system may offer speedy justice, but it is also known for harsh penalties that amount to collective punishment and other human rights violations. 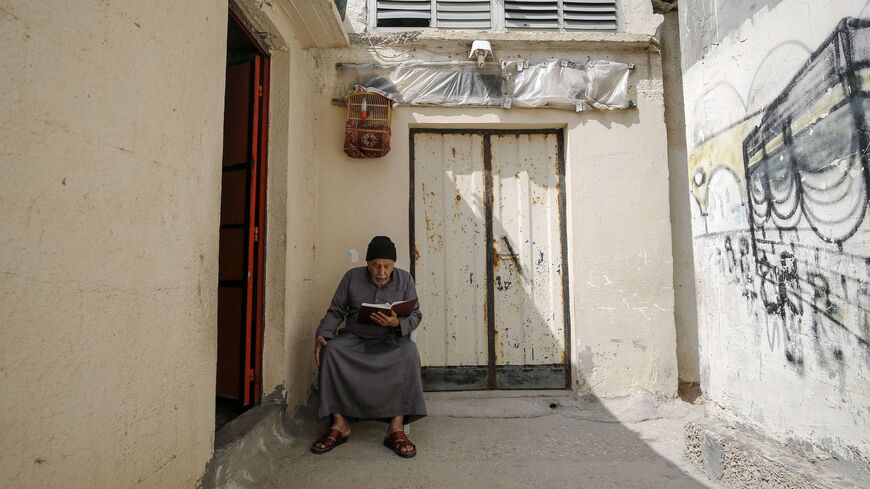 A Palestinian refugee elderly man reads the Quran during the holy month of Ramadan outside his house in Gaza City's Al-Shati refugee camp on May 15, 2020. - MOHAMMED ABED/AFP via Getty Images

GAZA CITY, Gaza Strip — Many Palestinians take their conflicts and long-standing disputes to tribal courts, which are known for moving quickly to issue rulings. The official court system generally takes much longer, sometimes years, to decide on a case.

Community elders, dignitaries and the heads of families occupy an informal but prominent position in the tribal judiciary system, which settles disputes between individuals and families in cases and complaints ranging from verbal abuse to murder.

In 1979, the Palestinian National Council in Amman established the General Directorate of Tribal Affairs and Conciliation. In 2005, the directorate was placed under the Palestinian Ministry of Interior to coordinate between the ministry and the members of the tribal judiciary.

Tribal courts include arbitrators, who have extensive knowledge of tribal laws and play the role of judge. An elder represents a family that is party to the conflict, and conciliators attempt to resolve the dispute peacefully and prevent the parties from seeking revenge. Each family holds elections on a regular basis to choose an elder to represent them in court if needed.

However, the tribal judiciary is also known for harsh penalties that may affect not only the perpetrator of the assault or crime, but all members of his or her family. Some of the tribal courts’ punishments are so severe that activists often describe them as a form of collective punishment in violation of human rights.

Forced relocation, for example, removes all family members of an aggressor from the area in an effort to avoid friction between them and the victim’s tribe.

The tribal judiciary also gives the victim’s family time to vent their anger for a period of three days, during which violence and arson are common.

On Oct. 10, the Hebron-based Palestinian Association for Empowerment and Local Development held a workshop on tribal justice and human rights. The participants — local rights activists, arbitrators, conciliators, members of civil institutions and representatives from the Hebron municipality — called for an end to tribal rulings that disregard civil values and civil law. Participants also stressed the need for the tribal judicial system to honor women's rights.

Another workshop was organized by the Ministry of Interior in the Gaza Strip on Oct. 6 to discuss Sharia-based and legal procedures in cases of murder. The participants recommended eliminating tribal punishments such as blood revenge.

This workshop was attended by the undersecretary of Gaza’s Ministry of Interior and National Security, Maj. Gen. Nasser Mosleh, as well as his assistant Sami Nofal and the director of the security forces in Gaza Maj. Gen. Mahmoud Abu Watfa, in addition to a number of elders and dignitaries in the Gaza Strip.

Baha Matar, one of the most prominent tribal arbitrators in the Gaza Strip, told Al-Monitor, “The rulings and punishments of the tribal judiciary are very different from the rulings issued by the regular courts, which usually involve imprisonment or fines.”

He added, “Tribal courts do not issue imprisonment sentences. Usually the aggressor is forced to pay exorbitant sums of money to the victim [or victim’s family] to settle the dispute between them.”

Matar elaborated, “Tribal courts, for example, would force the aggressor to pay the victim a sum of 1,000 Jordanian dinars (about $1,400) for each step he took from his home to the victim's house. This means the aggressor can be forced to pay thousands of dollars even if the assault was just a slap in the face.”

In cases of murder, he said, the tribal courts require retribution. “Even if the victim's family decides to pardon the aggressor, the latter still has to pay the family blood money, which can reach 35,000 Jordanian dinars [about $50,000], in order for the dispute to be resolved.”

The deputy director-general of the General Department of Tribal Affairs at the Ministry of Interior in Gaza, Alaa al-Din al-Aklouk, urged tribal arbitrators not to inflict exorbitant tribal penalties, especially when it comes to unintentional killings.

Aklouk told Al-Monitor that “unjust tribal rulings, such as forced relocation or burning the homes of the aggressor's family," are "unacceptable.”

“The Ministry of Interior respects and recognizes the rulings of tribal courts. But it does not agree with some rulings that are considered harsh, such as forced deportation or burning the properties of the aggressor’s family.” He said that the Ministry of Interior rejects these practices and called on tribal arbitrators and elders not to apply punishments that violate human rights.

Program coordinator Mamoun Atili told Al-Monitor, “Although tribal justice is a long and rigid tradition, efforts must be exerted to develop this system to be more compatible with the civil rights system in Palestine, more in compliance with human rights charters and in line with the Palestinian Basic Law.”

Atili called on the official judicial system to work against the harsh rulings issued by the tribal judiciary. He stressed the need for the executive, judicial and legislative authorities in Palestine to take a clear position on tribal practices such as forced relocation.

“Training on human rights and civil values in line with the Palestinian Basic Law should be provided to the leaders of the tribal judiciary, such as conciliators and arbitrators,” he said.

Matar expressed doubt that the efforts of civil and official institutions to amend the tribal judiciary laws would bear fruit. He said, “The customs of the tribal judiciary are sacred. They have been passed down through generations. Amending these laws is like demolishing a sacred archaeological place.”