Known for their efficiency and simple procedures compared to the official judiciary, tribal courts hold a significant position among Palestinian families in the Gaza Strip who resort to them to resolve their disputes. 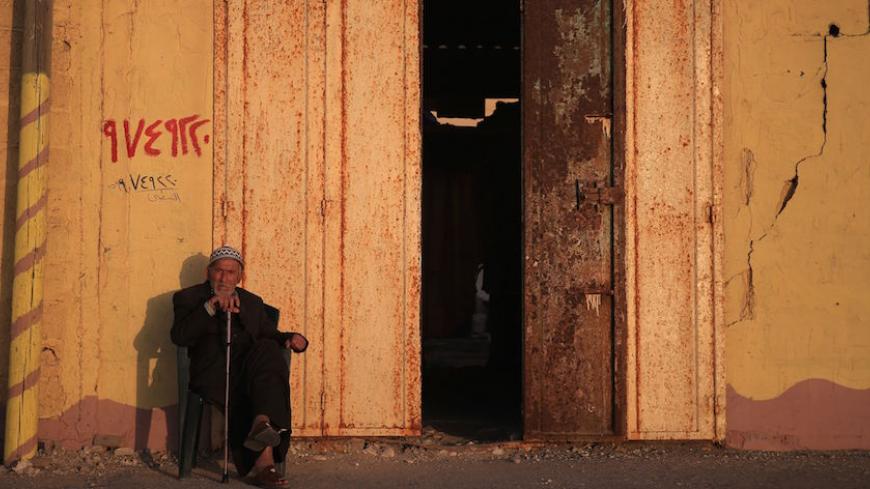 A Palestinian man sits outside his home in Gaza City on May 25, 2016. - MOHAMMED ABED/AFP/Getty Images

GAZA CITY, Gaza Strip — Considered as a pillar of social stability, tribal and customary courts hold an important position among Palestinian families when it comes to settling conflicts and ending long-standing disputes between them. Plaintiffs and right holders prefer to bring their cases before tribal councils because of their speed, issuing their rulings within a few days or weeks. Official courts usually take longer, sometimes years, to decide on a case.

Tribal courts normally consist of several parties, none of whom holds an official status. Arbitrators (muhakkim) are one such party who, because of their extensive knowledge in tribal laws, play the role of a judge. An elder (mukhtar) is the person who represents a family that is party to the conflict at the tribal council, and conciliators (rajul islah) are a group of people who attempt to resolve the dispute peacefully to prevent litigant families from pursuing a vendetta. Each family holds elections on a regular basis to choose an elder from among the family members.

Ahmad Zaareb, the elder of the Zaareb family in the Gaza Strip, told Al-Monitor, “Tribal courts [use] a set of rules and customs established by ancestors when their tribes were governed by tribal customs. This set of rules aimed to resolve disputes peacefully in order to avoid bloodshed that in turn would entail a vendetta. These rules and customs were transmitted by one generation to another, forming a way of life for families in the past.”

Describing how tribal courts work, Zaareb said, “When a problem involving two families arises, conciliators are immediately brought in to meet with the two families’ elders, in the house of one of the family elders brokering the reconciliation, to prevent any violent reaction by other family members. Conciliators then demand a three-day truce [hudna] so they can call upon arbitrators to hold a tribal court with the aim of resolving the dispute peacefully.”

Zaareb explained that the defendant family offers the claimant family a sum of 5,000 Jordanian dinars ($7,000) called “atwa” or “minha,” as acceptance of the truce and promise to refrain from any vengeful act before solving the dispute peacefully.

“Throughout this period [three-day truce], the tribal court holds sessions during which arbitrators first listen to a representative from the claimant family and then to that of the defendant family. Arbitrators subsequently issue their rulings, which are usually severe and costly in order to bring justice to the family of the victim,” he said.

Zaareb said that the rulings and sentences issued by arbitrators in tribal courts differ from those of the official courts, which usually sentence the aggressor to prison. In this regard, Zaareb said, “Tribal courts do not imprison the defendant. Instead they impose financial compensations. For example, if a man attacked another, tribal courts order the attacker to pay 1,000 Jordanian dinars for every step he took from his house to the victim’s home, which serves as deterrent punishment for the assailant.”

The aggressor has to pay this amount to the victim. If he suffers economic hardship, he might have to sell his property or his wife’s jewelry, or borrow the amount from his relatives. Usually this payout is used by the victim for the treatment of physical or material damages that resulted from the assault. If the victim was not seriously injured, according to the custom, the victim has to return said amount to the aggressor after several years, should the latter prove significant remorse for his action and show respect for the victim.

“In murder cases, tribal customs cannot resolve the conflict without bloodshed. This is why they encourage recourse to formal justice to punish the murderer who may be sentenced to death. However, should the family of the victim decide to forgive the killer, it would be through tribal courts, which order the killer to pay a fine called 'diyya' of 35,000 Jordanian dinars to finalize the pardon and reconcile the two families,” Zaareb said.

In tribal courts, the conciliator’s role consists of brokering a mediation between the disputing families to resolve the dispute peacefully. The head of the conciliation department at the Palestinian Scholars’ League — a nongovernmental organization in the field of tribal courts — Salem Salamah, told Al-Monitor, “The league includes 500 conciliators who are carefully selected by the league’s board members. On a personal level, they are individuals characterized by a sense of virtue and discretion. Furthermore, conciliators are high-status, trustworthy and respected people among families. They should also have extensive knowledge in the customary rules and traditions of Palestinian families.”

Salamah explained that conciliators significantly contribute to reducing the large number of cases brought before official courts by resolving them in tribunal courts. He said that formal justice suffers from a large number of pending cases, with only 45 judges dealing with the cases and complaints of nearly 2 million people in Gaza.

Salamah added that tribal courts in Palestine are more prestigious than official ones given the fact that they derive their power and significance from inherited traditions and customs. Moreover, the rulings issued by arbitrators in tribal courts cannot be overturned due to the high esteem these individuals enjoy in the public eye, which makes the tribal judgments equal to official judgments issued by regular courts.

On Jan. 22, 1979, the Palestinian National Council in Amman decreed the establishment of the General Directorate of Tribal Affairs and Conciliation, which was the first official Palestinian body to be entrusted with organizing tribal jurisdiction. In March 2005, this institution was affiliated to the Palestinian Ministry of Interior.

The director general of the directorate, Hussein al-Sarhi, told Al-Monitor that his directorate was established to organize tribal jurisdiction through monitoring and following up on all conciliation committees and clans in the Gaza Strip, ensuring that they are operating within the framework of tribal law. The directorate issues conciliators special ID cards to simplify their tasks at all governmental and nongovernmental institutions.

The head of Gaza’s Court of Appeal, Omar Nofal, told Al-Monitor, “Although the judgments of tribal courts are separate from those of the regular judiciary, they are respected by formal courts and seen as binding should they be approved by both litigants.”

He added, “Any of the conflicting parties may challenge the decision and has a right of appeal. This is when two different arbitrators issue the new judgment, which is binding for both litigants." He stressed that regular courts are in charge of enforcing the decision of the tribal courts.

Despite the exorbitant punishments imposed on the families of the aggressor as per the tribal decisions, aggressors find themselves eventually bound to pay such large amounts to spare the blood of their family members against any acts of retaliation, which could be even more violent than the assault itself. Thus, tribal courts are viewed as an effective means to preserve peace in the Gaza Strip.