Ahead of Biden visit, Israel redoubles efforts to isolate Iran

While continuing its creative campaign to isolate Iran, Israel’s leadership also puts efforts into constructing relations with Saudi Arabia and advancing an aerial-intelligence alliance in the region. 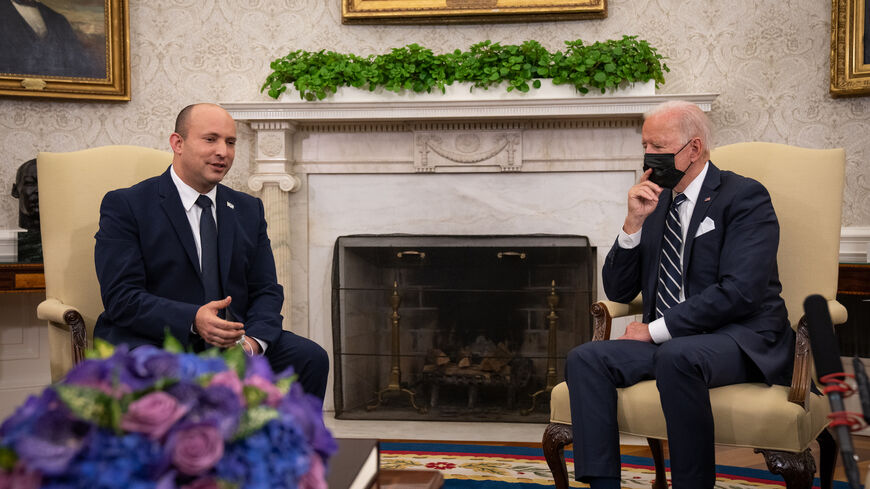 After a week of continuous struggles to keep his coalition afloat, Prime Minister Naftali Bennett clearly awaits desperately the visit of US President Joe Biden. Bennett is like a man wandering thirsty and hungry through the desert in search of direction. Biden is expected to arrive to Israel next week, but the Americans have yet to publicly announce the date of the visit. Officials in Jerusalem understand the uncertainty, but are convinced the visit will pan out.

Preparation for the visit include efforts for some form of breakthrough in the level of relations with Saudi Arabia. An upgrade is also in the cards for the proposed joint aerial warning system between Israel and its allies in the region in the form of an ad hoc alliance against Iran.

As mentioned, Bennett is in dire need of these achievements as his fragile government fights tooth and nail to survive the Knesset’s summer session ending July 31.

If it makes it through the coming eight weeks without being felled by an opposition vote of no-confidence or falling apart by its own hand, its prospects of lasting for another year are quite good, as are those of Alternate Prime Minister Yair Lapid becoming prime minister under his job-sharing agreement with Bennett.

Failure to survive would mean renewed consecutive election cycles of the kind Israel experienced between 2019 and 2021 without any bloc of parties gaining the required majority to rule. Bennett wrote as much in an open letter he published this morning. In reference to former Prime Minister Benjamin Netanyahu, Bennett warned that the country was once again at a “historic crossroads,” forced to choose between moving forward “with a functioning state, or to descend again into chaos, internal hatred, external weakness and the enslavement of the state to the needs of one man.”

Bennett’s most prized achievement would be a much-enhanced agreement with Iran on its nuclear program, which he believes will inevitably be signed at some point despite the latest delays. In internal discussions, Bennett is no longer wary of determining that Netanyahu’s handling of the Iran agreement issue was hollow, failed and stupid.

The prevailing assessment is that a renewed signature by world powers on the deal with Iran was temporarily delayed due to Israel’s stand on the Iranian demand to remove the Islamic Revolutionary Guard Corps (IRGC) from the US list of terrorist organizations. Nonetheless, key officials also believe prospects of an eventual deal remain high and, as Bennett tells his people, Israel has to invest all its creativity and influence so that the document inked will be better than the one placed on the table in Vienna in early 2022.

How does Bennett define “better”? Not the way the Biden administration described their goal after the president took office — “longer and stronger.” Bennett dispatched his national security adviser Eyal Hulata to Washington earlier this week (he is due back on June 3) to present the administration with his new goal and try to get them on board.

According to diplomatic sources, Bennett is striving for an agreement that would block once and for all Iran’s military nuclear capability in return for a gradual lifting of all sanctions. What are the prospects of achieving this goal? Several months ago, Bennett would have dismissed them out of hand. These days, he intends to put up a fight. Everything is possible, he now tells his aides.

Bennett’s positive view stems from Israel’s success in convincing Biden to reject Iran’s demand on the IRGC, which he deems an important strategic achievement. Bennett believes it proved to the United States and world powers that Iran would not make good on its threats to walk out of the negotiations if its demands are turned down.

This is an important precedent. The West had perceived the Iranians as top-class negotiators in the tradition of a Middle Eastern bazaar — tough rivals with endless patience skilled at confusing their interlocutors and controlling the contacts between the sides.

Iran’s image in this respect took a blow with the firm US stand on the IRGC. “The Iranians threatened to walk out of the talks unless the IRGC was included in the agreement and removed from the terror list, and that did not happen,” a senior Israeli diplomatic source told Al-Monitor on condition of anonymity. “The Iranians, too, were proven to be susceptible to pressure and maneuvering, and just as interested as the Americans in reaching agreement, if not more so.”

The source added, “The situation in Iran is catastrophic in every way. The economy is not recovering, there are severe water and infrastructure problems, and the top leadership’s desire to reach a nuclear agreement is still very dominant.”

Another move designed to influence the negotiations was last week’s leak to the Wall Street Journal according to which Israel had proof that Iran stole classified documents from the International Atomic Energy Agency (IAEA) nearly two decades ago and used them to conceal its nuclear activities from international inspectors.

Bennett himself subsequently publicly confirmed the report and presented documents that Israel had apparently seized from Tehran in a bold 2018 operation. Israeli officials say Iran prepares sophisticated plans to lead astray the IAEA inspectors on each visit. The timing of the leak and Bennett’s subsequent confirmation were quite specific, ahead of the regular June meeting of the IAEA Board of Governors June 6. On June 2, IAEA Director Rafael Grossi arrived unexpectedly in Israel to meet with Bennett and top officials ahead of next week’s meeting.

Bennett says he is hoping to hand over proof of the Iranian fraud to the United Nations Security Council to serve as a deterrent to Iran. “Once this issue and the exposure of the Iranian fraud reach the Security Council, it blocks the Iranians and reins in their continued rush along the nuclear path,” a top Israeli diplomatic source told Al-Monitor on condition of anonymity. “That is exactly what is happening right now.”

Israel’s goal is to keep Iran isolated. As the top Israeli diplomatic source put it, “to stick Iran in the corner and expose its true intentions and fraud in order to present it with a dilemma — economic recovery or nukes.” Israel is realistic on this score given the other players involved — China is indifferent, Russia is busy with other head and stomach aches, the Europeans are impatient. The United States is the only remaining relevant player, and Bennett intends to leverage all of Israel’s influence with its many interlocutors there. This is my life’s mission, he has said.

Meanwhile, momentum has been building in efforts to upgrade ties with the Saudis and advance the above-mentioned aerial-intelligence system between Israel and other states in the region concerned about the Iranian threat.

On the Saudi front, Israel is trying to help Crown Prince Mohammed bin Salman rehabilitate his image in the West, badly tarnished after the 2018 murder of dissident Saudi journalist Jamal Khashoggi. Mohammed's interest aligns with Israel’s desire to obtain permission for commercial overflights through Saudi airspace, to open up the giant kingdom to Israeli business and increase other cooperation.

For the first time since Mohammed was relegated to pariah status, the Americans also have an interest in cozying up to the Saudis in order to convince them to increase their oil output to offset the shortages created by the war in Europe. The coming weeks will show how all these differing interests converge, or not.