With rhetoric and naval drills heating up in the Aegean Sea, even NATO is calling on the two allies to deescalate recent tensions. 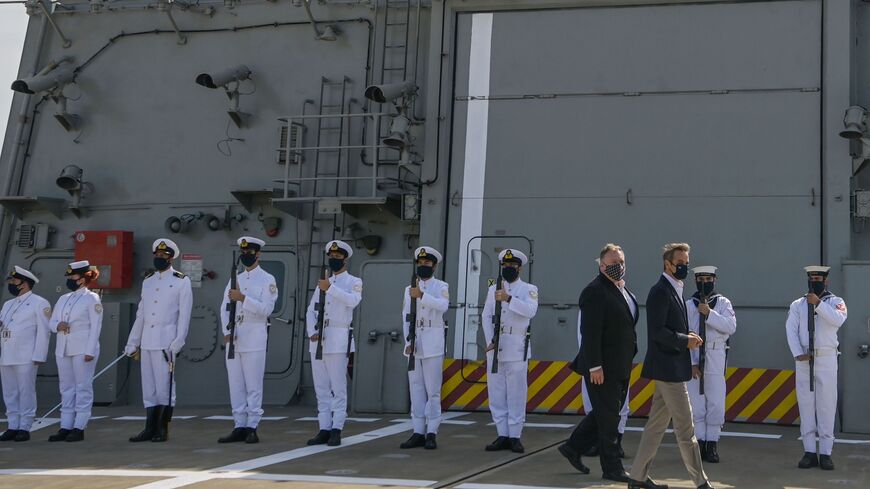 US Secretary of State Mike Pompeo (C-L) and Greek Prime Minister Kyriakos Mitsotakis visit the Greek Naval frigate Salamis during their visit to the Naval Support Activity base at Souda, the foremost US naval facility in the Eastern Mediterranean on the Greek island of Crete. US Secretary of State Mike Pompeo on Sept. 29, 2020, concluded a two-day visit to Greece on a tour of a strategically vital NATO base on a trip aimed at easing tensions between Greece and Turkey in the Eastern Mediterranean. - ARIS MESSINIS/POOL/AFP via Getty Images)

IZMIR, Turkey — With rival tweets in each other's language, military maneuvers that exclude each other and confrontations at NATO gatherings, ties between Turkey and Greece continue to heat up over the Aegean Sea.

Speaking to his party’s lawmakers June 15, Turkish President Recep Tayyip Erdogan warned Greece that “it would get hurt” if it continued to be “a bit player” in the attacks against Turkey. “We are aware of the historical game in which certain circles … spoil, encourage and set out Greece against Turkey,” he said. “ The problem is that Greece is [either] not aware of this scenario or is too happy to be a bit player in it. But it should remember that these bit players are the ones who get hurt the most and reap little benefit and recognition. This is what befell Greece in the past and will befall Greece in the future if it insists on making the same mistake.”

Erdogan’s words target a tweet by Greek Prime Minister Kyriakos Mitsotakis that “Greeks must feel completely safe” in the face of escalation with Turkey.  “Our country does not only have a strong deterrent capability, which I believe we have taken care to strengthen during these three years, but it also has powerful allies,” he tweeted.

Following a landmark defense agreement last year, France, one of the strongest allies of Athens in the Eastern Mediterranean, delivered fourth-generation Rafale air fighters to Greece, boosting the country’s air force. Similarly, a few days before Mitsotakis’ high-profile visit to Washington in May, the Greek parliament approved the renewal and amendment of a defense cooperation agreement with the United States. The amendments to the accord, made in 2021, extended the cooperation by allowing the presence of US forces in four more military areas, including two army camps in central and northern Greece and a naval base on the island of Crete. Turkey has been critical of both accords.

Turkish-Greek ties have been in a downward spiral ever since Erdogan announced that he “wrote off” Mitsotakis for lobbying against US military sales in Washington in May.

NATO Secretary-General Jens Stoltenberg on June 14 called on both sides to show restraint a day before the alliance's defense ministers meeting in Brussels. “We urge Greece and Turkey to solve their differences in the Aegean in a spirit of trust and allied solidarity. That means restraint and moderation and refraining from any actions or rhetoric that could escalate the situation,” he said in an interview.

But Erdogan and Mitsotakis, both facing elections within a year, have been locked in verbal swordplay on a long list of issues. A high-level bilateral mechanism was suspended last month, to be replaced by Twitter diplomacy.

"I warn Greece to avoid dreams, acts and statements that will result in regret. Come to your senses,” Erdogan said in a televised speech at the Ephesus2022 military maneuvers near the Aegean coastal city of Izmir. "Turkey will not renounce its rights in the Aegean and will not back down from using rights established by international agreements when it comes to arming islands,” he added.

His remarks were tweeted in Greek. Erdogan added, also in Greek, “The attempt to instrumentalize NATO and third countries, involving them in the illegality of various military exercises on islands which should be under a non-militarized regime, will have a disastrous end.”

The response came from Alexis Tsipras, former Greek prime minister and the leader of Greece’s socialist opposition party Syriza. “Greece will protect its sovereignty against any threat. So let the challenges stop and let us return to dialogue based on international law. The answer to the economic crisis we all face together is not nationalism,” he tweeted in Turkish.

“Turkey’s complaints … are completely irrational to the extent that they question Greek sovereignty over the eastern Aegean islands,” Mitsotakis said June 14. “I don’t think a single thinking human being — including in Turkey — believes that nowadays Greece can threaten Turkey.”

Mitsotakis said that “if basic sense prevails,” relations will not deteriorate further. “There is high verbal tension, but we don’t yet have — and I hope we don’t reach that point — tension in the field,” he said, referring to 2020 when both sides sent warships to the Eastern Mediterranean in a dispute over gas and oil exploration rights.

The two countries came to the brink of war only two years ago, as well as in 1996 over Kardak/Imia islet, with a landmass less than five hectares and uninhabited except for a few goats.

Both Brussels and Washington said that the Greek sovereignty of the islands was unquestionable. "The sovereignty and territorial integrity of all countries must be respected and protected."

Greece's sovereignty over these islands is not in question,” a spokesman for the State Department was quoted as saying by Hellas Journal Site.

Brussels also made a similar statement. “Greece’s sovereignty over these islands is unquestionable. Turkey should respect it, refrain from provocative statements and actions in this regard,” the European Commission said, describing Cavusoglu’s statement as “counterproductive” and contrary to de-escalation efforts between the two countries.

The EU statement also made a reference to the respect of international agreements, which both Greece and Turkey interpret differently.

Turkey says Greece has been building a military presence on the Aegean in violation of treaties that guarantee the unarmed status of the islands, both in the 1923 Lausanne Treaty between Turkey and the allied powers and in the 1947 Paris Peace Treaty that left the Dodecanese Islands to Greece.

On the other hand, Greece maintains that there are three categories of islands in the dispute. It says that the agreement on the demilitarization of the islands in the north (Lemnos and Samothraki) was annulled by the Montreux Treaty of 1936 — a point that Turkey denies. The middle islands (Lesvos, Chios, Samos and Ikaria) are mentioned in Article 13 of the Lausanne Treaty, but the article does not prohibit any specific kind of military installations, such as radar stations, nor limit the number of soldiers, says Greece. As to the Dodecanese islands in the south, Greece claims that Turkey is not part of the 1947 Treaty and thus has no right to invoke it.

Hasan Gogus, a former ambassador to Greece and a columnist for independent website T24, argued that of all the other disputes with Greece, Turkey’s hand is strongest in terms of international law in its call for demilitarizing the islands. But he said that questioning the sovereignty of the islands just went too far.

Pointing out that election times are usually tough in Turkish-Greek ties, Gogus said the who-is-more-nationalist contest started a bit early this time, citing Erdogan’s refusal to halt the high-level bilateral mechanisms between the two capitals and Mitsotakis’ visit to Kos as “pointless” moves.

Similarly, Erdogan’s “warning” last week from Izmir was carefully set to raise nationalist pride and irk Greece. The Ephesus2022 military maneuver, Turkey’s largest military exercise this year, coincides with the centennial of Izmir’s liberation from a three-year Greek occupation after the First World War. Defense Minister Hulusi Akar drove the point home last week. “It seems that Greece is not taking any lessons from history,” said Akar during the exercise participated in by the air, land and naval forces of 37 countries.

Erdogan claimed that Athens, which blocked Turkey’s participation in the NATO air drill known as Tiger Meet, had failed to persuade the participating countries not to take part in Ephesus2022. “All the invitees, including the United States, have shown up at Ephesus2022,” he said.

The Turko-Greek verbal clash also spilled over to the joint meeting of the Political Committee of the NATO Parliamentary Assembly and the Mediterranean and Middle East Special Group, which took place in Istanbul June 14. Greek lawmaker Manousos Voloudakis said that Turkish fighters violate airspace over inhabited Greek islands.

The Turkish defense minister shot back that it was the Greek aircraft which arrived on Turkish mainland on April 27 and violated the airspace. “You come from so many kilometers away, from mainland Greece to mainland Turkey, violating our airspace. What do you expect us to do? There are radar images; we have shared them with the allied countries. On April 28, we responded to these actions,” Akar said.

Akar also accused Greece of harboring militants of the outlawed Kurdistan Workers Party (PKK).  “Do not say no. Everyone knows about the ‘Lavrio camp’ in Greece.” The Lavrio Camp, located southeast of Athens, is a refugee camp but has become home for militants of the PKK, Turkey says.