Turkey, Greece escalate war of words as they drag in EU, NATO 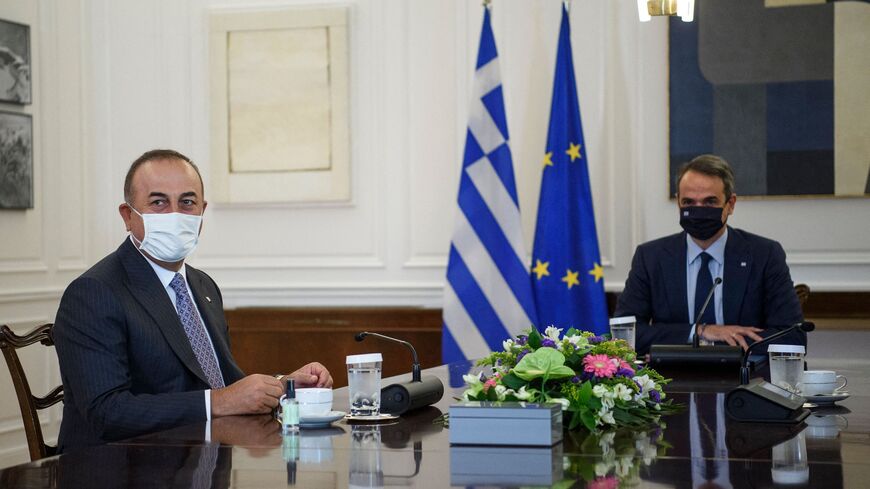 IZMIR, Turkey — The volatile waters of the Aegean Sea heated up again as Athens and Ankara sent dueling letters to the United Nations, the European Union and NATO, accusing each other of aggression, military threats and blatant violation of international law.

The most recent spat in the long chain of clashes was when Turkish President Recep Tayyip Erdogan accused Athens of violating Turkish airspace and undermining international agreements by unlawfully militarizing the Greek islands close to the Turkish coastline.

“Your occupation of the islands does not bind us. However, when the time comes, we will do what’s necessary,” he said at Teknofest, the country’s largest technology event in the northern city of Samsun. “We can come suddenly one night.”

“Coming suddenly one night” is, ironically, a line from a famous love poem. Written by romantic poet Umit Yasar Oguzcan, it was composed into a popular song by Rustu Sardag and sung by Emel Sayın. It became part of the Turkish political rhetoric in 1974 when radio commentators and columnists used it to refer to Turkey’s overnight military intervention in Cyprus following a coup ordered by the military junta in Greece. Turkey’s iron-fisted president, who has a soft spot for poetry, is fond of using the one-liner as he did during the Turkish military operation in Syria in 2016. He used it again a year later to warn Iraqi Kurds before a referendum for an independent state.

As he embarked on a three-legged Balkan tour this week, Erdogan repeated the same message: “They have islands in their possession; they have bases on these islands. If illegitimate threats against us continue, our patience has a limit.”

Turkish-Greek ties have spiraled downward since Erdogan announced that he “wrote off” Greek Prime Minister Kyriakos Mitsotakis for lobbying against the sale of F-16 fighters to Turkey in the US Congress in May. Since then, fiery rhetoric on both sides, accusations of sea and airspace violations, military maneuvers that exclude each other and confrontations at international gatherings have become recurrent in the bilateral ties.

So did mutual snubs, some of which bordered on the absurd. Greece stopped NATO land command from extending a congratulatory message to Turkey on Aug. 30, which is celebrated as Victory Day and marks the decisive military victory of Kemal Ataturk’s military forces in 1922 over the Greek army, which had occupied parts of Anatolia after the First World War. Turks see this victory, along with the liberation of Izmir from three years of Greek occupation 10 days later, as one of the founding blocks of the Turkish Republic founded on the ashes of the Ottoman Empire.

The Turkish Defense Ministry fumed with anger. "It is unacceptable for NATO Allied Land Command (LANDCOM) to delete the social media post celebrating the Aug. 30 Victory Day and Turkish Armed Forces Day by giving up its will upon a selfish and spoiled attitude of another NATO member," the Turkish National Defense Ministry said in a statement, referring to Greece. "Whether Victory Day is written [in a post] or not, the fact that we won a victory in 1922 cannot be changed," it added.

The next day, Turkey’s Defense Minister Hulusi Akar flew an F-16 fighter jet over the Aegean Sea, pledging to respond to Greek audacity “as Turkey has always done and will continue to do so.”

For the time being, Ankara and Athens seem to be focused on mobilizing international support for their cause rather than allowing the issue to spiral into military footsteps overnight. In a letter to key international actors on Sept. 1, Turkish Foreign Minister Mevlut Cavusoglu accused Greece of illegally claiming to have 10 nautical miles of airspace despite the width of the territorial waters in the Aegean being 6 nautical miles.

“Greece is the only country in the world that has non-overlapping territorial waters and airspace borders that are not recognized by any other country,” Cavusoglu said in the letters addressed to NATO Secretary General Jens Stoltenberg, EU foreign policy head Josep Borrell, UN chief Antonio Guterres and permanent members of the UN Security Council. He also sent letters to 25 members of the EU, excluding Greece, and Cyprus, which Turkey does not recognize.

“We have offered several ways to solve various issues that we consider are interrelated,” a diplomatic source told Al-Monitor.

Three days later, Greek Foreign Minister Nikos Dendias penned letters to Stoltenberg and Borrell, while the country’s permanent representative to the UN addressed a letter to Guterres. All of them, seen by Al-Monitor, criticized  Erdogan's references to the Greek “occupation” of Aegean Sea islands that have been part of Greece for decades and his recent rhetoric, which they claimed were “unprovoked, unacceptable and [insulting] against Greece and the Greek people.”

Athens said the Turkish overall attitude risks destabilizing the wider region and causing consequences of which the gravity is hard to assess, calling on the international community to “see it in its true dimensions” and “properly deal” with it.

NATO, Washington and the EU, worried about tensions spiraling out of control and leading to military confrontation, have repetitively urged restraint. The two NATO allies neared the brink of war only two years ago, as well as in 1996 over Kardak/Imia islet with a landmass of fewer than 5 hectares and uninhabited save for a few goats.

“At a time when Russia has again invaded a sovereign European state, statements that could raise tensions between NATO allies are particularly unhelpful,” a State Department spokesperson said when asked about Erdogan’s latest remarks, without naming him.

Borrell's spokesman, Peter Stano, urged Turkey rather than Greece to de-escalate tensions. “The continuous hostile remarks by the political leadership of Turkey against Greece and the Greek people raise serious concerns and fully contradict much-needed de-escalation efforts in the Eastern Mediterranean,” he said on Sept. 5. “The EU reiterates its expectation from Turkey to seriously work on de-escalating tensions in a sustainable way and fully respect the sovereignty and territorial integrity of all EU member states.”

Faruk Kaymakci, Turkey’s deputy foreign minister, responded with a tweet saying that any de-escalation and cooperation should include the Greek abuse of its veto against Turkey in the EU and the EU’s “blind support” of Greece.

Evangelos Areteos, a Greek journalist and research associate at the Turkey Programme of Hellenic Foundation for European and Foreign Policy (ELIAMEP), says that Greece has traditionally sought to get the EU — where it is a member and Turkey is a candidate — on its side. “But contrary to what Turkey believes, Greece does not believe that the EU sufficiently supports it against Turkey,” he said.

Areteos said that the new factor in the equation was US-Greek relations, which had been going through a historical high. “The anti-American sentiment in Greece — mostly seen on the left of the political spectrum but also, to some extent, on the right — has died down. Historically, Greece has never been closer to the US. By contrast, Turkey’s relations with the US are strained,” he said, pointing at this contrast as one factor that encourages the Greek government to mobilize its alliances.

Many analysts believe that the two leaders who face elections are using nationalist, populist rhetoric against each other to help boost their vote in the nationalist base rather than to escalate strains into an actual clash. Areteos wonders whether the battle with Turkey — or its spiraling out of control to actual violence — would really serve Mitsotakis electorally. “He came to power with the promise of prosperity and peace,” he said, explaining that escalating tensions with Turkey may be counter-productive at the ballot box next July.

Gonul Tol, director of the Middle East Institute's Center for Turkish Studies and the author of “Erdogan’s War: A Strongman’s Struggle at Home and in Syria,” also doubts whether Erdogan would benefit domestically from the Turco-Greek spat. “The rhetoric of arriving one night was used in Syria in 2016 to mobilize nationalist support,” she said in a program in Medyascope. “But this is no longer 2016; Greece is not Syria.” Moreover, she added, there is a new nationalist base mobilized by Iyi, or Good Party. “This group is much more sophisticated and has other concerns such as the immigration problem, corruption and democratization. They are not so easy to mobilize around belligerent rhetoric around Greece.”