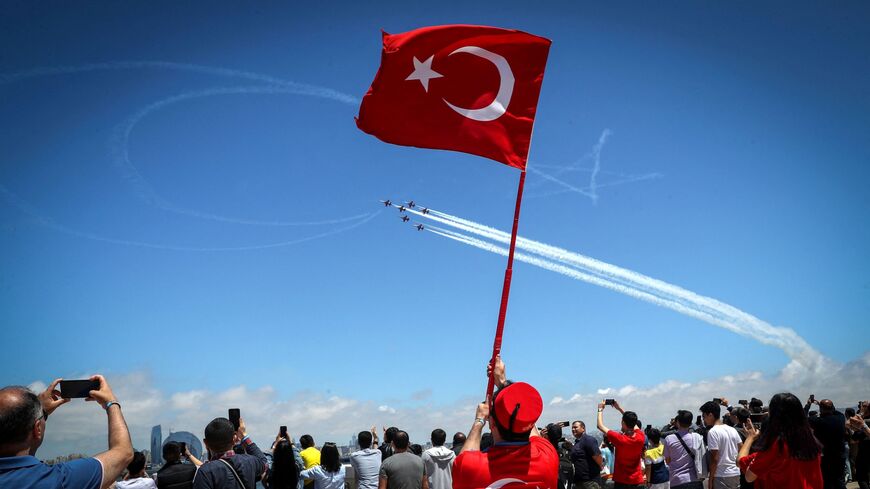 Turkish air force fighter jets create the national flag's star and crescent during the opening ceremony of Teknofest Azerbaijan in Baku, May 27, 2022. - AFP via Getty Images

Rising tensions between Greece and Turkey over a simple goodwill tweet indicates how alarmingly volatile the relations between two NATO allies are becoming.

Allegations that Greece’s Russian-made S-300 air defense batteries locked on Turkish jet fighters during a NATO mission in the Mediterranean Aug. 28 increased tensions between Turkey and Greece. The bickering morphed into a more serious escalation on Twitter a few days later.

On Aug. 30, NATO’s Allied Land Command (LANDCOM), the organization’s headquarters that is tasked with coordinating allied nations’ armies and based in the western Turkish city of Izmir, sent a tweet to congratulate the centennial of Turkey's Victory Day. But the LANDCOM account soon deleted the tweet after protests from the Greek government. While there was some fuss among Turkish users of Twitter, the whole thing was treated as what it was: A tempest in a teapot.

One hundred years ago on Aug. 30, the Turkish military had destroyed the occupying Greek forces in western Anatolia, marking the end of what became Greece's “Asia Minor catastrophe” and the military victory of Turkey’s “National Struggle/War of Liberation.”

Back to Sept. 1, 2022, a new tweet from LANDCOM said that the account had congratulated Turkey's Victory Day, even though the original tweet was gone. The second tweet inflamed Turkish social media. Adding insult to injury, Turkish Twitterati found the LANDCOM account's tweet from March 25 celebrating Greece’s Independence Day.

Defense and security analyst Arda Mevlutoglu tweeted back to LANDCOM on Sept. 1: “Why did you need to state that you celebrated on [Aug. 30]?” — pointing out the absence of the original tweet. Mevlutoglu followed up in successive tweets, also tagging the main NATO account: “Are you going to issue a statement on this [LANDCOM]? What is the reason for the deletion of the original message and posting a new one two days later?”

Even the Turkish Ministry of National Defense got into the fray: “It is unacceptable for [LANDCOM] to delete the social media post celebrating the August 30 Victory and Turkish Armed Forces Day by giving up its will upon a selfish and spoiled attitude of another NATO member,” referring to Greece. The tweet came with a much longer press statement that mentioned the Greek radar lock on Turkish jets on Aug. 28.

The affair has led some Turkish foreign policy experts to believe that Greece is trying to benefit from Turkey’s poor image in Western media circles.

In a follow-up interview with Al-Monitor, Mevlutoglu said, “It’s not about celebrating [Turkish Victory Day] or not. In LANDCOM and other NATO mechanisms, the Greeks are engaged in intensive anti-Turkey lobbying and activities. … I think they are trying to trigger a crisis.”

According to Serhat Guvenc, a professor of international relations at Istanbul’s Kadir Has University, Turkish-Greek relations are a puzzle. In an article for the independent news platform Medyascope, Guvenc pointed out how Greece and Turkey receive thousands of visitors from the other side each year and those visitors return home with extremely positive impressions of the other nation — but without any noticeable effect on the two countries’ bilateral ties. Relations are often tense.

Guvenc also argued that Greece was pushing for a crisis between Turkey and its NATO allies in a bid to extract major concessions from the new government in Ankara should Turkish President Recep Tayyip Erdodan lose the upcoming elections.

Meanwhile, Erdogan dialed things up on Sept. 3. Speaking at a technology festival in the Black Sea town of Samsun, Erdogan criticized Greece’s amassing of weapons into its eastern Aegean islands that are a stone's throw away from the Turkish mainland. In recent months, Ankara has upped the ante by disputing Greek sovereignty over the islands, arguing that arms buildup on the islands violates Athens’ past treaty commitments. Even more worrisome for the Greeks and the Americans, Erdogan uttered his now famed phrase on Sept. 3, “We may suddenly come one night,” a signal he uses whenever he has considered to mobilize the Turkish military — especially in Syria.

A senior Turkish official who is intimately involved in NATO affairs struck an even tougher line. Speaking to Al-Monitor on condition of anonymity, the official stressed Turkey's contributions to NATO for 70 years.

“Its contributions to the alliance missions and operations have always been significant from Afghanistan to the Balkans,” the official said, asking, “What did [Greece] contribute to NATO’s mission in Afghanistan for 20 years? Almost zero. Is it part of the NATO mission in Kosovo? It doesn’t even recognize Kosovo! As for the mission in Iraq? Nothing.”

The official continued, “Greece and its little cousin on the island of Cyprus are preoccupied only to prevent Turkey’s participation in EU activities or projects in the context of the EU’s Common Security and Defense Policy."

While there are clear indications that the United States is siding with Greece (Greek Prime Minister Kyriakos Mitsotakis’s speech to the US Congress in May is a case in point), and Washington is the most powerful force in NATO, Ankara is not without its friends. In the last two decades, Spain and Italy have provided key support for Turkish military modernization projects such as the amphibious assault ship TCG Anadolu and the T-129 attack helicopters. Turkey is now exporting the latter to third-party countries.

In the wake of Russia’s invasion of Ukraine on Feb. 24, Turkey has intensified its cooperation with the United Kingdom and Poland, which are vigorous in their support of Ukraine. British defense giant BAE Systems has provided critical support for Ankara's fifth-generation fighter jet, the TF-X / MMU. In 2021, Poland became the first NATO country to buy the famed Bayraktar TB-2 drones. Romania is also likely to purchase Bayraktar TB-2s.

Things may look bleak for Turkish-Greek relations and Turkey’s standing in Western media (and social media) right now. But irrespective of Erdogan’s domestic position or Ankara’s complicated foreign policy moves, Turkey’s regional power is bound to grow. Only prudent speeches and actions by Turkish leaders and their Greek, US and NATO counterparts could ensure that that process contributes to  rather than undermines global security.

One positive note on that front is that LANDCOM has not posted any new tweets since Sept. 1.