Row over militarization of Greek islands peaks with Turkish warning

Mevlut Cavusoglu has stepped up rhetoric over Aegean islands that Ankara says should be free of Greek arms. 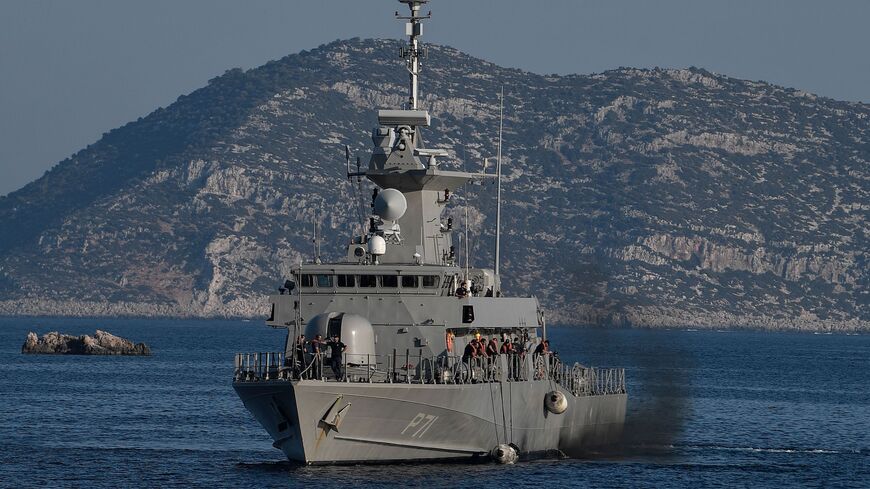 A Hellenic Navy ship patrols off the tiny Greek island of Kastellorizo (Megisti), in the Dodecanese, the furthest southeastern Greek Island, two kilometers (little more than a mile) from the Turkish mainland on Aug. 28, 2020. - LOUISA GOULIAMAKI/AFP via Getty Images

ISTANBUL — Turkey’s feud with neighbor and fellow NATO member Greece resurfaced Tuesday as Foreign Minister Mevlut Cavusoglu threatened to “do whatever is necessary” unless Athens reverses the militarization of its islands off the Turkish coastline.

“Greece needs to give up on this,” Cavusoglu told a joint news conference in Ankara with his Romanian counterpart. “Either they take a step back and abide by the agreements or we do whatever is necessary."

He went on, “It’s not possible for us to remain silent and insensitive to the threats against us. Greece should not forget this: He who sows the wind reaps the storm. If you don’t want peace, we will do what’s necessary.”

Cavusoglu’s remarks come after months of threats and counterthreats over the status of islands in the Aegean Sea, granted to Greece during the 20th century. Many of the islands lie within sight of Turkey’s western coast.

Greece and Turkey, which will both hold elections next summer, have quarreled for decades over the Aegean islands, many of them little more than rocky outcrops.

The disputes have previously focused on territorial claims and airspace rights, often resulting in naval confrontations and aerial dogfights. The countries have been brought to the brink of war on three occasions over the past 50 years.

This year Ankara has escalated complaints about Greece’s militarization of islands close to its shores, such as the Dodecanese chain that includes Rhodes and the eastern Aegean islands including Lesbos, Chios and Samos.

Cavusoglu reiterated Turkish claims that Greece is forbidden from establishing a military presence on the islands under the 1923 Treaty of Lausanne, which formalized peace between Turkey and the World War I allies, including Greece, and the 1947 Paris agreements that saw Italy cede the Dodecanese to Athens.

“Greece cannot arm them because these agreements are peace treaties and therefore Greece cannot bring weapons to these places,” he said, adding that continued violations of the treaties could led Ankara to challenge Greek sovereignty over the islands.

“We will continue to take the necessary steps both legally — within international organizations, especially the UN — and in the field,” the minister said.

Athens says its ownership is not conditional on non-militarization and says it needs to be able to defend its territory, pointing to Turkey’s sizable military presence on the Aegean coast, including a large fleet of landing craft.

Recent disputes between Turkey and Greece extend beyond the short stretches of water between their Aegean possessions.

Under a deal signed with the Tripoli-based government of Libya in late 2019, Turkey laid claims to wide swaths of the eastern Mediterranean, including the seas around the Greek island of Crete.

While the agreement was internationally condemned, it led to Ankara dispatching seismic research ships, accompanied by naval escorts, to search for gas deposits in waters contested with Greece and Cyprus in the summer of 2020. Greece responded by sending its own navy and air force to the area.

The standoff coincided with the reemergence of Turkey’s Mavi Vatan, or Blue Homeland, maritime doctrine, which was developed in the mid-2000s and advocates for a larger exclusive economic zone for Turkey in the Mediterranean and Aegean.

Amid calls for the European Union to impose sanctions on Turkey over its “provocations” in the eastern Mediterranean, Ankara withdrew its ships. The following year it resumed talks with Greece that had been frozen for five years to address differences in the Mediterranean and other bilateral issues.

The talks yielded little results and last May, Turkish President Recep Tayyip Erdogan declared that Greek Prime Minister Kyriakos Mitsotakis “no longer exists” for him, accusing Mitsotakis of trying to block sales of F-16 fighter jets to Turkey during a visit to the United States.

The following month Erdogan said Turkey had cancelled the bilateral platform, known as the High-Level Strategic Council, with Greece.

Cavusoglu said Tuesday that negotiations with Athens had been reinstated as “consultative” talks.

The minister also said Turkey had offered to put the matter before the UN’s International Court of Justice at The Hague but that Athens had refused.