After two years of Turkish courtship, and with Turkish Foreign Minister Mevlut Cavusoglu now on a historic visit to Israel, Jerusalem is willing to rehabilitate bilateral relations. 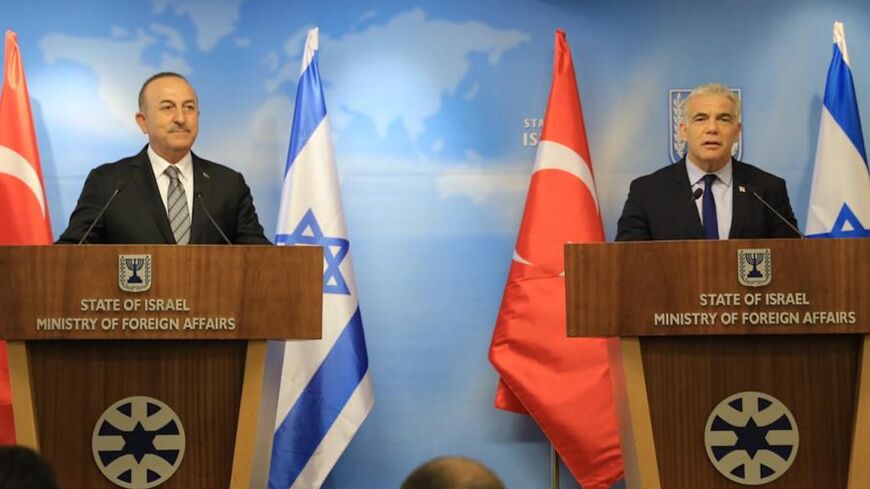 Turkish Foreign Minister Mevlut Cavusoglu visited this afternoon Jerusalem’s Old City and the Al-Aqsa Mosque on Temple Mount. His visit there was described as private, and he was not accompanied by any Israeli officials. Yesterday, sources at the Foreign Ministry said Israel is committed to freedom of religion and thus has no objection to a Muslim minister visiting Al-Aqsa. This evening, Cavusoglu met with the members of the Turkey-Israel Business Council and the Turkish Union in Israel association.

Minister of Foreign Affairs Yair Lapid met mid-morning with Cavusoglu at the ministry in Jerusalem. The two ministers then addressed the press. Lapid said that “Israel and Turkey are two regional powers, and more than that, two nations with a long, ancient and shared history. … We won’t pretend that our relationship has not seen its ups and downs. But we remember that Turkey was the first Muslim nation to recognize Israel back in 1949. And we have always known how to return to dialogue and cooperation.”

Lapid noted that following the visit, both he and Cavusoglu expect to see progress in diplomatic, security and economic bilateral relations. “In our conversation today, we agreed to relaunch our Joint Economic Commission and to begin working on a new civil aviation agreement between our countries. Beyond diplomacy, Israelis simply love Turkey. Every day, tens of flights depart Israel for Turkey with thousands of Israelis who love your culture and music, beautiful beaches and colorful bazaars.”

“We agreed that despite our differences, the continuation of a sustainable dialogue would be beneficial. And this should be based on mutually respecting each other’s sensitivities. This would be beneficial not only for our bilateral relations, but also for peace in our region, and today during our discussion, we also exchanged views on regional issues,” said Cavusoglu at the joint press conference.

In an apparent reference to tensions on Temple Mount during April, he noted that during the last month of Ramadan, the dialogue established on the level of heads of states contributed to the efforts to maintain calm. He also stated that Turkey remains committed to the two-state solution. Yesterday, Cavusoglu visited Ramallah and met with his Palestinian counterpart, Riad al-Maliki.

The Turkish minister announced that technical committees between government agencies on both sides will now work to advance bilateral relations and that he will be happy to see Israeli carriers flying to different destinations in Turkey.  Like Lapid, Cavusoglu put much emphasis on developing economic relations, especially in tourism, but also in other fields such as high tech. He noted that despite the coronavirus pandemic and other obstacles, mutual trade between the countries reached $8 billion last year. Turkey, he said, exported to Israel at the amount of $1.8 billion this first quarter of 2022.

Cavusoglu’s visit to Israel is the first of its kind in 15 years. Relations between Ankara and Jerusalem had deteriorated significantly since Recep Tayyip Erdogan was elected president, and especially since the 2010 Mavi Marmara flotilla to Gaza, where nine Turkish nationals were killed by IDF fire. Since then, Erdogan repeatedly attacked Israel, mostly in the context of the Palestinian cause and also concerning Jerusalem, with some of his statements bordering on antisemitism.

Still, for the past two years, Ankara had shifted its policy, striving to repair relations with Jerusalem. These efforts by Turkey culminated with the invitation extended to Israel’s President Isaac Herzog to visit the country. His March 9 visit to Turkey established Herzog as Erdogan’s preferred interlocutor within the Israeli arena.

Herzog tweeted today, “I congratulate Foreign Minister Yair Lapid and Turkish Foreign Minister Mevlut Cavusoglu on an important visit also on the regional level. I sincerely hope that Israel-Turkey relations will move forward, toward a promising future of trust and good neighborly relations. These collaborations can and should have an impact on the eradication of hatred and terrorism, and on the stability of our region.”

Before the meeting at the Foreign Ministry, Cavusoglu visited the Yad Vashem World Holocaust Remembrance Center in Jerusalem. In a message he wrote in the guest book of Yad Vashem, Cavusoglu vowed that Turkey will fight antisemitism and Islamophobia, noting that "racism and hatred of the other remain significant threats and Turkey vows to continue its fight to eradicate." Cavusoglu also wrote that "we are proud of the fact that Turkey was a safe haven for those who escaped persecution," including the actions of Turkish diplomats who "saved the lives of many Jews at the risk of their own lives."

Dr. Hay Eytan Cohen Yanarocak of the Jerusalem Institute for Strategy and Security (JISS) is one of Israel’s most important experts on Turkey. Yesterday he said that "Turkey is trying to show the United States that it has abandoned its provocative policy on the Middle East. The weakness of its economy plays a very significant role in this decision."

A senior Israeli diplomat told Al-Monitor on condition of anonymity, that "while Israel is very well aware of the different motivations pushing Turkey in our direction, we appreciate all the positive signals and actions undertaken by Ankara in the past few months and are committed to do our best to rebuild our relations with them, especially on the economy."