Although Egypt is being adversely affected by the war in Ukraine, the Suez Canal is benefiting greatly from Western countries sailing into the Gulf in search of oil. 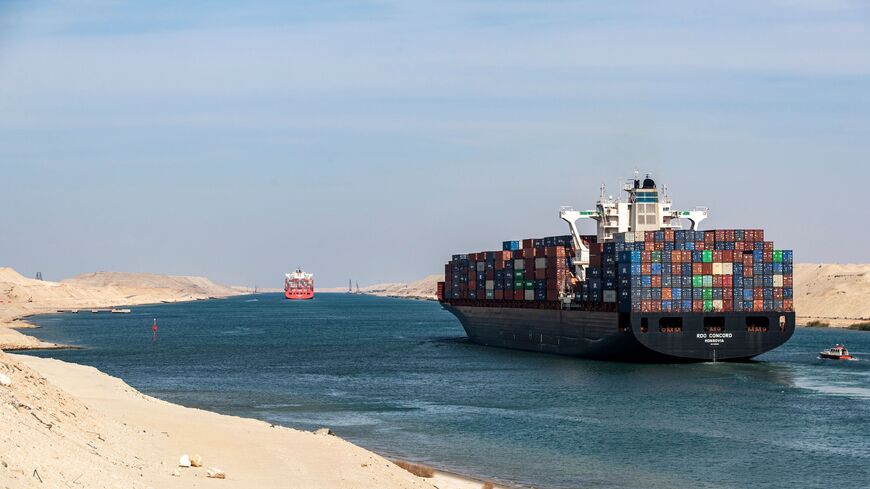 This picture taken on Nov. 17, 2019, shows the Liberia-flagged container ship RDO Concord sailing through Egypt's Suez Canal in the canal's central hub city of Ismailia on the 150th anniversary of the canal's inauguration. - KHALED DESOUKI/AFP via Getty Images

CAIRO — While the war in Ukraine is adversely affecting Egypt, it is a different story for the Suez Canal. It earned the most revenue in its history due to the influx of Western ships passing through it in search of oil and its derivatives.

The Suez Canal made its highest monthly revenue ever in April with $629 million. The canal's navigation had seen the transit of 1,929 ships that month, compared to 1,814 ships in April 2021 — a difference of 115 ships and a 6.3% increase. Also, 114.5 million net tons were carried throughout the canal — the largest monthly tonnage in the canal’s history, as the waterway authority stated May 1.

Osama Rabie, head of the Suez Canal Authority (SCA), told Al-Monitor in a written response that the Russia-Ukraine war caused the crude oil trade to change, resulting in an increase in oil tankers transiting the canal. “Due to the trend of reducing imports from Russia, northbound trade increased mainly as a result of a rise in European and Canadian imports from the Arab Gulf. Meanwhile, oil traffic heading south has increased due to Russia's tendency to export oil to Asia, far from Europe,” he said.

When it comes to liquefied natural gas (LNG), Rabie said that more gas now transits the Suez Canal heading north from the Arab Gulf region to Europe. "This trend is likely to continue," he added. Also, LNG tankers heading from Russia, the United States and North Africa to Asian countries have seen a “relative increase.”

Rabie said the war has also resulted in a surge in dry bulk commodities being shipped from Asia and Australia to Europe — especially coal, iron and steel — due to a shortage of imports from Russia and Ukraine.

According to Rabie, the crisis in Ukraine is not the only factor contributing to the increase in the canal's revenues. There's also the increase in transit fees by 6% beginning in February 2022 as well as the extra fees for transiting ships, except cruise ships, in March and again this May. “Revenue from these additional fees is expected to exceed $500 million per year,” he added.

The Suez Canal is one of the world's busiest shipping lanes. About 13% of global trade flows through the canal, representing 30% of international container traffic. Each year, more than $1 trillion worth of goods pass through the canal.

According to the latest data published by Egypt's Central Bank, in 2021, Egypt earned $88.3 billion in foreign exchange from five sources: the Suez Canal, remittances from Egyptian workers abroad, exports, tourism and foreign direct investment. The waterway generated $6.4 billion, which is 7.1% of the total revenue.

As a result of Russia's invasion of Ukraine, foreign investors pulled billions of dollars out of Egypt this year, prompting Cairo to devalue its currency by almost 17% on March 21. The war has also negatively affected Egypt's tourism industry and pushed Cairo to turn to India for wheat after relying solely on Russian and Ukrainian wheat for years.

In an interview with state TV on May 3, Rabie said, "At the beginning of the Russian-Ukraine crisis, I said both positive and negative effects could be expected. But we didn't know which would outweigh the other. In the case of the Suez Canal, the positive impact outweighed the negative.”

“We don't wish crises or wars between countries, but we say as a consequence of a crisis, this is the result for us,” he added.

The rise in Suez Canal revenues coincides with the proposal of the European Union to ban oil imports from Russia and refinery products as part of yet another round of sanctions against Moscow for its invasion of Ukraine. However, relying on the Gulf as a replacement for Russian oil and gas is "overstated" as "alternatives in the global energy market are very limited," Hussein Solaiman, deputy head of the Economy Department at the Al-Ahram Center for Strategic Studies, told Al-Monitor.

Solaiman noted that to increase Gulf production, long-term energy investments are needed. “Looking closely at the production and surplus data for all the countries, they cannot be compared to the Russian gas and oil exports. As a result, an increase in oil traffic through the Suez Canal is only expected to happen to a limited extent, and we may have already seen this happen during the first quarter of this year," he said.

Saudi Arabia accounts for 11% of the world's oil production, equal to Russia, followed by Kuwait and the United Arab Emirates with 4% each, according to the US Energy Information Administration.

Solaiman said that after the limited increase in Suez Canal revenues brought on by the war in Ukraine and the energy shift, there would be a decline as the world enters a state of stagflation characterized by high prices and low growth. “Demand for industrial exports, including those from the world's largest exporters, Germany, China and Japan, has already begun to decline. … We expect to see a decrease in trade movement and the flow of goods within the Suez Canal,” he added.