The Takeaway: Russia-Ukraine war spills over into Nile Dam dispute 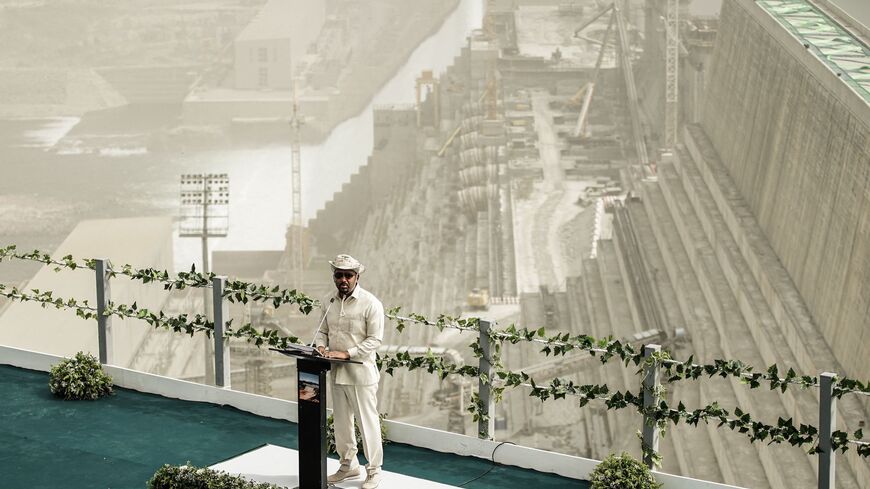 Sharp increases in food and energy prices resulting from the Russia-Ukraine war have added urgency and concern in Egypt about Ethiopia’s plans to proceed with the third filling of the Grand Ethiopian Renaissance Dam (GERD) in June.

The stakes: Ethiopia considers the hydroelectric power potential of the GERD a potential game-changer for the country and the region. With the dam, Ethiopia could become a major energy exporter. Egypt depends on the Nile for over 90% of its water resources and fears the GERD could limit water flows. Sudan, which is allied with Egypt in the dispute, worries that the dam would accelerate flooding of its territory, which happens regularly during rainy seasons.

Stalled diplomacy: Progress on a diplomatic agreement among Egypt, Ethiopia and Sudan remains stalled, despite the best efforts of the United States, the United Arab Emirates, the African Union and others to broker a compromise among the parties. In the last two years, Egypt has taken its case to the UN Security Council, claiming the GERD is a security dispute. The permanent members of the council have heard Egypt’s case and backed further diplomacy but not a resolution.

Elusive common ground: Cairo wants an internationally brokered binding agreement, with no sunset and clear arbitration channels, that assures the required flow of water to Egypt. Ethiopia is wary of binding commitments and open-ended arbitration. Ahmed Gomaa has more here on the recent hurdles to diplomatic progress.

Water and war: The parties to the Nile dam dispute are connected by war as well as water. Ethiopia’s Prime Minister Abiy Ahmed, who won the Nobel Peace Prize in 2019 for making peace with Eritrea, has been battling an insurgency in Tigray. Ethiopian and Eritrean troops and proxies have been accused of war crimes in the conflict, which has led to refugees into Sudan as well as skirmishes with Sudanese forces. Egypt has deepened its security ties with Sudan, a kind of leverage and pressure on Ethiopia.

Sudan’s perilous transition: Sudan’s fragile democratic transition was upended by a military coup in October 2021, leading the United States and international lending agencies to suspend assistance. Sudan’s economic crisis is now compounded by the disruptions of the Russia-Ukraine war.

Thinking ahead: The third filling of the dam is expected to be lower than the previous two; if so, then Egypt may have little to fear, at least for now, with regard to water flow. But the economic impact of the Russia-Ukraine war will only get worse for Egypt, Ethiopia and Sudan, so the GERD will take on even greater urgency for different reasons for all three parties. Nonetheless, expect Cairo to press ahead for a binding agreement and perhaps another run at the Security Council. Meanwhile, Egypt is also accelerating plans for water management, as Ayah Aman reports from Cairo, while giving priority to advancing climate initiatives and technologies in advance of its hosting of the Conference of the Parties (COP 27) at the UN Climate Change Conference in Sharm el-Sheikh Nov. 7-18.

In a highly unusual disclosure, Israel’s Mossad spy agency revealed that it foiled an alleged Iranian plot to assassinate a journalist in France, an Israeli diplomat in Turkey and a US general stationed in Germany.

The news comes as the Biden administration weighs Tehran’s demand that Washington remove the Islamic Revolutionary Guard Corps’ terror designation as a condition of re-entering the so-called Iran nuclear agreement.

Al-Monitor has learned that Israel conveyed to European intelligence services detailed information about the IRGC's alleged assassination plots. Ben Caspit reports that the sharing of such intelligence is one part of Israel’s “global diplomatic campaign against the nuclear agreement and Iran in general.”

Hamas is enjoying a boost in popular support as evidenced by the scores of Palestinian protesters who waved Hamas flags and chanted its slogans during a mass demonstration near Jerusalem’s Al-Aqsa Mosque last month.

The anticipation of a military confrontation between the Gaza-based militant group and Israel has also “pushed the international community to focus its attention on the Palestinian cause in an attempt to prevent a wider confrontation,” writes Ahmad Melhem.

In recent weeks, the leadership of both Hamas and Islamic Jihad made and received dozens of calls from Arab, international and regional parties seeking to de-escalate the situation.

Iraqi security forces have seized massive quantities of the popular amphetamine known as Captagon near the country’s western border with Syria. On April 30, authorities confiscated more than 6 million pills from a warehouse and made multiple arrests.

Shelly Kittleson writes that such drug smuggling tends to occur in parts of Iraq with little government oversight or with significant levels of corruption.

The drug busts come as Iraq mounts an anti-terrorism operation involving Iran-linked forces and the US-led coalition. Islamic State (IS) fighters wearing military uniforms are increasingly setting up fake checkpoints in a tactic reminiscent of al-Qaeda at its height.

Yazidis are alarmed by a concrete border wall that Iraq is building along its Syrian border, ostensibly to keep out IS fighters. The wall has evoked a sense of besiegement among Yazidis more than seven years after IS waged a genocidal campaign on their ancient religious community in Sinjar.

Fehim Tastekin examines whether the wall’s construction, as well as the Iraqi army’s recent escalation in Sinjar, are linked to Turkey’s cross-border operation against the outlawed Kurdistan Workers Party (PKK) in Iraq. “Disabling such border crossings is a strategic priority for Turkey in its efforts to cut the connections between PKK-linked groups in Syria and Iraq,” he writes.

A migrant boat’s capsizing off the northern coast of Lebanon has added to public frustration in Tripoli with government ineptitude. Residents of the impoverished Lebanese city have blocked roads and staged sit-ins to protest the government’s delay in recovering the migrants’ bodies.

“We want our loved ones — dead or alive. We want a grave to cry over,” a relative of one of the missing asylum-seekers told Hanan Hamdan.

The boat disaster, which left at least six people dead, comes as Lebanon battles its worst economic and financial crisis in decades. As summer approaches, the country has observed an uptick in Lebanese migrants attempting to flee by sea.

Listen: Ben Caspit speaks this week to Israeli Defense Minister Benny Gantz about Iran’s nuclear program, the future of the Gaza Strip, Jerusalem’s flashpoint holy sites and how the war in Ukraine could impact Israel’s air campaign against Iranian targets in Syria.

Watch: On the latest episode of “Reading the Middle East with Gilles Kepel,” Turkey’s first Nobel laureate, Orhan Pamuk, talks about his new novel that delves into the psychology of a pandemic.

Listen: Andrew Parasiliti and Semafor’s Steve Clemons discuss the challenges of managing US-Saudi ties and the barriers to re-entering the nuclear agreement with Iran.