Road plan could bring demolitions to Cairo's City of the Dead

Cairo's City of the Dead may be in for a new series of demolitions because of a new road plan, but the plan is uniting heritage defenders in opposition. 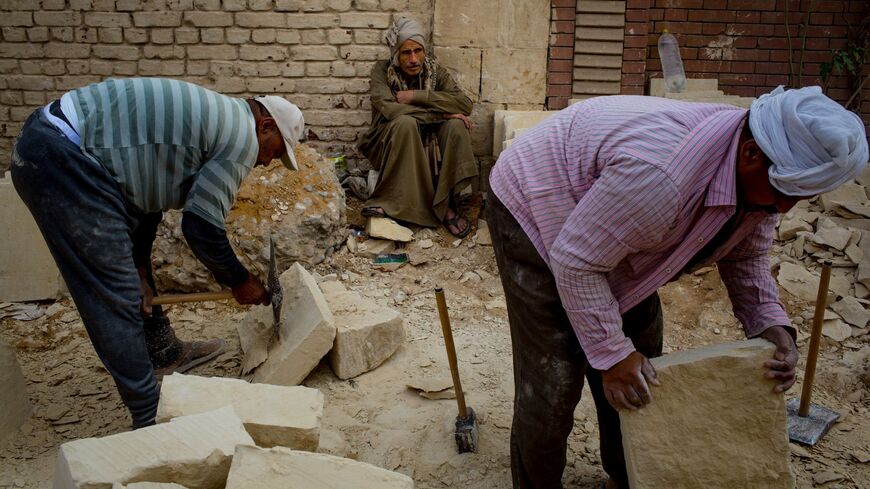 A man takes a break from making headstones in the poor neighborhood of the City of the Dead on Dec. 14, 2016 in Cairo, Egypt. The City of the Dead houses more than half a million people living inside the graveyard. - Chris McGrath/Getty Images

CAIRO – Local historians and heritage specialists are concerned about Cairo authorities' plan to demolish several ancient tombs to clear the way for a new road.

The new road will be named after Yasser Rezk, a renowned journalist who passed away in January of this year. It will be 7 kilometers long, contain five traffic lanes and cut across the City of the Dead, a sprawling cemetery in southern Cairo, on the road to residential areas further south in the Egyptian capital.

However, historians accuse the authorities of trying to pave over an important part of Egypt's history.

The plan also concerns the relatives of the people buried in the tombs, including Taha Hussein, who was dubbed the dean of Arabic literature. Hussein, who died in 1973, is most known for his autobiography, "The Days." His book "On Pre-Islamic Poetry," which came out in 1926, landed him in trouble for containing some critical comments about early Arabic poetry and the Quran, the holy book of Muslims.

His granddaughter said his family had not been officially notified by the authorities about the possible demolition of the tomb. "However, when we visited the tomb, we found an 'X' sign drawn on its walls in red," Maha Aoun said. She told a local television channel earlier this month that Hussein's family members had tried to get clarification, but to no avail.

Hussein's daughter, Amina, and his son-in-law, Mohamed Hassan al-Zayati, Egypt's foreign minister in the early 1970s, are buried in the same tomb.

Cairo Governorate officials denied, meanwhile, reports about the potential demolition of the tomb. "We have not received any notices about the exact location of the new road," Ibrahim Awad, official spokesman for Cairo Governorate, told Al-Monitor. He said the Engineering Authority of the Armed Forces, which oversees construction projects across Egypt, is the body responsible for the  new road.

Covering around 12 square kilometers and lying near Fatimid Cairo, al-Azhar mosque, al-Hussein Mosque and the Bazaar, the City of the Dead contains tens of thousands of tombs of some of the most important figures in Egypt's Islamic history. It sprouted over 1,000 years ago and evolved into a fully-fledged cemetery where tombs are pieces of art, rather than burial sites, over the centuries. Some of its tombs contain rare Islamic decorations and coatings made of exquisite marble.

"The City of the Dead tells of important phases in the history of our country, being home to the remains of a large number of important figures," Mukhtar al-Kasbani, professor of Islamic history at Cairo University, told al-Monitor. "Some of the tombs registered as antiquities in it have to be protected by state authorities."

Each of the dynasties that ruled Egypt over the past millennium left its mark on the City of the Dead, adding to it its own tombs with construction styles that are different from those before it.

But Cairo's runaway population growth has also left its mark on the city, with some homeless and poor Egyptians seeking housing in the cemetery.

Egyptian President Abdel Fattah al-Sisi is establishing thousands of kilometers of roads, building dozens of flyovers and bridges, modernizing railways, constructing water treatment and desalination plants and establishing electricity stations, spending trillions of Egyptian pounds on them. The projects are improving Egypt's ranking in international road safety indices, opening the door for electricity production surpluses and easing water supply in a country that desperately needs it.

However, some of the development projects have caused heritage loss. Ancient quarters were destroyed, historical palaces brought down and historical buildings razed.

Some tombs were already destroyed in the City of the Dead, also registered as part of Historic Cairo and a UNESCO heritage site, a year and a half ago to clear the way for another road.

Instead of demolishing the cemetery, history specialists say, it should be turned into a tourist site.

"This area needs to be placed on the national tourist map," Magid al-Rahib, the head of the Society for the Protection of Egyptian Heritage, told Al-Monitor. The city gives insights into the burial traditions of Egypt's different historical periods, especially since the Islamic conquest of 641 AD, he said, and "We have enough land everywhere else."

Nonetheless, with its population growing, the Egyptian capital has to make some tough choices, urban planning experts say.

Cairo's population exceeds 20 million. Millions more travel there every day to work, to get official documents from government offices or receive medical treatment.

"Cairo has to decide its own priorities, especially with its population growing steadily," Mohamed Ibrahim Gabr, professor of urban planning at Ain Shams University, told Al-Monitor. "Historical sites are badly in need of protection, but this should not deny the authorities the right to develop the city and solve its problems."