A further increase in already skyrocketing home prices appears inevitable in Turkey following Erdogan’s announcement of loan incentives, a move that many pundits see as pouring fuel on the inflation fire. 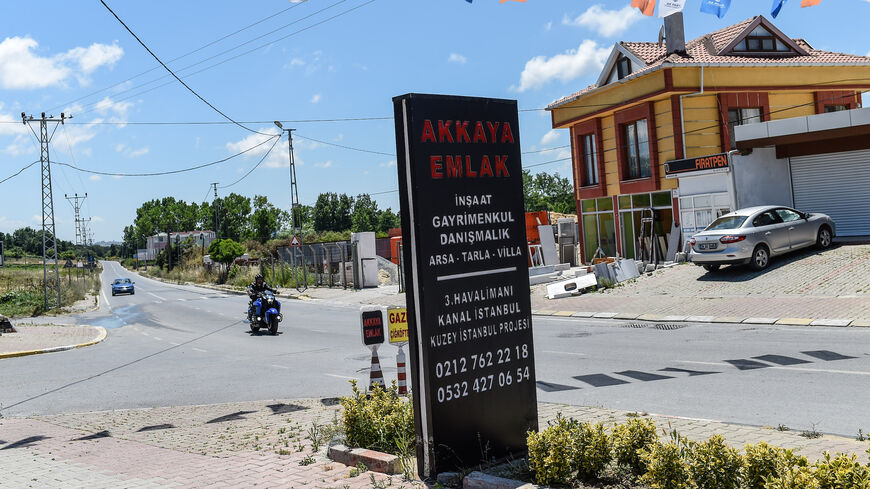 A real estate advertisement offers apartments and houses with a view of the canal, in the small coastal village of Karaburun, near Istanbul, on June 12, 2018. - YASIN AKGUL/AFP via Getty Images

A loan package to encourage home sales announced by President Recep Tayyip Erdogan last week threatens to further stoke Turkey’s consumer inflation, which is already on course to hit an annual of 100% in the coming months.

Erdogan’s government has failed to outline a convincing program to curb inflation, relying instead on impetuous measures to stimulate growth as a means of soothing popular economic grievances ahead of elections next year. Housing and construction have been Erdogan’s favorite sectors, driving economic growth for years before hitting dire straits amid the country’s financial woes in the past several years.

On May 9, Erdogan unveiled a package of relatively cheap loans to encourage home purchases and prop up ailing construction companies. Yet the low- and middle-income masses had little to cheer for as the terms of the scheme make the loans affordable only to deep-pocketed buyers — not to mention the immediate spike in already skyrocketing home prices after the announcement of the package.

The government’s move comes at a time when the embattled Turkish lira has tumbled anew, fostering fresh inflationary pressures. Turkey’s annual consumer inflation hit 70% in April and is expected to soar further in the coming months. Should price increases continue at the same pace, annual inflation is likely to reach 100% in July. The government has virtually surrendered to inflation by discarding the central bank’s interest-rate tool as a means of reigning in prices. The bank has kept its policy rate at 14% since December after cutting it by 500 basis points over four months, heeding pressure from Erdogan who insists on the unorthodox view that high-interest rates cause high inflation.

The construction sector contributed up to 8.5% to Turkey’s gross domestic product in its heyday under Erdogan, but its share has dropped sharply since 2017, shrinking to 5% in 2021. Many investments have stalled amid soaring construction costs as a result of the lira’s depreciation, and public projects hit by inflation have lost much of their appeal to contractors, leading to growing grumbles in the sector.

In a bid to cheer some companies up, Erdogan’s package allocated a loan facility of 20 billion liras (nearly $1.3 billion) for builders who have completed at least 40% of a housing project and have yet to sell at least 50% of the homes. The three-year loans will be issued by public banks with a monthly interest of 0.89% — a very generous rate given that monthly inflation topped 7% in April.

In the second leg of the package, public banks offer loans to first-time homebuyers who purchase firsthand homes of up to 2 million liras ($128,000), with a maturity of 10 years and a monthly interest of 0.99%. The loans in this category are expected to boost the demand for new homes in provincial areas rather than big cities.

The third leg aims to entice those who have put their savings in hard currency or gold into converting their assets to liras. Accordingly, buyers of homes worth up to 2 million liras who meet at least half of the price by converting hard currency or gold placed in bank accounts prior to April 1 are eligible for loans with a maturity of up to 10 years and a monthly interest of 0.89%.

In sum, easing the troubles of construction companies, sustaining housing investments and stimulating the demand for homes is what matters for Erdogan, with seemingly no consideration of the move’s impact on home prices and inflation in general.

As of February, home prices in Turkey were up 96% from a year ago, with the spike topping 106% in Istanbul, the country’s biggest city, according to central bank data. For comparison, the rates stood respectively at 14% and 10% in February 2020. The staggering uptick has been driven both by a shrinking supply in the housing market and a buying spree among the well-to-do who have come to invest in homes to shield their savings from the tumbling lira and inflation.

In another move expected to inflate home prices, Ankara has raised the threshold in a citizenship-for-property scheme for foreign buyers. Foreigners are now promised Turkish citizenship in return for buying properties worth at least $400,000, as opposed to $250,000 until recently. Nearly 20,000 foreigners acquired Turkish citizenship under the scheme from 2018 to 2021, according to the Environment and Urbanization Ministry.

With the increase in home prices outpacing consumer inflation by some 30 percentage points, the housing sector appears headed for chaos. The price increases are unlikely to ease amid a supply shortage caused by the stalling of investments due to soaring costs. Official data show that the construction cost of buildings rose 98% over a year in March, while the prices of construction materials increased 124% — a major factor deterring both new investments and the completion of existing ones.

According to Erdal Eren, head of the Contractors Union of Turkey, the country’s demographics require the construction of at least 850,000 new homes per year, but the number has fallen to about 450,000 in the past several years. As a result, a robust demand has been pushing prices up at a whopping pace.

Erdogan’s incentive package is bound to further stimulate demand and push prices even higher. Many pundits agree that his move amounts to pouring fuel on the inflation fire. And with rent prices trailing the uptick in home prices, affording accommodation is becoming all the more difficult for millions of families overwhelmed by inflation.