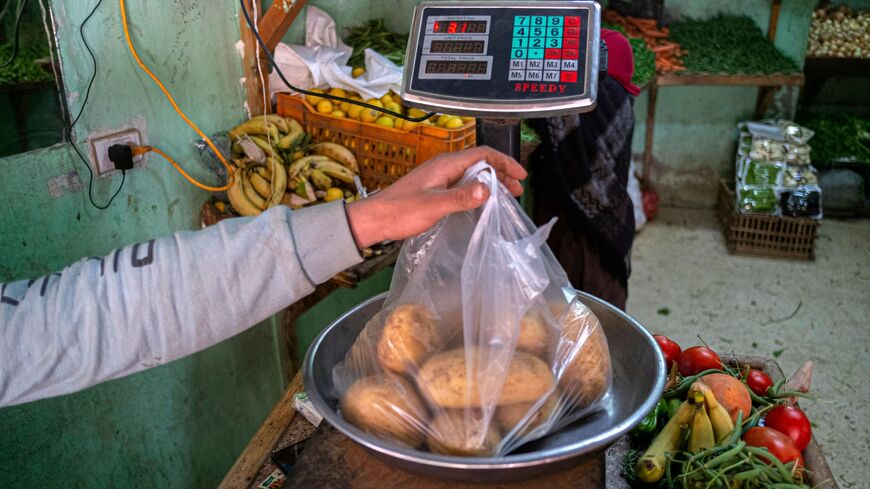 An Egyptian man weighs potatoes in a market in Cairo, on March 17, 2022. Soaring bread prices sparked by Russia's invasion of Ukraine have bitten into the purchasing power of consumers in Egypt. - KHALED DESOUKI/AFP via Getty Images

Islam Salama, the lawyer for the three men known as the “Zorafaa el-Ghalaba” (Poor People’s Funny Band), told Al-Manassa website on April 28 that his clients were charged with spreading false news after they published satirical clips about the high food prices. The prosecution ordered their imprisonment for 15 days pending investigations, and they were transferred to Abu Zaabal prison in Cairo, he added.

Salama said his clients denied the accusation and “they confirmed that the channel only aimed to make profits through views, and that they had nothing to do with politics.”

The Zorafaa el-Ghalaba band consists of three men from the Assiut governorate of Upper Egypt who work as real estate guards. They  have published satirical videos on their TikTok channel since 2020, which is followed by about 125,000 people.

According to a report by the Daraj website, “The band did not publish any political content criticizing the state, with the exception of the two highly popular videos on soaring prices that were widely circulated on social media platforms, and received millions of views.”

Constitutional law professor Mohamed Reda el-Nimr told Daraj that the trials of Zorafaa el-Ghalaba will be held in accordance with Article 86 of Egypt's 2014 constitution, which states that “the preservation of national security is a duty," and that upholding it is a national responsibility.

The arrest comes as prices of consumer goods in Egypt are soaring. According to the Central Agency for Public Mobilization and Statistics (CAPMAS), Egypt’s annual consumer price inflation was 12.1% in March 2022, compared to 2.4% in March 2021. The increase was driven by a rise of more than 23% of food and beverage prices, most notably vegetables, oils and grains.

Prices also climbed in the wake of the Central Bank of Egypt’s decision to devalue the local currency. The Egyptian pound lost about 17% of its value against the dollar on March 21.

Observers believe that authorities are afraid of social unrest or protests triggered by the deteriorating economic conditions and the rise in prices, which are expected to continue. They believe this is why the Egyptian security forces arrested Zorafaa el-Ghalaba after the spread of their satirical videos on high prices.

Their arrest came in tandem with Egyptian President Abdel Fattah al-Sisi’s announcement on April 26 of a comprehensive national dialogue with all political and opposition forces.

On April 25, the Egyptian Public Prosecution released a group of political activists held in pre-trial detention. Sisi expressed his happiness over their release during his speech at the Egyptian Family Iftar banquet on April 26, saying, “The nation [Egypt] accommodates all, and differences of opinion do not spoil the nation's cause.”

Moreover, Sisi announced the reactivation of the Presidential Pardon Committee tasked with reviewing amnesty requests for prisoners and detainees accused of political crimes, which he had launched in 2017. The committee includes some members affiliated with the Egyptian opposition.

In its first meeting after its reactivation on May 2, the committee announced the release of another batch of detained activists within a few days.

But Hassan Nafaa, professor of political science at Cairo University, said the arrest of Zorafaa el-Ghalaba reflects the ruling authorities' determination to get rid of opposition voices. He told Al-Monitor, “The state must release all prisoners of conscience in order to prove its goodwill and the seriousness of the national dialogue it is launching with the opposition.”

The arrest of the band members "contradicts the idea of a comprehensive national dialogue,” he said. "The state ought to resort to political solutions rather than security solutions.”