Although Ankara has secured several diplomatic strides by normalizing its relations with Saudi Arabia and the United Arab Emirates, rapprochement with Egypt still seems a challenging prospect. 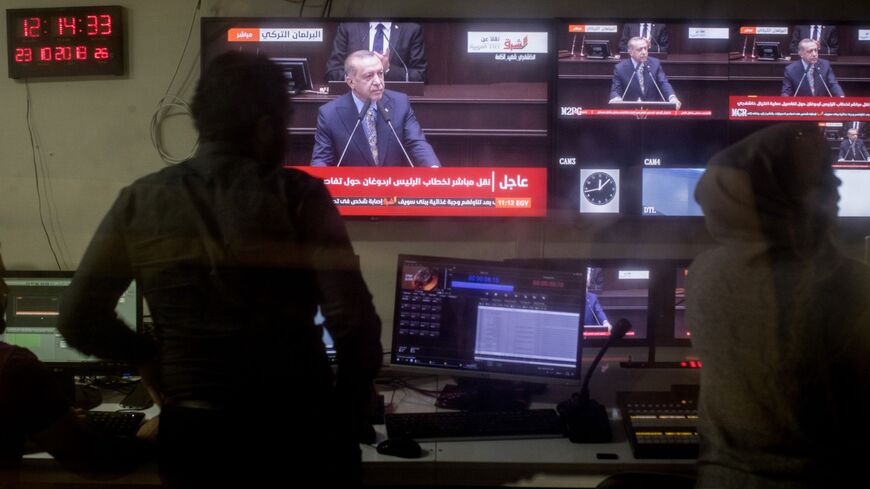 Staff of El Sharq TV broadcast Turkish President Recep Tayyip Erdogan speaking about the murder of Saudi journalist Jamal Khashoggi at the TV stations headquarters on Oct. 23, 2018 in Istanbul, Turkey. Egyptian broadcaster El Sharq TV has been based in Turkey for more than four years and employees more than 45 people of varying nationalities. Over the years Turkey has become a hotspot for Arab journalists and broadcasters and now hosts more than 15 TV channels run by independent or opponent media to various governments. - Chris McGrath/Getty Images

Turkey’s efforts to turn a fresh leaf with its former Arab rivals have so far been fraught with U-turns and unilateral concessions from Ankara. Despite the recent thaws with Saudi Arabia and the United Arab Emirates, Egypt seems to be hesitant, and it remains unclear how much President Recep Tayyip Erdogan's April 28 visit to Saudi Arabia help normalize relations with Cairo.

Saudi Arabia and Egypt have been two major Arab countries that were disgruntled by Ankara’s intrusive policies vis-a-vis the Arab world. Ankara’s strong support of the Muslim Brotherhood in the wake of the Arab Spring, its military and political alliance with Qatar and neo-Ottoman ambitions have been among the major contention points. Ankara’s latest diplomatic push to mend ties with Arab countries seems to be fueled by Turkey’s economic problems as Erdogan tries to improve his country’s economic outlook ahead of the 2023 presidential elections.

The visit showed how the tables have turned against Erdogan, who once sought to make the crown prince pay the price for the assassination. Erdogan was greeted by the Jeddah governor at an airport on his arrival and sent off by deputy governor on his departure. Saudi media reports stressing that the visit request came from Ankara instead of Riyadh marred Erdogan’s image further. During his trip, Erdogan said he visited the country upon the Saudi King's invitation.

The talks between Erdogan and the Crown Prince have yet to bear any concrete results, and Turkish public opinion seems to be focusing on what Ankara has given rather than what it has gained.

According to Saudi Arabia's former chief of Intelligence Turki bin Faisal Al Saud, whose maternal grandmother was a Turk of ethnic Circassian descent, the rapprochement shows that Erdogan has acknowledged Ankara's anti-Saudi policies didn’t do anyone, particularly Turkey, any good.

Tellingly, during Erdogan’s visit to Jeddah, Mekamelin TV, a Muslim Brotherhood-affiliated TV channel based in Istanbul, announced that it ceased its operations in Turkey and that it was transferring its headquarters to another country.

The announcement came almost a year after Brotherhood-affiliated TV channels based in Turkey were asked to stop criticizing Egypt President Abdel Fattah el-Sisi, and several programs by journalists critical of Sisi were suspended.

Media reports also suggest that Ankara has been forcing some high-level Muslim Brotherhood figures to leave Turkey, by not extending their residence permits. A prominent Muslim Brotherhood activist, Yasser Al Umda, announced in April that the Turkish authorities asked him to leave Turkey after his video message calling on the Egyptian people to take to the streets against the Sisi administration. Yet, Ankara’s current position hardly allows it to show the door to the all Muslim Brotherhood members. Hence its goodwill gestures have remained confined to smaller steps.

Turkey’s Foreign Minister Mevlut Cavusoglu announced in April that he and his Egyptian counterpart Shoukry would break fast together in Istanbul, only to back down from his announcement later on. “Currently there is no scheduled meeting, or at least no date has been set for a meeting.” Cavusoglu said. “If a mutual will towards fully normalizing our relations emerges, then it could be possible to reinstate ambassadors mutually again." Diplomatic relations between Turkey and Egypt were downgraded to the level of charge d'affaires in 2013. For the first time since the downgrade, Ankara appointed an ambassador to fill the charge d'affaires position in Cairo, which is seen as another olive branch.