Gulf Cooperation Council reconciliation may have set in motion Ankara’s desire for a reset with Cairo. 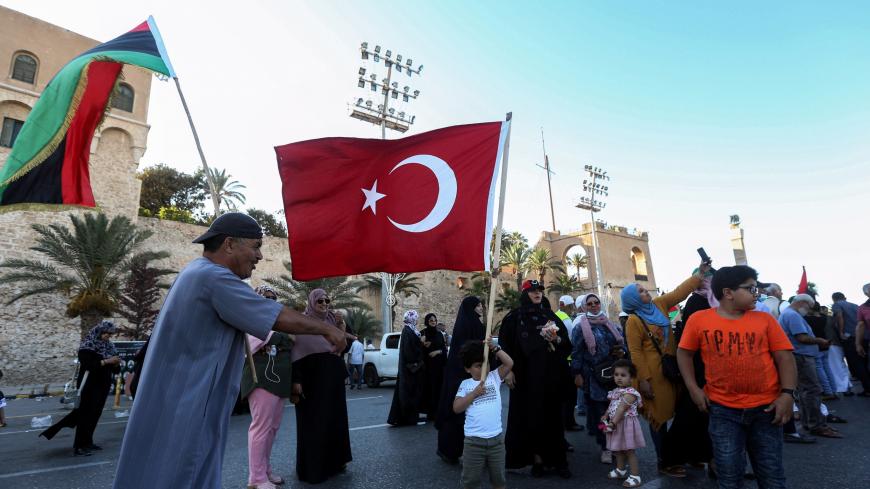 People wave flags of Libya (L) and Turkey (R) during a demonstration in Martyrs' Square in the Libyan capital, Tripoli, held by the UN-recognized Government of National Accord, on June 21, 2020, after the Turkish-backed government denounced Egypt's warning of possible military intervention. Turkey is now hoping for some sort of reconciliation with Egypt when it comes to maritime boundaries and gas rights in the eastern Mediterranean. - MAHMUD TURKIA/AFP via Getty Images

Erdogan: Seven years of iciness give way to diplomacy

That’s a shift, coming after a seven-year freeze in relations that started after Turkey's backing of former Egyptian President Mohammed Morsi, who was elected in 2012 and affiliated with the Muslim Brotherhood.

Morsi was deposed in 2013, following uprisings and a military coup that led to Abdel Fattah al-Sisi becoming president in 2014.

Ties with Turkey thereafter went into the deep freeze.

Erdogan said the warming trend is not yet "at the highest level but it is just a notch under," meaning that he and Sisi haven’t yet sealed the deal.

A change in Egypt-Turkey relations would have a huge impact on the region, where political and diplomatic ties are deeply intertwined.

The decision in January by Egypt, the United Arab Emirates, Saudi Arabia and Bahrain to bury the hatchet with Qatar, a reconciliation facilitated by the United States and Kuwait, forced a rethink in Ankara’s regional strategy, including with Saudi Arabia, where the bad blood has been on high boil.

The murder of journalist Jamal Khashoggi took place in Istanbul, and Erdogan’s government enjoyed putting Crown Prince Mohammed bin Salman and the kingdom on the spot.

Erdogan and King Salman bin Abdul-Aziz Al Saud had a rare telephone chat in November 2020 during the G-20 virtual summit, in which they discussed "keeping channels of dialogue open in order for the bilateral relations to be enhanced and for issues to be settled," according to an official Turkish readout.

After the recent release of the US intelligence report placing responsibility for the killing on the crown prince, "Turkey — a strong critic of the royal — has remained silent" rather than piling on, Amberin Zaman wrote.

Erdogan’s statement Friday was uncharacteristically muted, seemingly plaintive, on the kingdom. "Let me add one more thing," he said. "Saudi Arabia’s joint exercise with Greece has saddened us. We would not want to see Saudi Arabia make such a decision. Surely we will discuss it with the Saudi authorities. We think it should not have happened and should not be like this."

Erdogan’s top short-term priority is to draw Egypt to its side in an ongoing dispute with Greece regarding demarcation of eastern Mediterranean maritime boundaries, including sovereignty over valuable gas reserves, and there is no sign yet of that happening.

Fehim Tastekin describes overlapping arrangements between Egypt, Greece and Cyprus on one side and Turkey and Libya on the other that have boxed in Ankara and Cairo, at least for the time being.

Erdogan, of course, provided his own cultural analysis of why Egypt should tilt toward Turkey, rather than Greece. “Surely you cannot place the Egyptian people together with the Greek people,’ he said. ‘We can never believe that the Greek people and the Egyptian people would be identical. Therefore, we would like to see them at their proper place."

On the other side of the Mediterranean, a warming in Egypt-Turkey ties could pay dividends for Libya. Egypt had been a backer of Libyan National Army commander Khalifa Hifter; Turkey has sent jihadis from Syria to fight for the Libyan government.

As we explained here last month, Egypt and most outside parties got on board with the October 2020 cease-fire, which allowed a political process to take hold and gain traction, leading to the vote this week by the Libyan House of Representatives endorsing the interim government proposed by Prime Minister-designate Abdul Hamid Dbeibah.

The agenda for the new government is daunting, including unification of government institutions split by nearly a decade of civil war, and elections in December. Libya doesn’t have a chance if the outside powers that backed the warring parties stir up the military conflict again. A statement by the United States, the United Kingdom, France, Germany and Italy also called for "the withdrawal of all foreign fighters and mercenaries," a message to Russia and Turkey.

Contest for influence in Africa

Turkey has also challenged Egyptian influence in parts of Africa, but it has been an uphill battle, and sometimes overblown in the regional press, as Tastekin explains.

Turkey had good relations with Sudanese President Omar al-Bashir, a war crimes suspect who was ousted in 2019. Bashir, like Erdogan, had an affinity for the Brotherhood and poor relations with Egypt.

Elsewhere, Egypt and Turkey have picked up their diplomatic outreach in Guinea-Bisseau, as we report here, as well as Senegal, as Khalid Hassan reports, Ghana, as George Mikhail reports, and Somalia, as Muhammed Magdy and Tastekin report.

"Turkey’s military presence in Libya, Ankara’s support of the Muslim Brotherhood (which Cairo designated a terrorist organization) and Erdogan’s anti-Sisi posture still remain as major barriers to the improvement of ties," writes Tastekin. "Although Erdogan has scaled down his angry outbursts against the Egyptian leader, the Turkish president still salutes his supporters with a Rabia sign marking the resistance of Muslim Brotherhood members."