The Turkish president wants a change in relations, but his efforts are seen as the result of a failed regional strategy and poor ties with the Biden administration. 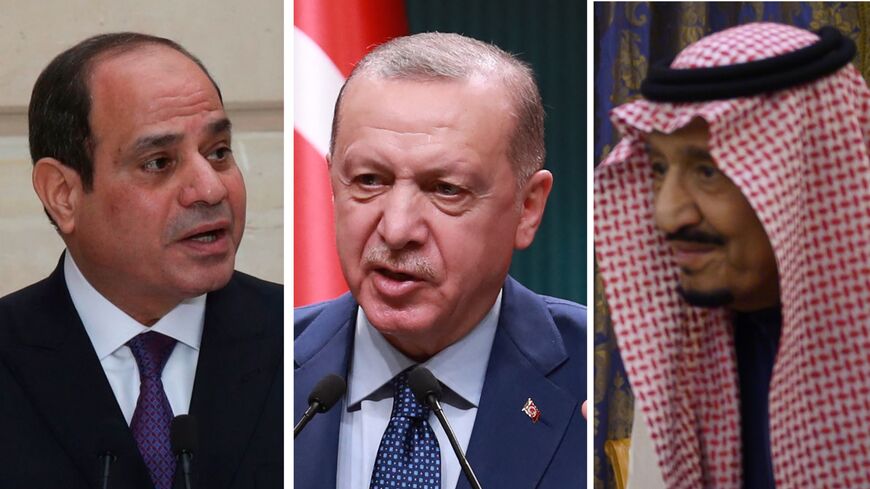 Turkish President Recep Tayyip Erdogan wants to bury the hatchet with Saudi Arabia and Egypt, but it won’t be easy.

They assess Erdogan’s moves are the result of a failed and weak hand, including poor relations with the Biden administration.

In Egypt, it’s about Libya and the Brotherhood

For Erdogan, the problems began when Saudi Arabia and the UAE backed the coup that overthrew Egyptian President Mohammed Morsi in 2013. Morsi’s rise after the fall of longtime Egyptian president Hosni Mubarak was a sign that the Muslim Brotherhood was ascendant.

Erdogan considers himself a champion of the movement, which has adherents across the region. The Brotherhood blends religion and politics in a way that the Gulf states consider a threat. Prior to Morsi’s departure, Turkey, Egypt, Qatar and Sudan (at the time) aligned with the group, and Turkish-based Islamists in Syria were taking the fight to Syrian President Bashar al-Assad via the jihadi highway from Turkey, as Kadri Gursel wrote in 2014.

So when Riyadh and Abu Dhabi backed the coup that replaced Morsi with Sisi, it was game on for Erdogan.

Eight years later, and facing a quagmire in the Syrian civil war on Turkey’s border and rocky relations with its NATO allies in the United States and Europe, Erdogan is looking to cut down on friction in the region.

Egypt is too big, economically and politically, and the stakes too high, to not try to mend relations.

Meetings this week at the deputy minister level in Cairo were described by the Turkish Foreign Ministry as "frank and in-depth." At the top of the agenda are energy resources in the eastern Mediterranean, Libya, and, of course, the Muslim Brothers.

Turkey sees itself on the short end of securing what it considers its rightful maritime demarcation and energy access in the eastern Mediterranean. The East Mediterranean Gas Forum is based on Cairo. Greece, Cyprus and Israel all are basically aligned with Egypt. But Turkey claims that  "Egypt’s maritime zone in the eastern Mediterranean would have been 11,500 square kilometers (4,440 square miles) larger had it struck a delimitation deal with Turkey rather than the Greek Cypriots," Fehim Tastekin writes. Erdogan knows Turkey’s interests will require an eventual eye to eye with Sisi.

Second, there is a potential for a meeting of the minds on Libya. That could bode well for beleaguered Libya. Turkey backed the UN-recognized Libyan government in the civil war, including by shuttling foreign fighters (including jihadis) from Syria. The Libyan Government of National Unity has an Islamist tilt. There is now a UN-brokered peace process and a path to elections. Egypt has more or less stepped back from its support from the insurrectionist Khalifa Hifter and thrown in with the UN process. Russia and the UAE have also backed Hifter.

The path to Libyan elections is fragile. The UN wants foreign fighters out, especially those backed by Turkey (in support of the Government of National Unity), and Russia (in support of Hifter). Neither side, however, is in a rush to give up these assets. Murat Mercan, Turkey’s ambassador to the United States, said in an Al-Monitor podcast last month that while Turkey supports the UN process, stability and security are fragile — implying that it isn’t quite ready to send its proxies home.

Third are the Egyptian Muslim Brothers who agitate from exile in Turkey. Sisi wants them expelled from Turkey and their media operations shut down. Erdogan wants a "midway formula" that would not require their expulsion, explains Tastekin. "As part of overtures to Cairo in March, Ankara pushed the Brotherhood’s Istanbul-based TV channels to terminate several political programs, but the shows reappeared online several weeks later, a development that Cairo has certainly noted."

The rift between Riyadh and Ankara is deeper, and Erdogan is working harder to make amends.

Turkish Foreign Minister Mevlut Cavusoglu is planning to visit Saudi Arabia on May 11, according to Bloomberg, the first such visit in three years, following a call between Erdogan and King Salman earlier this week.

Relations crashed when the UAE, Saudi Arabia, Egypt and Bahrain imposed a trade and travel embargo on Qatar in 2017. Turkey quickly sent troops in support of its ally and established a military base in Qatar.

The next year, it got really personal, when Saudi journalist and dissident Jamal Khashoggi was murdered at the Saudi Consulate in Istanbul. Turkey had the audio tapes of the brutal murder, and brandished its leverage over Saudi Crown Prince Mohammed bin Salman, known as MBS, who was accused of masterminding the murder. Saudi Arabia imposed a trade embargo on Turkey in response.

While Erdogan felt for a time he had the edge on MBS, events forced a rethink. The trade embargo hurt Turkey’s faltering economy. The United States and Kuwait brokered a reconciliation in the Gulf. And the release of the US intelligence report on MBS’ role in the Khashoggi killing left the crown prince standing. "Israel’s establishment of diplomatic ties with a string of Gulf states and Morocco has also spooked Ankara," writes Zaman.

Erdogan had hoped that a channel to the Saudi king would be the key to smooth relations, but Erdogan knew he had to do something to clear the air on the MBS-Khashoggi matter.

On April 25, Ibrahim Kalin, Erdogan’s spokesperson, offered just such a gesture, saying, "They had a court. Trials have been held. They made a decision, so we respect that decision," referring to the Saudi sentencing of eight people to jail terms for the murder. "We will seek ways to repair the relationship with a more positive agenda with Saudi Arabia as well [as with Egypt]," Kalin continued, adding that that he hoped the kingdom would lift the boycott on Turkish goods.

A pleasant call with the king, however, didn’t prevent the kingdom from shutting down several Turkish-run schools in the country this week.

"The Turkish military base in Qatar, ongoing Turkish support for the Brotherhood, Turkish military presence in Somalia, Libya, Syria and Iraq, the media war between the two countries, and strengthening ties between Turkey and Pakistan are among major sources of disgruntlement on the Saudi side, which seems to be expecting some concrete changes over these issues before setting aside the conditions," writes Tastekin.

An empty hand in Washington

Semih Idiz wrote here in March, "Nothing represents the collapse of Erdogan’s Islamist foreign policy, however, more than his efforts to mend fences with the Arab world now, and with Egypt in particular."

And the poor state of US-Turkish relations have also come at a cost. Turkey’s so far subdued reaction to the Biden Administration’s reference to the Armenian genocide may also reflect a foreign policy more on defense than offense.

"Turkey is in no position to threaten to cut relations with Washington and leave the Western security system, and Ankara cannot impose any sanctions on the United States," Cengiz Candar writes. "Biden, in turn, faces only a little political price for recognizing the Armenian genocide, and apparently, he is aware of this fact. Turkey, in its present situation, does not have many effective means or cards to play against Biden. The worst of all is Washington's awareness of this fact."