The Natural History Museum in Abu Dhabi, which is being built and is due to open in 2025, organized an exhibition as a preview of the rare natural specimens the museum will house. 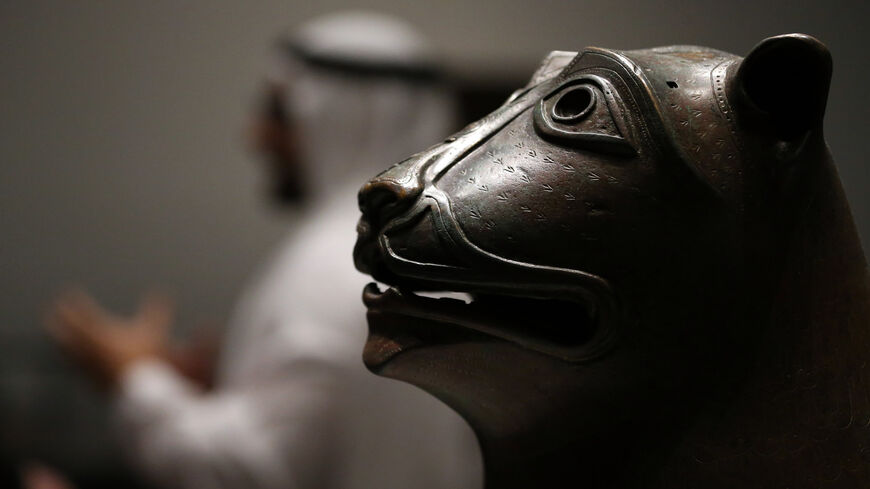 An artefact is seen at the Louvre Abu Dhabi Museum on Saadiyat island during the French prime minister's visit as he launched the French-Emirati "Year of Cultural Dialogue," Abu Dhabi, United Arab Emirates, Feb. 10, 2018. - Karim Sahib/AFP via Getty Images

Abu Dhabi is gearing up for the opening of the Natural History Museum in 2025, according to the Department of Culture and Tourism in Abu Dhabi. The museum will be the first of its kind in the Gulf region and in the Arab region, with the exception of Lebanon, which has its own museum of marine and wildlife.

The Department of Culture and Tourism held a special exhibition in April and May providing a preview of the museum that will be located on the tourist island of Saadiyat, about 500 meters (1,640 feet) from the coast of Abu Dhabi.

A source in the department's media, told Al-Monitor that the exhibition, which ended May 12, included about 12 rare natural history specimens.

“The highlight of the exhibition was a 39-feet-long fossilized Tyrannosaurus rex, nicknamed Stan after Stan Sacrison, a fossil hunter who made the initial discovery of the T. rex bone fragments in 1987. Stan is one of the five most complete dinosaur skeletons that likely roamed the world 65-67 million years ago. Stan’s age is estimated at 22 years and the skeleton shows puncture wounds on the back of the skull, which is believed to be the cause of death,” the source added.

According to an article published by National Geographic March 23, T-rex Stan disappeared after being sold to an anonymous buyer at an auction at Christie's for $31.8 million in October 2020.

The skeleton later reappeared in New York, which exported it to the United Arab Emirates in May 2021. The article noted that officials in Abu Dhabi are in the process of building a new museum of natural history that will “house the prized skeleton.”

The source said that the exhibition was located near the site of the future museum where construction has already started to showcase what the museum would look like. “It featured natural history specimens, such as two pieces of the lunar meteorite found in northwest Africa. These two pieces are believed to have originated in the asteroid belt between Mars and Jupiter.”

He added, “The exhibition showcased the Murchison meteorite, which is a rare type of meteorite said to be part of a stardust, consisting of organic particles billions of years older than the solar system, according to geologists.”

Another source closely working with the Department of Culture and Tourism, told Al-Monitor, “The exhibition also featured a set of skeletons of extinct animals that lived in the Arabian Peninsula and in agricultural areas of Abu Dhabi, such as the skeleton of the four-tusked primitive elephant that lived in the Sweihan region millions of years ago in the late Messinian Stage in the Arabian Peninsula.”

The source added, “The exhibition also included the skeleton of the critically endangered species of the longcomb sawfish discovered in the tropical waters of the Indian Ocean,"

It continued saying that the Natural History Museum will be a research and scientific institution and a leading educational center on the evolution of our planet. “It aims to build a lasting passion for the natural world among visitors of all ages,” he noted.

The museum will host a world-class scientific research center that will conduct studies in the fields of zoology, entomology, paleontology, marine biology, molecular research, including genomics and proteomics, and earth sciences. “The research center also aims to enhance and develop knowledge by providing an understanding of the past and innovation for the future, based on the latest technologies,” it noted.

It added, “The museum will attract thousands of tourists to Abu Dhabi, specifically to Saadiyat Island, which along with Baniyas Island, are among the most prominent tourist islands in the emirate. Saadiyat has numerous artistic and cultural centers as well as theaters for international concerts. The island recently became an attraction destination for Arab production companies to film artworks. Also, it houses high-tech and luxurious cinemas visited by many world-famous and Arab personalities.”

According to the Department of Culture and Tourism, “The Natural History Museum Abu Dhabi will be a scientific research and teaching institution, as well as an educational resource for learning about the evolving story of our planet, aiming to ignite a life-long passion for the natural world in visitors of all ages."

An area of ​​more than 35,000 square meters (8.6 acres) has been allocated for the museum in the center of Saadiyat Island, which is an internationally renowned art hub. The island is home to the Louvre Abu Dhabi, Zayed National Museum and the international art gallery Manarat Al Saadiyat Gallery, along with other international cultural centers.

The museum project is supervised by leading architecture firm Mecanoo, a long-standing Dutch firm founded by Francine Houben in Delft, the Netherlands. The firm has built itself a reputation for designing vibrant and engaging spaces such as the TU Delft Library. The firm, whose portfolio includes a series of global projects, renovated the Martin Luther King Jr. Memorial Library in Washington.

Both sources preferred not to go into the details of the proposed budget for the construction of this project, noting that these details will be revealed in a special press conference upon project completion.