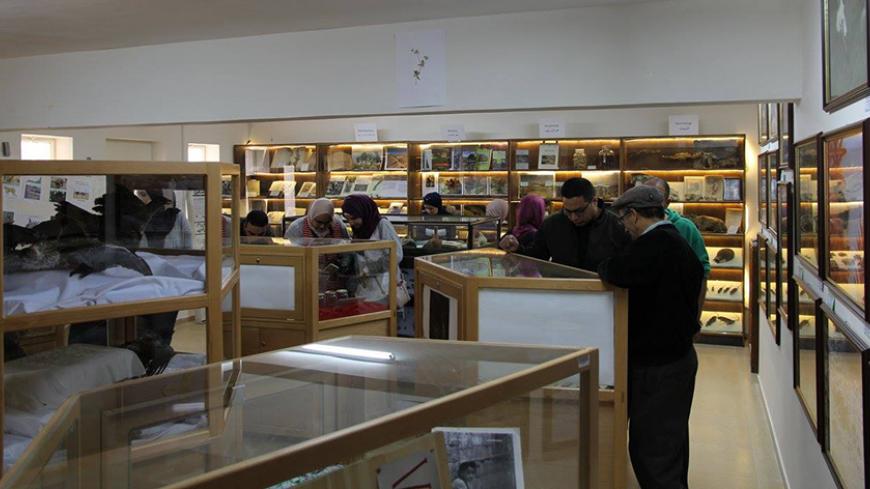 BETHLEHEM, West Bank — The Palestine Museum of Natural History at Bethlehem University opened its doors to the public on April 12. The museum, located in the southern West Bank, is one of the first museums of its kind in Palestine and the Arab world. The museum’s officials aim to turn it into a major center for research, teaching and development in biodiversity in Palestine.

Work on the museum began in 2014 when Mazin Qumsiyeh, the museum’s director and an expert on biodiversity, started to collect samples and scientific research from Palestine to identify and then categorize its natural biodiversity.

Qumsiyeh told Al-Monitor that he came up with the idea for the museum a long time ago, but it was only after he found the needed resources to open it that he began to establish it in cooperation with Bethlehem University, where it is an extension of the university's scientific and research program.

Qumsiyeh said that the museum's staff, including seven full-time employees and several Bethlehem University professors, have published 25 research papers in local and international scientific journals in the lead-up to the museum's opening. “We have focused our research on the impact of variables on nature and biodiversity, such as the construction of the [Israeli] wall, Israeli settlements and industrial areas in these settlements. The first research we conducted was about the impact of settlements and their waste,” he said.

Anyone can visit the museum free of charge, whether they are citizens who wish to learn about Palestinian nature, or academics conducting environmental research.

Qumsiyeh’s family donated $250,000 to the museum’s operational costs, and Bethlehem University donated $450,000. However, the final cost is yet to be determined, as the museum is still a work in progress.

According to Qumsiyeh, the opening of the museum is the first step toward bigger goals. He hopes to open a comprehensive institute in connection with the museum to include over 10 divisions, including departments for management, accounting and development, in addition to sections on the science of insects, spiders, reptiles, birds and mammals, as well as general exhibits on ecology.

The Palestine Museum of Natural History also provides educational services to school students who visit on field trips by introducing them to biodiversity and recycling. Students also learn about ways to reduce environmental pollution.

The museum is considered an asset to the environment in Palestine in light of the environmental devastation caused by the Israeli occupation. It will help promote the rich biodiversity of Palestine, where some 51,000 species of flora and fauna are found, which constitutes 3% of the world's biological diversity, according to a December 2016 report from the Palestinian Central Bureau of Statistics.

In this context, Walid al-Basha, an expert on biodiversity and a lecturer at An-Najah University in Nablus, told Al-Monitor that the museum fills the gap in the biodiversity field in Palestine.

“This museum will focus on the developments biodiversity in Palestine achieved throughout the ages and help preserve the existing [environmental wealth],” Basha said.

Basha said the museum’s value lies in it being a hub to collect and preserve rare samples instead of their being dispersed throughout Palestine. This consolidation will open new horizons for researchers who can benefit from a single research reference.

Mohammed Salim Shtayyeh, the director of the Nablus-based Biodiversity and Environmental Research Center (BERC), said the museum’s main role is to provide the scientific community with historical and modern samples for research.

He told Al-Monitor that a museum like this can facilitate research for scientists by providing samples from the surrounding environment to study. Shtayyeh said the museum will require support to develop and maintain a consistent scientific repository that classifies and displays samples properly.

“The museum is a national project that all authorities should back and provide the necessary financial support for it to continue, both from the government and the local community,” he said.

Shtayyeh believes that similar efforts from reserves and biodiversity centers like BERC complement the museum’s work. He said all these efforts, including the establishment of the museum, contribute toward reaching the greater goal of preserving biodiversity in Palestine.

Museum officials are trying to expand this concept to Arab countries. Qumsiyeh said he went on a business trip to Jordan in April to discuss the idea of opening a museum there.

The most important aspect of this museum lies in ensuring its continuity and finding permanent sources of support so it doesn't turn into a seasonal project.