Turkey’s top court ruled that forcing compulsory religious education on minors against their parents’ will violates their rights, but will the government heed it? 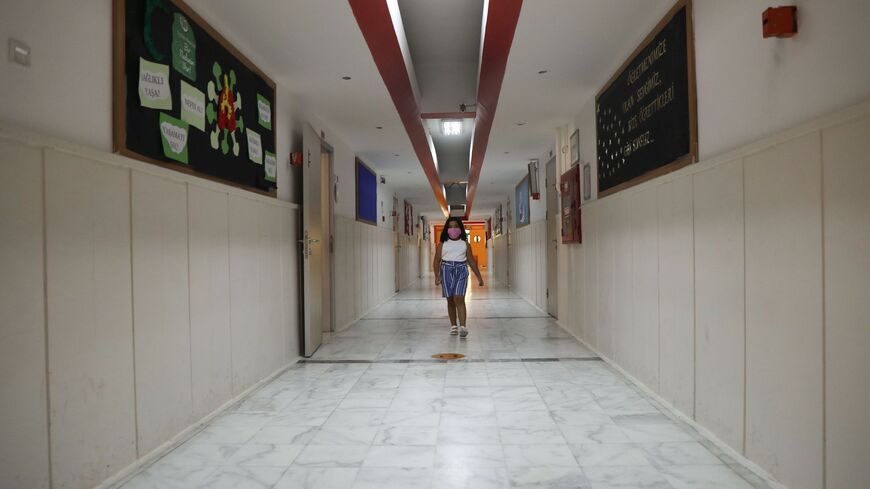 A child wearing a pink face mask walks in a corridor at Cankaya primary school in Ankara, Aug. 18, 2020. - ADEM ALTAN/AFP via Getty Images

Turkey’s top court ruled that compulsory religion classes violate freedom of religion, upholding the two past rulings of the European Court of Human Rights (ECHR) that criticized Ankara on the principle and content of compulsory religious education.

The Constitutional Court’s verdict last week follows a long legal battle by Huseyin El, who wanted to pull his daughter out of compulsory education classes more than a decade ago because their content was not in line with his religious and philosophical beliefs. The school principal insisted that Nazli Sirin El, a fourth grader at the time, should take the course because only Christian and Jewish citizens of Turkey could be exempted. Nazli Sirin El is neither. She and her father are Alevis, a branch of Islam whose believers worship in a cemevi, rather than a mosque, with men and women alongside one another. But El insisted that it mattered little whether he was an Alevi, Jewish or an atheist, challenging the concept of compulsory religious courses and his right to stop his child from attending them.

“We argued that forcing a parent to reveal or document his faith is also a violation of Constitutional Article 24, which says no one can be forced to reveal religious beliefs and convictions,” his lawyer Esra Basbakkal told Al-Monitor.

The initial court in Ankara ruled in El’s favor 13 years ago, saying he had the right to pull his daughter out of the class based on domestic law, international conventions and a similar ruling by the Strasbourg-based ECHR. But the Education Ministry appealed the case to the Council of State, which reversed the decision. Finally, it landed on the desk of the Constitutional Court in 2014.

Eight years later, the Constitutional Court ruled on March 7 that the denial of the father’s request to pull his child out of the class was a violation of parents' rights to have their minor children educated according to their religious and spiritual beliefs. The school’s refusal to take El out of the class violated the freedom of religion and conscience enshrined in Article 24, said the ruling.

“We have to wait for the full verdict,” Basbakkal said. “But, ideally, the ruling should be a broad one on the concept of freedom of religion and create a precedent for people in similar situations who do not want their children to take those classes because of their religious and philosophical beliefs.”

“This is a delayed decision, but it is a step in the right direction,” said Orhan Kemal Cengiz, a human rights lawyer familiar with El and two similar cases taken to the ECHR. “Local courts often ignore the ECHR decisions, but they now have to heed the Constitutional Court's.”

The conservatives in Turkey spat venom over the ruling. “Scandal decision from the Constitutional Court,” read the headline of arch-conservative Yeni Akit.

“Branding religion lessons for the youth of these lands shaped by Islam as a human rights violation is nothing but treason. Our people would not allow such treachery,” tweeted Mehmet Akif Yilmaz, a ruling Justice and Development Party (AKP) deputy and member of the parliament’s Education Commission.

“The deputy’s statement is a blatant distortion of what the ruling says,” Gunal Kursun, a human rights lawyer and the former president of the rights group Human Rights Agenda Association, told Al-Monitor. “Neither the Constitutional Court nor the past verdicts of the ECHR place any obstacles on getting a religious education for those who want to do so. It simply says that these lessons should not be forced on those who do not want it.”

Religious classes in Turkey were voluntary until the 1980 military coup. The military regime led by General Kenan Evren not only changed the weekly lenient religion courses at secondary schools to compulsory lessons but engraved the change in the 1982 Constitution. The aim was ostensibly to provide the students with scientific, objective and unbiased knowledge of Islam in tightly controlled school curricula to arm them against fallacies, myths and fanaticism. In reality, the classes mostly trumpeted a Sunni Islam that fed unease with Turkey’s Alevis and many secular-minded parents who said that the course should teach more religious history than Islamic obligations.

The compulsory classes have become one of the barometers of the gradual reversal of the secular education introduced by Turkey’s early Republican governments, particularly after the AKP government took power in 2002. The introduction of a new school system in 2012 opened more religious schools and introduced new optional religious courses: Quran, Life of Prophet Muhammad and Basic Religious Knowledge. In most cases, the nominally optional courses became compulsory, because there were no alternatives. “I hear anecdotes all the time that elective religious classes are not elective because you end up having to choose between one religion course or another rather than a secular alternative,” said Kursun.

Will the Constitutional Court’s decision will stir any move on the part of the government, or will it be ignored like the ECHR rulings in 2007 and 2014? Both rulings say that compulsory lessons violate people’s basic right to education. In both cases, the principal applicants of the case were from an Alevi background and complained that their children were being taught the Sunni understanding of Islam.

“The curriculum presents Alevi as a culture, not as a faith. This marginalizes the Alevi people,” Mehmet Ersal, guest professor at the London-based Royal Anthropological Institute, told Al-Monitor. The principal Alevi rites, such as cem and samah, were presented as cultural activities or folk rituals rather than as religious rites, he said.

“At a first glance, it looks like a problem for the Alevis, but it is not,” Ersal added. “This matters to all people who want a more secular, more progressive education.”

AKP heavyweights including President Recep Tayyip Erdogan, who had said in the past that he “neither respected nor would obey” the Constitutional Court rulings on journalistic freedoms, have not commented.

Ali Kenanoglu of the Peoples’ Democratic Party submitted a question April 12 to Education Minister Mahmut Ozer regarding whether the government will continue to treat religion courses as compulsory.

“If the government wants to do anything, there are three paths that it can take,” Cengiz told Al-Monitor. “It can create a neutral religious class, with equal standing on all religions and faiths. The second is to make religion courses voluntary again, like before 1980. The third is to simply let students opt out of religion classes with a simple request, a single form from their parents without having to divulge their beliefs."

For lawyer Basbakkal, the best legal option is to make the lessons voluntary. But given the government’s attitude toward creating a pious generation and making even more religious education compulsory, it seems unlikely. Last September, Diyanet announced that it would seek to introduce compulsory Quran courses to preschoolers. Pilot courses are underway in several cities.