The European Court of Human Rights decided Turkey must reform religious education in schools to ensure respect for parents’ convictions. 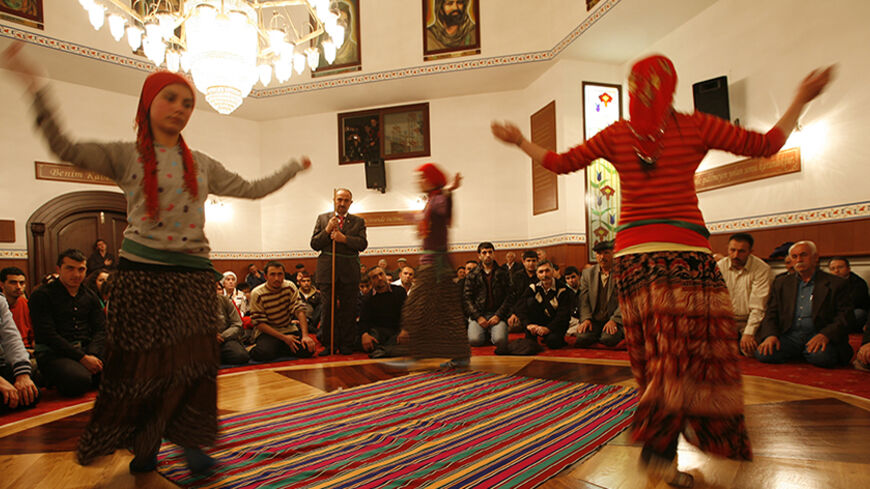 Alevis dance during a prayer in a cemevi house in Istanbul, April 3, 2008. - REUTERS/Umit Bektas

Turkey’s ruling Justice and Development Party (AKP) for over a decade has been claiming that its era has marked a turning point in the country’s democratic advancement and, therefore, its religious freedoms. Turkish President Recep Tayyip Erdogan tirelessly argued that women with headscarves were denied a place in society before the AKP came to power, and that his rule has guaranteed those pious women breathing room without interfering with anyone’s lifestyle. With a Sept. 16 decision, however, the European Court of Human Rights (ECHR) has provided yet another challenge to the government’s assertions about the country’s religious freedoms.

The court unanimously decided that Turkey violates people’s basic right to education by forcing pupils to attend compulsory religion and ethics classes while “still inadequately [being] equipped to ensure respect for parents’ convictions.” The principal applicants of the case are all from an Alevi background; they complained that their children were being taught religion with the Sunni understanding of Islam, treating “the Alevi faith as a tradition or culture and not as a belief system in its own right,” and therefore forcing these children to face conflicts between the religious instruction given by the school and by their parents.

The court found the parents’ complaint to be just and noted that Christian and Jewish pupils in Turkey were exempted from religion and ethics classes: “The court noted in this connection that almost all of the member states offered at least one route by which pupils could opt out of religious education classes, by providing for an exemption system or the option of studying an alternative subject, or by making attendance at religious studies classes entirely optional.”

Emphasizing that the government would look into the details of the court’s ruling before issuing its final word, Turkish Prime Minister Ahmet Davutoglu strongly objected to the court’s finding, saying, “Religion cannot be classified as a tool of oppression. … If proper religion is not taught, it produces unhealthy and incorrect religious information that leads to the radicalization seen in our neighboring countries. Just as I should know about Marxism despite the fact that I am not a Marxist, it is necessary for an atheist to have knowledge of religious culture."

Riza Turmen, a former ECHR judge and Izmir deputy for the main opposition Republican People's Party (CHP), told Al-Monitor that neither of Davutoglu’s arguments holds well. “All of those who joined the Islamic State from Turkey have attended these compulsory religious classes, and this did not prevent them from doing what they did. In contrast, those Alevi children who do not want to attend these courses have not joined these radical groups. They don’t volunteer for these radical movements.”

Yet, Ali Karahasanoglu of the pro-government Yeni Akit daily argued in his Sept. 18 column that ECHR is two-faced when it comes to Islamic teachings and practices. Referring to the 2005 Leyla Sahin case where the court found no contradiction with a law where a university banned her from attending classes for wearing a headscarf, Karahasanoglu said the high European court must have a problem with the Islamic faith. Yeni Akit also published on its front page the following headline: "Infidelity from ECHR." The paper argued that there are a number of other European countries with compulsory religious education, but that the court treats Turkey unfairly and unjustly.

The CHP's Turmen categorically objected to these arguments as well, arguing that the ECHR only applied the rule of law. “It takes a wild imagination to make a connection between these two cases,” Turmen told Al-Monitor. “The principle here is that the state needs to remain neutral and impartial toward all its citizens. It is therefore not even the place of the state to determine whether a cemevi is a legitimate religious gathering place for Alevi people or not. Moreover, if the state is sincere in saying the curriculum provides a wide range of religious teachings in these compulsory classes, why are Christian and Jewish children exempt? It is clear that there is an issue and that there is a growing Sunni indoctrination in these classes — this is where the court calls on Turkey to reform.”

While the Turkish education system has actually seen numerous reforms in the past decade, some of them seem to be creating more problems than solutions. Since 2005, for example, schools started to offer three new elective courses on religion, which also created controversy. These were basic religious knowledge — mainly about Islam, the life of the Prophet Muhammad and Quran — courses. Many parents of Sunni origin also complained about these courses, arguing that the schools exerted pressure on their children to enroll in them. And grumbling that the government is slowly but surely indoctrinating children at early ages to Islam is growing. “The issue is that the government is trying to create a monolithic identity involving religion in the new Turkey. It doesn't seem to be willing to give space to differences,” Turmen said.