The Turkish government has changed the public school dress code, allowing 9- and 10-year-old female pupils to wear headscarves to school. 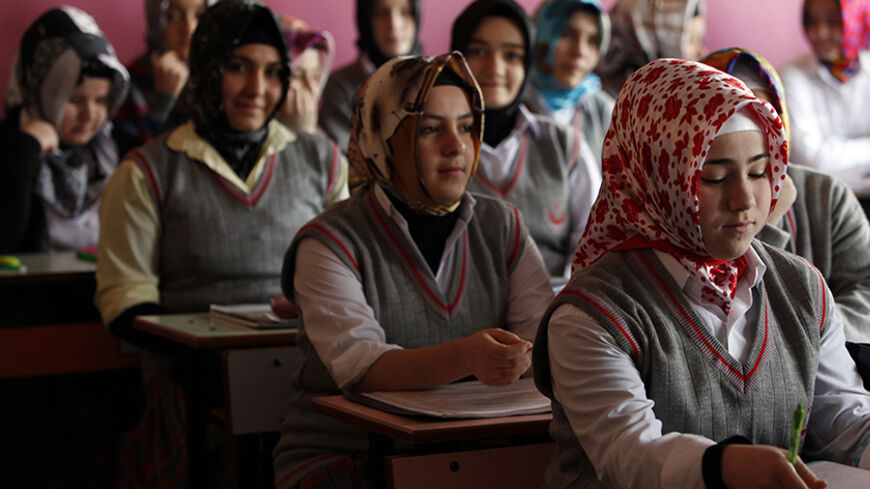 Turkish Prime Minister Ahmet Davutoglu said Sept. 22 that his government’s decision to allow headscarves after primary school should be considered as a step to strengthen the country’s freedoms and democracy. The government rewrote the dress code regulation for the public schools by lifting the obligation that female students attend school without head coverings. “Those who try to draw restrictions argue this will lead to pressure on some people. That is to say that there is a forced pressure on some people for others not to come under a potential pressure,” Davutoglu said. “There is no such freedom perception. Everyone lives their own life.”

With the advance of radical terrorists such as the Islamic State giving Islam a bad name, and the overall impasse in the Muslim world over fighting radicalism, a goodly portion of the population is concerned that these steps will drag the country into some sort of darkness rather than toward advanced democracy. The Islamist-based Justice and Development Party (AKP) government has been good at arguing tirelessly for the last 12 years that pious people have been oppressed by the previous secular governments.

It has been no secret that the AKP government set religion as the core priority of its domestic and foreign policy decisions. Davutoglu, for example, said Sept. 20, “We made this conservative, pious people, not a part of it, but the main actor of the political system.” Overlapping with Turkish President Recep Tayyip Erdogan’s commitment to “raise religious generations,” Davutoglu’s statement makes it clear that this approach of making the religious segment the main actor of Turkish political life at the cost of isolating the secular population cannot lead to the normalization of the country.

Davutoglu is determined that religion be key in shaping the direction of the country. “I said it in response to the [European Court of Human Rights, or ECHR] decision on religious classes,” he said. “It does not matter whether one is different or not; all are obligated to have this religious education because you can not explain anything in this region without the religious factor.”

If the headscarf for girls from 9-10 years old at school is a freedom issue, the families and the children must also have the right to choose either not to attend the religion classes or to demand that the state provide a more comprehensive education not limited to Sunni indoctrination. The ECHR, however, decided unanimously Sept. 16 that Alevi families in Turkey have a right to be concerned that their children are exposed to a Sunni understanding of Islam where their faith is treated as a tradition or culture, forcing the children to face conflicts between the religious instruction given by the school and by their parents.

Challenging the government’s freedom argument allowing headscarves in early education, Cigdem Toker of the Cumhuriyet daily argued Sept. 24 that this government decision “will give the fathers of those 10-year-old female students [the right] to cover their heads.” She also stated that this age is when menstruation begins, signaling girls attaining their maturity. “Don’t please even attempt to tease our wisdom, possibly in the not so distant future, by coming up with a proposal to end mixed education [and] that this is also going to be done to respect people’s freedom.”

Former teacher Engin Altay, the main opposition Republican People’s Party (CHP) Sinop deputy and parliamentary group deputy chief, warns that the change in the dress-code regulation of public schools does not specify any division as kindergarten, primary, secondary or high school. “Therefore, this change in the dress code will even [eventually] impact those students in kindergarten,” Altay said Sept. 23. “They will just try to slowly adapt people to this change, arguing that they won’t allow headscarves in primary schools. They will, however, get to it in time.” Primary school generally goes through fourth grade in Turkey.

Gursel Tekin, deputy chairman of CHP and Istanbul deputy, also stressed Sept. 23 that there would be no way for the families and the girls to escape public pressure and that this change will force more girls to cover their heads. “While the government took this decision to change the country’s agenda, our little girls will be sacrificed to neighborhood pressure,” Tekin said, implying that especially those families in Anatolia will force the girls to don headscarves to uphold the family honor.

Turkish dailies published pictures Sept. 24 of female students in fifth grade and above with their headscarves at school.

It is evidently no small issue for any female to open her piety to discussion, which makes it so abundantly challenging to talk about the embedded perceptions linked to headscarves or conservative clothing. Ezgi Basaran of Radikal, for example, wrote Sept. 24 that there are discussions in today’s Turkey that even women in their 30s don’t consider themselves free in picking out their clothing due to how society may judge them. She wonders, however: If the issue is really to strengthen the country’s freedom and democratic standards, why not allow Kurds education in their mother tongue, or allow the reopening of Halki Seminary [Eastern Orthodox Church] and accept cemevi as religious gathering halls for Alevis?

The US Commission on International Religious Freedom 2014 Turkey annual report said the Turkish “government’s continued failure to follow through on the long-promised reopening of the Halki Seminary [is] a disturbing indication of a lack of genuine will to resolve this longstanding religious freedom violation.” The commission “heard views from some religious minority communities that conditions had worsened and that the steps taken were negligible, as well as concerns that the improvements, which are not codified in law, could be easily revoked, especially in the current political climate.”

And this current political climate makes a goodly portion of the Turkish population worried about whether religion will or will not dominate their future.