The AKP government, which faces an uphill battle to mend ties with the Alevi community ahead of next year’s elections, pledges to bring culprits to justice. 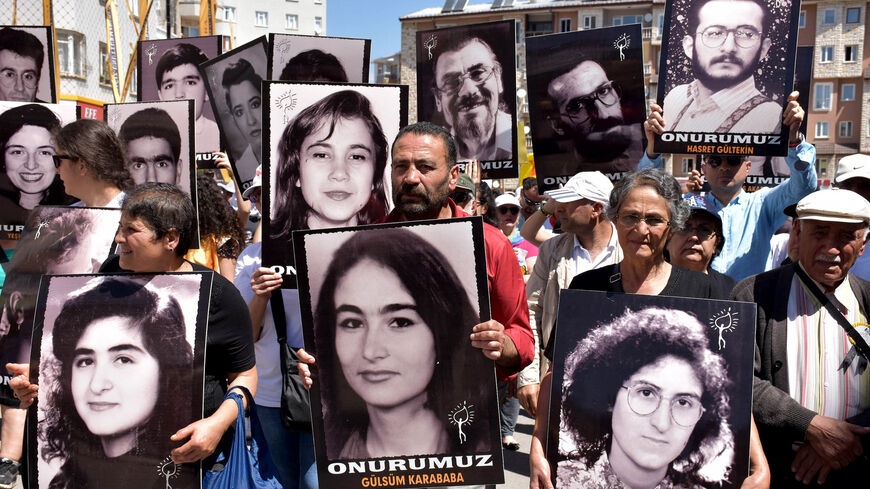 Turkish activists and opposition members gather with pictures of victims — largely from the Alevi community — killed in Madimak Otel on July 2, 2018, in Sivas. - HUSNU UMIT AVCI/AFP via Getty Images

A string of attacks on places of worship and a community leader of Turkey’s largest Alevi community has roused fears that a surge in nationalism is stoking ethnic tensions ahead of next year’s elections. The attacks prompted President Recep Tayyip Erdogan to visit an Alevi temple for the first time since he became president to assure the community that the culprits would be brought to justice.

The president broke the fast with the members of the Alevi community at the historical Huseyin Gazi Cemevi — the Alevi place of worship — on their holiday Ashura on Aug. 8. The day marks the anniversary of the death of Imam al-Hussein, killed in the year 680 AD during the Battle of Karbala in what is now Iraq. Some members of the community declined to be present on the grounds that the visit was a political show, according to media reports.

On Aug. 5, two men attacked Selami Saritas, the leader of a cemevi in Istanbul’s Kartal district. Saritas explained that two men on a motorcycle stopped him to ask for directions while he was in his car. But once he opened his car window, they attacked him. “One started shouting insults at me, all the while trying to punch me,” he said, explaining that he kept the car horn pressed the entire time to call for help.

The attack on Saritas on Aug. 5 comes after five different Alevi institutions in the Turkish capital of Ankara were attacked and vandalized last week, raising fears of a flare-up in the Sunni-Alevi rift. The timing coincides with the beginning of Muharram, a holy month for Alevis, heterodox Muslims who make up as much as 20% of the 80-million-plus population of Turkey. During this month, believers mourn the killing of Imam Hussein, the grandson of Prophet Muhammad, and fast — often breaking their fast with large communal meals.

“Sadly, these attacks have occurred during our month of mourning,” said Saritas, who also holds the deputy chair of the Federation of Alevi Foundations, one of the largest platforms of the community. “I have filed a claim. The attacks against our community in our days of mourning are no good. But we are a peaceful community and will not rise to the provocations.”

In the wake of the attacks, seven Alevi organizations, including the federation, made a joint statement condemning the attacks. “We are aware of this dark period that our country has been going through. We condemn such attacks aimed at intimidating Alevi institutions," said the statement. "Throughout the history of these lands, Alevis have fought to establish a common life based on equal citizenship with feelings of solidarity, unity, togetherness and brotherhood. It is our call to the public: Let's find solutions to end these attacks and hate crimes.”

Suleyman Soylu, the iron-fisted interior minister, personally called Saritas to wish him well after the incident. He also assured him that the police were carrying out a thorough investigation of all the attacks, a statement from the Interior Ministry said.

Last week, Turkish authorities detained Ahmet Ozan Karaca, a man from the Aegean port town of Izmir, who burst into the Turkmen Alevi Bektashi Foundation headquarters, Sah-i Mardan Cemevi, and Ana Fatma Cemevi to stage attacks. Ismail Catakli, the spokesman for the Interior Ministry, said on Aug. 3 that Karaca and the two men who were questioned on the attacks were “connected to some terrorist groups.” Pro-government daily Yeni Safak said the three belonged to Revolutionary Youth Association, a group related to the extreme-left armed group THKP-C Revolutionary Path. The group denied the allegation, saying it was a tale spread by the pro-government media. “We stand with our Alevi brethren and against those who aim to harm them,” their statement said.

Karaca testified that he had been “told to attack the Alevi institutions” by the Illuminati, a half-mythical secret society that is often at the bottom of conspiracy theories in Turkey and beyond.

But many remained unpersuaded by the blabberings in his statement to the police, which seems to be aimed at diminished responsibility due to mental instability. “It seems strange that a young man from Izmir would arrive in Ankara on the first day of Muharram, attack three cemevis in Cankaya and Mamak in a mere 45 minutes, and then run away successfully,” wrote Abdulkadir Selvi, a pro-government columnist with the daily Hurriyet. In a column titled “What is behind the attack against the cemevis?” Selvi hinted that the statements of the attacker aimed to divert attention from those who encouraged him and helped him to carry out the attacks. A strong supporter of the ruling Justice and Development Party (AKP) who often criticized the AKP’s political alliance with the Nationalist Movement Party and its acid-tongued leader, Devlet Bahceli, Selvi said that the government should not turn a blind eye to the attacks.

Turkey’s Alevis often complain about the lack of protection by the government and discrimination in the predominantly Sunni system. Despite the fundamental differences in religious practices between Sunnis and Alevis, the Turkish government has yet to acknowledge Alevi cemevis as legitimate places of worship or grant cemevis the same financial support as mosques, despite a ruling by the European Court of Human Rights in 2016 and a recognition of cemevis as places of worship by a Turkish appeals court two years later. This lack of recognition is also seen in the school curriculum, where obligatory religious classes teach students that Alevism is a culture, not a faith.

“This marginalizes the Alevi people,” Mehmet Ersal, guest professor at the London-based Royal Anthropological Institute, told Al-Monitor. He said that the principal Alevi rites, such as cem and Samah, are presented as cultural activities or folk rituals rather than as religious rites.

In 2019, the Committee of Ministers, the executive body of the pan-European rights body Council of Europe, asked Turkey to have a concrete action plan on the Alevi issue.

There are also repetitive bouts of violence against the community. In 2017 in the eastern city of Malatya, unknown assailants painted a red “X” on 13 homes in the predominantly Alevi district of Cemal Gursel. Though an investigation occurred, no arrests were made in this conservative, dominantly Sunni city. But the biggest blot in current Turkish history is the 1993 Sivas Massacre when a crowd of Sunni fanatics set fire to a hotel where a group of left-wing intellectuals — mostly Alevites — held a literature conference in the central Anatolian town of Sivas. The guest of honor and the main target was Aziz Nesin, a famous Turkish author and the translator of Salman Rushdie’s "The Satanic Verses," a book regarded as blasphemous by hard-line Muslims. Nesin survived, but more than 30 writers died in the fire.

With elections approaching, Erdogan has been making overtures to the Alevi community by making hints at granting religious status to cemevis. But getting the Alevi vote may prove to be an uphill battle: Many Alevis have a tendency to vote social-democrat, and they have long resented the government’s favoritism toward Sunni Islam and attempts to undermine secularism, which they see as a guarantee. On the other hand, Republican People's Party leader Kemal Kilicdaroglu, likely to rival Erdogan in the next presidential election, is an Alevi. Whether his Alevi identity that he traditionally plays down would be an advantage, a hindrance or inconsequential is the subject of lively debate in Turkey.

Editor's note: Aug. 10, 2022. This article has been updated since its initial publication.