Turkey’s major Alevi organizations announce they will open their houses of worship to LGBTQ individuals in support of equal funeral rights. 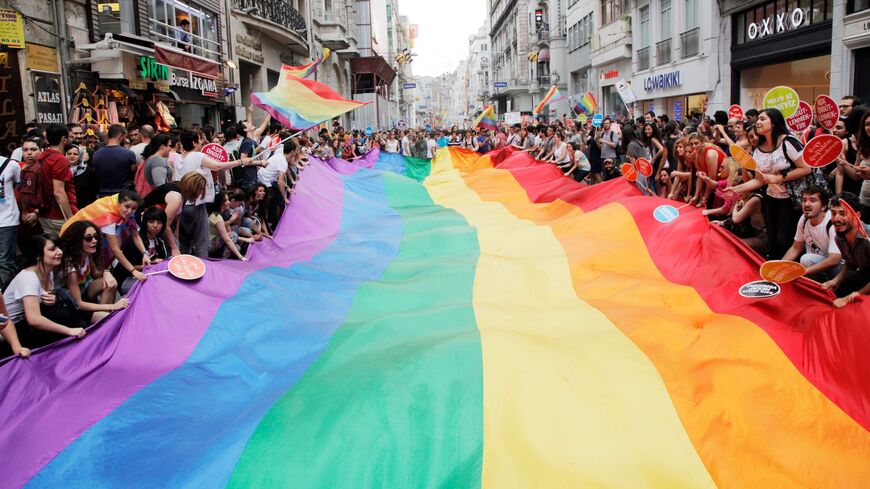 People hold a giant rainbow flag during a parade on Istiklal Street, the main shopping corridor, on June 30, 2013, in Istanbul during the fourth Trans Pride Parade as part of the Trans Pride Week 2013, which is organized by Istanbul's LGBTT solidarity organization. - GURCAN OZTURK/AFP via Getty Images

The mood at an ordinary symposium organized by various civic groups in mid-May suddenly took a joyous and emotional turn for Turkey’s LGBTQ individuals after a groundbreaking announcement by a prominent leader of the country’s Alevi community, which represents a distinct and often stigmatized branch in Islam.

The surprising announcement came on May 13 at the symposium organized by Alevi organizations in Izmir, with the participation of various civic groups, including representatives of Turkey’s LGBTQ community. Ercan Gecmez, the head of the Haci Bektas Veli Culture Foundation, one of the main Alevi organizations in Turkey, announced that Cemevis — Alevi houses of worship — would begin to offer funeral services to LGBTQ individuals to help them bid their final farewells to loved ones without facing discrimination.

“We have a surprise announcement,” Gecmez told the participants. “The doors of the Cemevis are wide open to the LGBT+i individuals,” The announcement marked a first in Sunni Muslim-majority Turkey, where homosexuality and transsexuality remain taboo and LGBTQ individuals suffer from discriminatory practices or discourse even in the country’s most pluralistic circles.

Yildiz Tar, editor in chief of the online news portal of the Kaos GL, a major Turkish gay rights organization, had just taken to the speaker podium to deliver a speech when Ercan asked permission to speak to make the announcement. The crowd broke into applause at the announcement, Tar — whose pronouns are they/them — observed. The announcement was “very surprising” and “pleasing,” they added.

Gecmez explained to Al-Monitor that their doors would be open to LGBTQ individuals regardless of their religious beliefs. “For Alevis, we will ensure a burial with Alevi religious rituals. If they don’t want any religious rituals, then they can [organize their funerals] however they wish. Our places are theirs," he said.

The move was decided among three major Alevi organizations before the symposium and was announced as a “joint decision.”

“We listened to the heartbreaking things that LGBT+i individuals suffer during their funerals. It was impossible for us to remain indifferent to these,” Gecmez said.

The decision signifies more than a symbolic milestone, aiming to save LGBTQ and particularly transgender individuals from most of the discriminative practices throughout funerals.

Imams avoiding performing burials for trans individuals is one example among the many, Tar said. Imams who perform burials, on the other hand, do not honor trans individuals’ identities. “You are a trans woman living your whole life as a woman. But you’re cited as ‘he’ in burial rites. Or you’re a trans man and receive a burial rite as ‘she,’” they explained.

The traditional corpse washing ritual before the burial stands as another example. Under Islamic traditions, the body is washed three times and shrouded in a white cloth before being taken to a mosque for the funeral prayer. Corpse washers often shy away from washing trans individuals’ bodies, according to Tar.

Author Asli Zengin also provides a similar account after conducting several interviews with corpse washers as part of her research on discriminatory practices against trans individuals at funerals. Speaking at a panel in Istanbul in January, Zengin recounted an interview with a female corpse washer who said that trans individuals' bodies should be buried without washing. Zengin conveyed that the corpse washer said she wouldn’t be comfortable with washing the body of a trans individual, although she added that the authorities had the final say on the matter.

The position of the Turkish authorities over the issue, in turn, remains controversial, according to LGBTQ rights groups. For example, according to a 2008 funeral guide issued by Turkey’s official religious body, Diyanet, even trans individuals who underwent genital construction surgery “should be treated” as non-trans and washed accordingly.

While Turkey is a constitutionally secular country, Diyanet’s increasing interference in Turkey's social life has become highly controversial under Turkish President Recep Tayyip Erdogan’s rule. While the hostile environment that LGBTQ individuals have faced in the country hasn’t flourished under Erdogan’s rule, it certainly has intensified over the past years.

Tar noted a religious sermon issued by Diyanet in the first months of the pandemic that claimed homosexuality was the reason for epidemic diseases.

The helping hand that Alevis extended to the community, meanwhile, is not fortuitous; rather, it is emphatic support.

Gecmez explained that Alevis were forced to build their own houses of worship after years of discrimination against their religious rituals at mosques. “Today, LGBT+i individuals are facing the same problems that we’ve experienced. Alevis acted in a sense of solidarity because they wouldn't wish such grievances on anyone. That’s why we made the announcement.”

Gecmez said that the LGBTQ community can freely use their morgues and corpse washing places in Cemevis. “We will do our best to make sure that they bid their final farewells to their loved ones as they wish.”

Yet even this move stops short of ensuring that trans individuals aren’t discriminated against in death.

The major problem that LGBTQ community members face after their death remains parental rejection. Parents or families of LGBTQ individuals often ask authorities that their kids or relatives be buried in unmarked graves.

“On the other hand, your partner who you shared and spent your whole life with has no say in your funeral due to the absence of the marriage right. This is a very heartbreaking situation,” Tar concluded.