Rights activists in Turkey fear a rise in homophobic discrimination and hate crimes as Erdogan vocally stigmatizes the LGBTQ community. 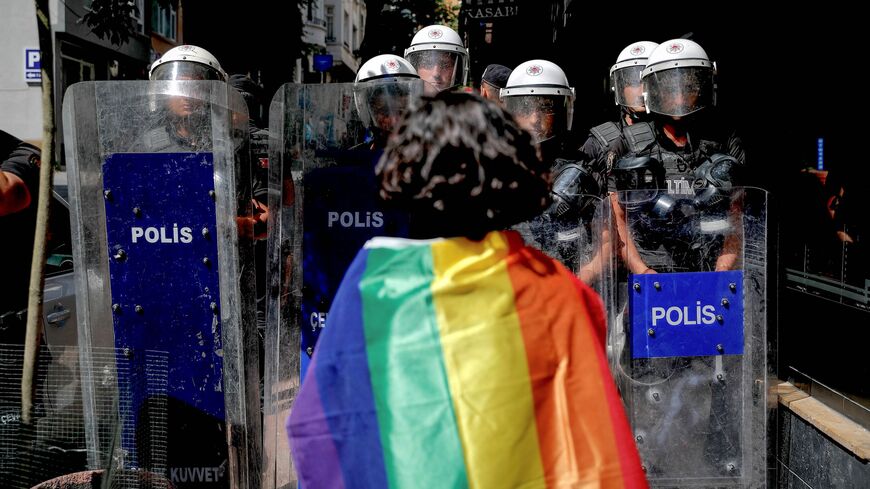 A participant faces riot policemen wearing a rainbow flag during a pride march in Istanbul, on June 26, 2022. - KEMAL ASLAN/AFP via Getty Images

President Recep Tayyip Erdogan’s push for a constitutional change to “strengthen the family” and public affronts to same-sex relationships have left Turkey’s LGBTQ community on edge, with many fearful that the controversy will embolden discrimination and hate crimes.

A draft prepared by Erdogan’s Justice and Development Party (AKP) reportedly introduces an explicit reference to “man and woman” instead of just “spouses” in a constitutional article on the family.

Erdogan has openly framed the planned change as a move against same-sex relationships. In an Oct. 22 speech, for instance, he said, “Can a strong family have anything to do with LGBT? No, it cannot. … We need a strong family. … Let’s protect our nation together against the onslaughts of deviant and perverted currents.”

Erdogan has brought up the issue as part of a push for a constitutional safeguard for the freedom of female public servants to wear the Islamic headscarf. He made the proposal earlier this month to counter the main opposition leader’s efforts to reach out to conservative voters from the AKP’s traditional base ahead of crucial elections next year. Erdogan and the AKP — in power since 2002 — face their toughest election test in June amid economic turmoil eroding their popular support. Erdogan, observers say, could try to polarize the public on hot-button issues in a bid to consolidate his base and lure back disgruntled voters.

Though homosexuality has never been criminalized in Turkey, existing laws do define marriage as a union between a man and a woman. What could change in practice if that norm is enshrined in the constitution remains unclear. Rights activists worry that such a move would only reinforce discrimination against LGBTQ individuals, and even if the move fails, the current rhetoric of government leaders could alone fan hate speech and violence.

“We all know that LGBTI individuals in Turkey are not equal citizens — they have no rights in any law,” Yildiz Tar, an activist from the gay rights group Kaos GL, said, stressing that even the president and the interior minister had come to openly target the community. “A constitutional amendment would formalize the state’s denial of civil rights to LGBTI individuals,” Tar told Al-Monitor.

Could the planned amendment pave the way for some form of interference with gay couples living together?

I.O., a gay man in Ankara who has shared a home with his partner for three years, decried the amendment plan as a “terrible” move that would “take Turkey backward and formalize discrimination,” but he doubted it might lead to direct interventions into the lives of gay couples. “There is a very advanced LGBTI movement in Turkey today. The country’s internal dynamics and the democratic level [society] has reached are unlikely to allow that,” the 35-year-old said.

I.O., a consultant with a political science degree, and his partner, E.A., an engineer, describe themselves as “married.” Unlike many LGBTQ individuals whose education and work lives have been impeded by discrimination, they have progressed in their careers and were able to jointly buy an apartment.

“Private space is the foremost need of homosexuals in Turkey, and many lack the means to own one,” I.O. said. “We’ve been lucky to buy a home and get rid of the grumbles of landlords and neighbors.”

Young adults and teenagers are seen as the most vulnerable in the LGBTQ community. Dozens of parents in Ankara have overcome the stigma and joined the Rainbow Families Association to support their children against homophobia.

Nedime Erdogan is one of them. “How are our children going to cope with all this?” she asked, alarmed by the recent controversy. “There are many people out there who would take it upon themselves to act on the rhetoric of state officials and commit hate crimes.”

Love and affection make a family strong, she said, adding, “Our children have made our families stronger.”