Prosecutors have launched a probe into the bar associations that condemned the head of the state-run religious affairs directorate, for claiming homosexuals are spreading the pandemic. 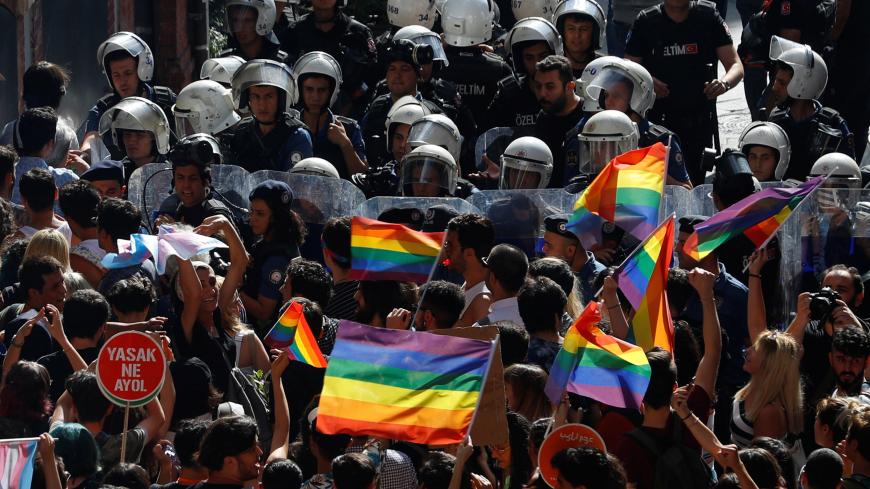 Riot police prevent LGBT rights activists from marching for a pride parade, which was banned by the governorship, in central Istanbul, Turkey, June 30, 2019. - REUTERS/Murad Sezer

Human rights activist Ajda Ender was staying at a friend’s house when Turkey announced its first case of the novel coronavirus in mid-March. “At a time when all state authorities were telling us to stay home, I simply could not, as I was in a legal battle with my neighbors, whose harassment and threats prevented my access to my own apartment,” Ender, a trans woman, told Al-Monitor.

Ender’s case was brought to the parliament’s agenda earlier this year by Zuleyha Gulum, a deputy from the pro-Kurdish Peoples’ Democratic Party, who asked the Ministry of Family and Social Affairs to protect Ender from threats, harassment and physical violence from her neighbors and police officers.

“When she went to the local police station to file a complaint, she was met with transphobic speech. The officers told her that it was the way she looked that caused all this,” Gulum said in a parliamentary question in January.

With the outbreak of the coronavirus, things went from bad to worse for Ender. The neighbors at her friend’s apartment, where she took refuge, cut the water and the internet connection to force her to move, as they believed she may carry the virus. Like many small businesses, her fashion brand, already struggling in the last year, came to a halt.

“We are a vulnerable group and have become even more so during the pandemic. The coronavirus outbreak left me without a job and a home, yet when I applied for financial support from the Ministry of Social and Family Affairs, I was rejected,” she said, sending Al-Monitor the negative reply to the request. “Not only do we not get any help from the government, but statements by members of the government and top bureaucrats put us at risk of physical and verbal attacks.”

Ender’s complaint comes as part of an explosive debate on mounting trans- and homophobia in Turkey, spurred by the remarks of Ali Erbas, head of Turkey’s Religious Affairs Directorate. In an April 24 sermon, Erbas said that Islam condemns adultery and homosexuality because they “bring disease and corrupt generations.” Hundreds of thousands of people every year are exposed to HIV due to homosexuality and adultery, he stated.

“Come and let’s fight together to protect people from such evil,” he said as Turkey’s COVID-19 tally mounted, making the country a regional hotspot for the pandemic.

The remarks immediately drew the ire of human rights groups and bar associations, which accused Erbas, a close confidant of President Recep Tayyip Erdogan, of inciting hatred against Turkey’s vulnerable LGBTI community and HIV-positive citizens. Gay rights group Kaos GL said Erbas had "spewed hatred" with "unscientific claims.” The Ankara Human Rights Association declared that it would file a judicial complaint against him for inciting hatred. The Izmir Bar Association said it was concerned the statement could encourage new hate crimes.

Unsurprisingly, Erdogan threw his weight behind Erbas. “An attack on Erbas is an attack on the state,” the president said in a thinly veiled warning to critics April 27. Almost simultaneously, prosecutors launched a probe into the Ankara Bar Association for “belittling the religious values adopted by part of the Turkish society.” The Diyarbakir Bar Association faced a probe on the same grounds.

Government officials rallied to the side of Erbas as well. Suleyman Soylu, the powerful interior minister, tweeted with the hashtag #AliErbasisnotalone, “Here it is, brief and clear, we love Ali Erbas and we need his words.” The deans of theology faculties issued a declaration of support, restating that homosexuality was against Islamic teachings.

“It is extremely concerning to see some of Turkey’s top government representatives appearing to endorse hateful remarks by the head of the religious affairs directorate,” Hugh Williamson, Europe and Central Asia director at Human Rights Watch, said in a statement May 1. “Turkey’s government has an obligation to protect everyone from hate crimes and discrimination, and should not tolerate statements by officials that encourage hate crimes and target LGBT people and those living with HIV.”

The controversy comes amid increasing homophobia in Turkey, where homosexuality is legal, but the LGBTI community is subject to abuse, harassment, violence and even murder. Many activists claim that homophobia and transphobia have increased with the coronavirus outbreak as many people regard the LGBTI community as carriers of the virus.

“Some of the commentators on mainstream and social media have stepped up their attacks on the LGBTI community during the coronavirus pandemic,” said Yildiz Tar, a member of Kaos GL. “This is hardly new, but it is particularly perturbing that this hate speech is repeated by officials who portray the LGBTI as the culprits, rather than victims, of the pandemic. I am concerned that this hate speech, which has intensified over these critical days, will continue after the pandemic, becoming a permanent fixture of the political rhetoric.”

Homophobia in Turkey has reached TV series and even children’s artwork in the last two months. In April, “Love 101,” a high-school drama set in the '90s about a bunch of unruly teenagers, came under fire because one of the main characters was alleged to be gay. Though the series’ trailer gave no such indication, conservative columnists and others kept referring to a “Netflix conspiracy” as the series was allegedly timed to start at Ramadan and named the gay character “Osman” — the name of the third caliph of Islam — deliberately to insult Muslims. United under the hashtag #Netflixadamol ("literally Netflix be a man," but meaning "be decent"), they called on Turkey’s media watchdog to censor the series, but it went online as planned on April 24. There ended up being no indication that Osman, a resourceful teen entrepreneur-in-the-making, was gay. However, conservative media outlets continued their attacks on the series for encouraging the Turkish youth to “form gangs, engage in crime, use drugs and have perverse relationships.”

Even more strangely, the art museum Istanbul Modern's online activity inviting children across the country to draw rainbows and stick them in windows to cheer up confined Turks, also came under fire. Egitim-Sen, a teachers’ trade union, confirmed that some local education directorates had called on school principals not to allow children to participate in the project, saying it was an LGBTI plot to turn children gay.

The LGBTI rights group ILGA Europe ranked Turkey second from last — just ahead of Azerbaijan — in its review of 49 European and Central Asian countries in its 2020 report. Hate speech toward LGBTI Turks is steadily rising, said the report, citing statements by Soylu and the Religious Affairs Directorate as examples.