Activists saw the tweet from the head of Turkish Red Crescent as targeting the LGBTI community and say such rhetoric puts it at greater risk. 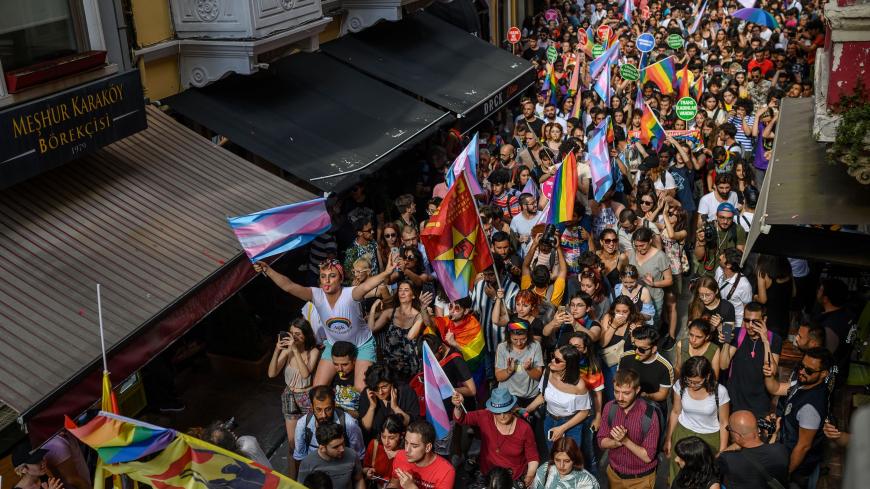 Members of the LGBTQ+ community wave flags as they participate in a march during the Gay Pride parade in Istanbul, on June 30, 2019. - BULENT KILIC/AFP via Getty Images

ISTANBUL — Turkey lashed out at “LGBT propaganda,” claiming it undermined free speech, and defended the head of the Turkish Red Crescent after the humanitarian organization’s international umbrella body said his comments violated its rules against homophobia.

Kerem Kinik, who also serves as one of five vice-presidents at the International Federation of Red Cross and Red Crescent Societies (IFRC), appeared to equate homosexuality with pedophilia in a tweet he made Sunday, when the Turkish LGBTI community typically celebrates Pride Day.

“We will not allow human dignity to be trampled. We will protect natality and the mental health of our children. We will fight whomever violates healthy creation, uses the power of communication to portray the abnormal as normal [and] injects their pedophilic fantasies into young minds as if it were modernity,” Kinik wrote.

His use of the words “dignity,” adopted by the Turkish LGBTI community for their march, and “natality” for birth rate, were interpreted as veiled barbs at the gay community. Kinik later said his tweet was about protecting children and that his approach was “fully coherent” with IFRC values.

“These words are both wrong and offend us all. We condemn homophobia and hate speech of all kinds,” the IFRC said. The Geneva-based organization said its code of conduct forbid Kinik from engaging in homophobia, hate speech and prejudice. “We are assessing our next course of action,” the statement read.

In response, Fahrettin Altun, a senior adviser to President Recep Tayyip Erdogan, tweeted, “LGBT propaganda poses a grave threat to freedom of speech. The IFRC became complicit in that attack by targeting [Kinik] — a doctor who devoted his entire life to protecting children around the world. We won’t be silenced!”

Erdogan weighed in on morality in a speech on Monday, without specifically addressing homosexuality. He suggested an assault on traditional values that is on par with national security threats was underway.

“Some people insidiously attack our national and moral values … by normalizing perversions that have been condemned throughout history and aim to poison young minds,” he said. “I invite all members of my nation to watch out for and take a stance against those displaying any type of perversion forbidden by our God and those who support them.”

Such messages could imperil a community that is already to subject to violence, including the murder of trans women, activists said. A report from the advocacy group SPoD this month showed discrimination and violence due to sexual identity and preference doubled in the 45 days following Erbas’ remarks, compared with the preceding period.

“Statements targeting [gays] from institutions that are supposed to protect citizens … make attacks more likely … since there is no fear of punishment,” lawyer and gay rights activist Levent Piskin told Al-Monitor.

Turkey ranks 48th out of 49 countries tracked by ILGA Europe, a nongovernmental organization advocating for human rights, in its survey of the impact of laws and policies on LGBTI lives. The lack of legal protections contributes to discrimination and harassment. The European Union said hate speech and crimes and violations of LGBTI people’s rights in Turkey cause it “serious concern.”

The government has banned the Pride March since 2015, citing security concerns. Restricting this freedom of expression, assembly and association means Turkey is contravening international obligations, Human Rights Watch has said.

“With the ban [on Pride], this issue becomes criminalized in society’s eyes and [LGBTI people] are more at risk. Without protective mechanisms, these kinds of prohibitions on rights and freedoms and people’s very existence increase violence,” Piskin said.

Homosexuality has been legal in Turkey, a conservative Muslim nation with a secular constitution, since the mid-19th century, and attitudes toward gays are generally more tolerant than in other parts of the Middle East.

Support for gay rights is growing, with 45% of respondents saying gay, lesbian, bisexual and trans individuals should have equal rights in a 2020 survey by Kadir Has University, compared with 36% last year. But 77% of respondents said same-sex relationships were against “our social norms.”

The rise in anti-gay rhetoric in a country already deeply polarized along cultural fault lines may be an appeal to hard-line voters or to shift the discussion to identity issues and away from an economic slowdown during the coronavirus outbreak.

Louis Fishman, a history professor at Brooklyn College who writes on Turkish affairs for Haaretz newspaper, pointed out that Erdogan’s Justice and Development Party (AKP) had long avoided targeting LGBTI people, preferring to “sweep it under the carpet and leave it within the private realm, because Turkish society is very uncomfortable with it out in the open.”

Ahead of his party’s first election in 2002, Erdogan said gay rights should be codified into law and that he found treatment of homosexuals at times to be “inhumane.” Until Pride was banned, the AKP allowed some loosening of curbs on gay life and expression, though progress was always uneven.

In recent years, the leftist opposition has embraced a progressive platform on gay issues, which may be forcing conservative circles to confront the matter as well, Fishman said. While Turkey does not face elections until 2023, the AKP may be seeking to consolidate support as polling shows it has fallen as the economy teeters during the pandemic.

“This may appeal to extreme nationalist or religious voters the AKP has been unable to incorporate into its bloc, but this isn’t a major electoral issue for most Turks. The AKP is going off course from a well-thought-out strategy that existed for years,” Fishman said.