The State Department expressed concern over Turkey's "continued judicial harassment" after a court in Istanbul sentenced philanthropist Osman Kavala to life in prison. 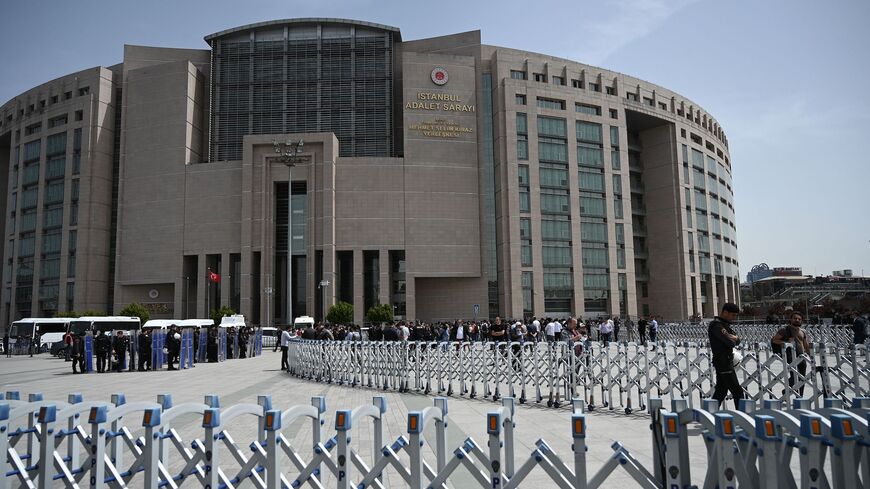 Turkish riot police stand outside the Istanbul courthouse during a protest against a Turkish court decision to sentence leading activist Osman Kavala to life in prison on controversial charges of trying to topple the government that had already seen him jailed without a conviction for more than four years, in Istanbul on April 26, 2022. - OZAN KOSE/Afp/AFP via Getty Images

The United States is “deeply troubled and disappointed” by a Turkish court’s decision to sentence prominent philanthropist and activist Osman Kavala to life in prison without the possibility of parole.

“His unjust conviction is inconsistent with respect for human rights, fundamental freedoms and the rule of law,” State Department spokesperson Ned Price said in a statement Monday evening.

An Istanbul court found Kavala guilty of attempting to overthrow the government of Turkish President Recep Tayyip Erdogan in connection with the anti-government protests that swept Turkey in 2013. The 64-year-old denied all charges against him in the trial rights groups described as emblematic of the country's democratic backsliding.

“We remain gravely concerned by the continued judicial harassment of civil society, media, political and business leaders in Turkey, including through prolonged pretrial detention, overly broad claims of support for terrorism and criminal insult cases,” the State Department said. “The people of Turkey deserve to exercise their human rights and fundamental freedoms without fear of retribution.”

Why it matters:  The strongly worded US statement was welcomed by rights campaigners who say the Biden administration has scaled back its criticism of Turkey as the two NATO allies coordinated their responses to Afghanistan and more recently, Russia’s invasion of Ukraine.

It was “promising in that it shows that the Biden administration has not entirely muted its criticism of blatant human rights violations in Turkey,” said Merve Tahiroglu, the Turkey program coordinator at the Project on Middle East Democracy think tank.

The Biden administration took aim at Turkey’s rights record on several occasions last year. Among its concerns were Ankara’s handling of student protests, a plan to disband a pro-Kurdish opposition party and its decision to withdraw from a European convention aimed at protecting women.

Kavala’s prolonged detention also created friction between Turkey and the United States. Last year, the Turkish government threatened to expel 10 ambassadors, including those of the United States, France and Germany, after they called for Kavala’s release.

What’s next:  Kavala is expected to appeal the verdict, as are seven co-defendants who were handed 18-year prison sentences for aiding in an attempt to overthrow the government. The State Department called on Turkey to release Kavala in keeping with a European Court of Human Rights ruling from 2019, as well as others who are arbitrarily detained.

“We urge the government to cease politically motivated prosecutions and to respect the rights and freedoms of all Turkish citizens,” Price said.

The statement did not mention Henri Barkey, a former State Department employee and US-based academic accused of collaborating with Kavala over the failed coup in 2016. Kavala was acquitted of his coup-related espionage charge, but the charges against Barkey and eight others tried in absentia remain in effect.

Know more:  Andrew Wilks has more on Kavala’s sentencing and the swift international reactions and Nazlan Ertan reports on the new Turkish-US strategic mechanism, whose announcement was reportedly accelerated by the Ukraine war.