A Turkish court has acquitted philanthropist Osman Kavala and eight others of seeking to overthrow the government, but Istanbul’s chief prosecutor has ordered his continued detention on charges stemming from a separate case also pertaining to his supposed involvement in the failed 2016 coup. 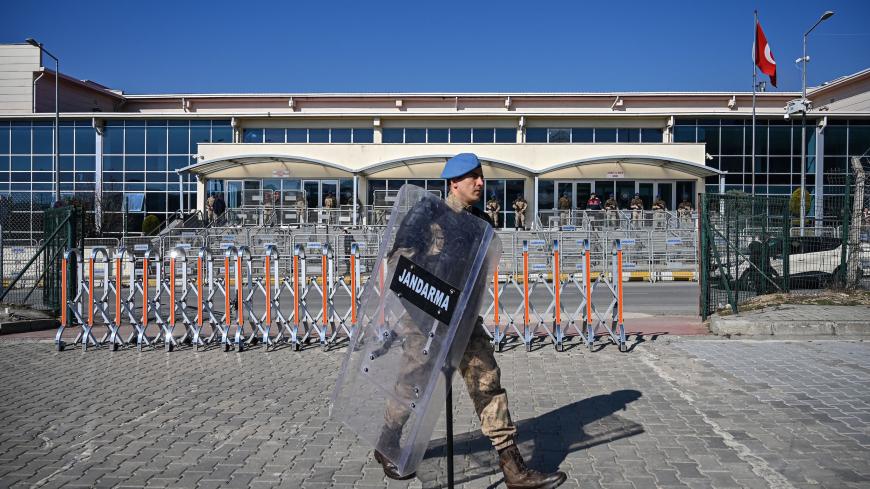 Turkish soldiers stand guard in front of the Silivri Prison and Courthouse complex in Silivri, near Istanbul on Feb. 18, 2020 during the trial of civil society figure Osman Kavala and 15 other people charged with seeking to overthrow the government.

In a widely unexpected verdict, a Turkish court acquitted prominent philanthropist Osman Kavala and eight co-defendants in a high-profile case that has highlighted the malleability of Turkey’s politicized justice system. Kavala, who was held for 840 days on flimsy charges of seeking to overthrow the government, was expected to be finally freed from the maximum-security Silivri prison on the outskirts of Istanbul. The verdict triggered loud cheers from family, friends and international observers present at the hearing. But their joy was short lived. In a counter move, Istanbul’s chief prosecutor ordered Kavala’s continued detention on charges stemming from a separate case also pertaining to his supposed involvement in the failed 2016 coup. It remained unclear at the time of publication whether he will be re-arrested on those charges.

In December, the European Court of Human Rights had called for Kavala’s immediate release, citing a lack of reasonable suspicion that he had committed any crime. As Turkey is a signatory of the European Convention on Human Rights, the court’s rulings are accordingly binding, so Ankara ignoring the court’s opinion was widely interpreted to mean that Kavala would remain behind bars. Hence the surge of disbelief and jubilation.

Pundits rushed to explain the government's apparent U-turn from its protracted smear campaign against Kavala. He was accused of instigating the nationwide demonstrations in 2013 against the government's plans to erect an Ottoman-style shopping center in Gezi park, a rare green space in Istanbul. Pro-government media outlets competed with the court to tout surreal charges against Kavala based, among other things, on secret witness testimony that was later retracted. The conventional wisdom is that the case, opened after the failed 2016 coup, stemmed from Turkish President Recep Tayyip Erdogan’s conviction that Kavala and assorted other, often fictitious, enemies were conspiring with Western powers to get rid of him.

Thus today’s verdict does not signal the judiciary's miraculous recovery of its independence, as attested by the Istanbul prosecutor’s subsequent appeal.

Some point to a struggle within the judiciary between anti-Western forces who view figures like Kavala pushing to strengthen civil society as a threat and others who want to pull the country and the government in the opposite direction. “What is clear,” said a Western diplomat speaking on condition that he not be identified by name, “is that none of this has to do with the rule of law.”

“Were there actual judicial independence, the case against the accused would have never been brought, the accused would have never suffered lengthy pre-trial detention and the case would have been thrown out after the European Court decision,” said Howard Eissenstat, an associate professor at St. Lawrence University and non-resident senior fellow at the Project on Middle East Democracy in emailed comments to Al-Monitor. “I think the pattern remains: Trumped up political charges against perceived political enemies, Kafkaesque prosecutions and pretrial detention as a means of punishment.”

The famously cynical Erdogan may have decided that he is better served by letting Kavala walk. Or not. The last-minute reversal is reminiscent of the plight of prominent author Ahmet Altan, who is also rotting in jail on trumped up coup-related charges. He was freed in November only to be jailed again a week later.

Either way, “Developments in Syria appear to be forcing Erdogan’s hand,” noted human rights lawyer Erdal Dogan. The Turkish leader “has few friends left so he is reaching out to the West again to hedge his bets,” Dogan told Al-Monitor.

Faruk Kaymakci, Turkey’s deputy foreign minister, was in Brussels today to meet EU officials. “He can use the #GeziTrial acquittal as a piece of good news,” tweeted Marc Pierini, a former EU ambassador to Ankara.

Another critical hearing is set for tomorrow — of 11 human rights activists who face sentences of up to 15 years for their supposed role in the abortive putsch. “Ankara will need to show that this is a trend, not a one-off,” Pierini observed.

Russia’s Vladimir Putin is snubbing Erdogan’s demands for a cease-fire in Syria’s Idlib, where Russian-backed regime forces are pursuing their offensive against Hayat Tahrir al-Sham and fellow jihadis. The violence has sent hundreds of thousands of civilians to Turkey’s border. The presence of more than 3.5 million Syrians already sheltering in Turkey has sapped Erdogan’s poll numbers and further arrivals could spell big trouble as his former allies Ahmet Davutoglu and Ali Babacan launch rival parties on the center right, where most of Erdogan’s support lies.

A Turkish delegation led by another deputy foreign minister, Sedat Onal, was poised to hold a second day of meetings with Russian counterparts in Moscow tomorrow to continue thorny talks on Idlib.

Erdogan has set an end-of-February deadline for regime forces to pull back from territory they captured in recent weeks, including around the strategic M4 and M5 highways connecting Damascus with the major cities in the country. Erdogan has hinted Turkey will attack should they fail to do so, placing Ankara directly at odds with Moscow.

Omer Celik, a spokesman for Erdogan’s ruling Justice and Development Party, renewed the threat today, suggesting that the talks in Moscow were not going as hoped. “Turkey has made the necessary preparations in northwestern Syria and told Russian counterparts it was determined to push the [Syrian President] Bashar al-Assad regime to previous boundaries,” Celik said.

Bahceli had earlier blamed Moscow for the deaths of 13 Turkish soldiers in two separate regime attacks in Idlib. Russia’s Foreign Ministry riposted that his remarks were incendiary.

Despite the chest thumping, it seems highly dubious that Turkey can translate its threats into action. Neither the United States nor the Europeans want to be dragged into a confrontation with Moscow over Idlib — as it sees things — over a crisis of Ankara’s own making. And Turkey cannot go it alone. Moreover, Erdogan can ill afford the likely economic fallout of another dust-up with Moscow of the kind Turkey suffered after shooting down a Russian plane in 2015. And it's entirely conceivable that Turkey is using Idlib to gain concessions from Russia for a freer hand against the Kurds.