Kavala is charged with espionage and "attempting to overthrow the constitutional order” in connection with the failed 2016 coup. 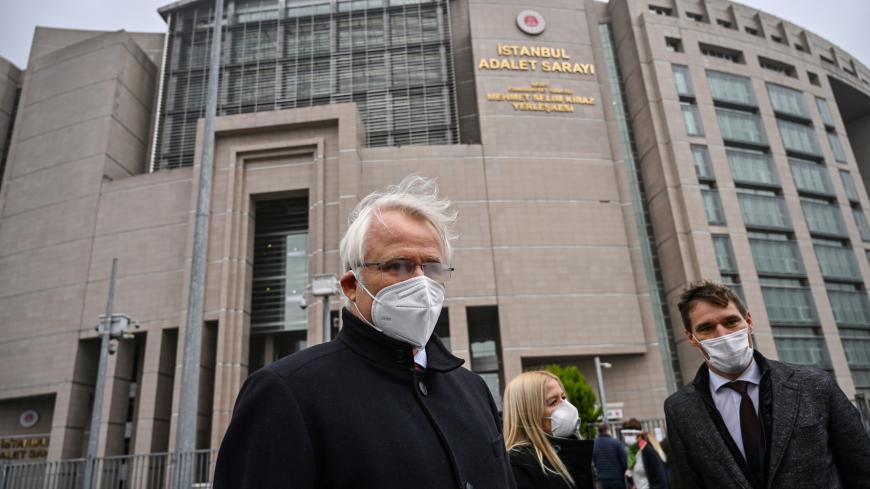 People, among them representatives of some of European countries' embassies, arrive at a court on Dec. 18, 2020, in Istanbul to attend a hearing in the trial of jailed Turkish businessman and philanthropist Osman Kavala, 63, on charges connected with a failed coup in 2016. A Turkish court ordered civil society leader Osman Kavala to remain in jail pending trial on charges that rights groups say are part of President Recep Tayyip Erdogan's bid to stifle dissent. - OZAN KOSE/AFP via Getty Images

Turkish philanthropist and businessman Osman Kavala appeared in an Istanbul courtroom Friday in a case rights organizations say is emblematic of Turkey’s crackdown on civil society.

Kavala was first arrested in November 2017, accused of organizing the nationwide Gezi Park protests that erupted in Istanbul in 2013. In February, the 63-year-old Kavala was acquitted of the protest-related charge, but rearrested hours later on charges of spying for the United States and aiding in the attempted 2016 coup that sought to topple Turkish President Recep Tayip Erdogan. Kavala denies all the allegations.

Kavala faces life in prison for “attempting to overthrow the constitutional order” and 20 years if found guilty of espionage. The Istanbul court Friday ordered Kavala’s continued detention until his next hearing scheduled for Feb. 5.

A prominent civil society leader, the Paris-born Kavala ran an organization that promotes cross-cultural collaboration in the arts and helped found US billionaire George Soros' Open Society Foundation in Turkey.

Human rights organizations and a number of foreign governments have called for the immediate and unconditional release of Kavala, who has remained in pretrial detention inside the maximum security Silivri prison for the past three years.

“Osman Kavala should not have spent a single minute behind bars, let alone more than three years in pretrial detention,” Amnesty International’s Europe Director, Nils Muizniek, said in a statement.

The European Court for Human Rights said last year that his lengthy detention was “intended to punish him as a critic of the government, to reduce him to silence as an NGO activist and human rights defender, to dissuade others from engaging in such activities and to paralyse civil society in the country.”

Turkey’s treatment of political prisoners has remained a source of tension between Ankara and Washington. The US State Department over the summer called for "a just, transparent and speedy resolution" to Kavala’s case. Turkish-American academic Henri Barkey is a codefendant in the case and is being tried in absentia.