Tunisia's president has taken a darker turn after unilaterally dissolving parliament and threatening to put elected deputies on trial. 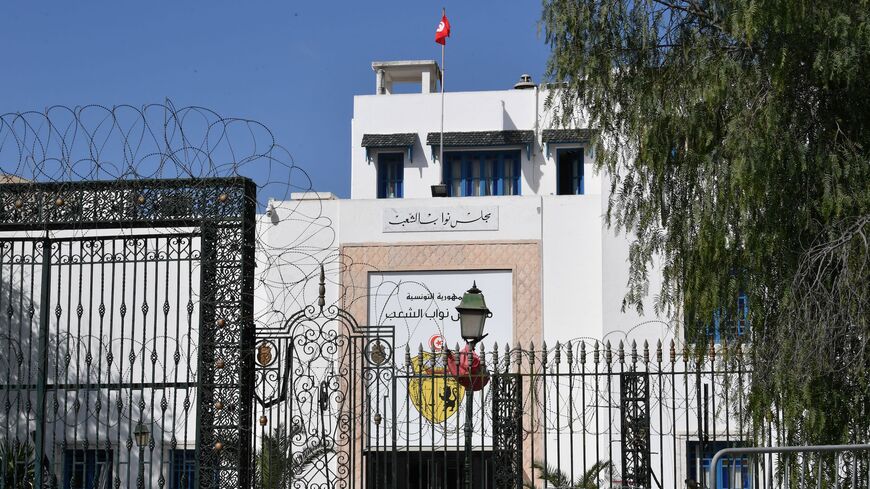 TUNIS, Tunisia — Tunisian President Kais Saied’s orders to dissolve parliament and investigate its members for “conspiracy” have pushed the country into deeper political turmoil and raised fears of a budding autocracy.

What lies ahead for the country’s political system — and whether it will restore its democratic institutions or continue on a path toward one-man rule — will likely hinge on the ability of civil society and other political players to mediate a resolution, as well as Saied’s ability to maintain public support amid a stumbling economy, analysts say.

The Tunisian president issued a decree to formally dissolve the legislative body, which has been suspended since July after its members voted to revoke “exceptional powers” the president gave himself eight months ago. Saied also threatened judicial action against the deputies, accusing them of “conspiracy against the state” by holding an “illegal” meeting.

The Tunisian Constitution gives Saied no mandate to issue such a decree and explicitly states that parliament cannot be dissolved if the president holds “exceptional powers.”

However, Saied justified the decision under a separate constitutional article, which says the president is responsible for guaranteeing the state’s “independence and continuity” and ensuring “respect for the constitution."

“We must protect the state from division. … We will not allow the abusers to continue their aggression against the state,” Saied said in an address to the Tunisian people.

More than 20 additional parliament members have received subpoenas, according to Ghannouchi, and the justice minister has called for even more to be investigated.

“If it was not clear already, Kais Saied’s moves to put half of the parliament on trial for treason and conspiracy should reveal to all his authoritarian ambitions,” Sharan Grewal, a professor at the College of William & Mary who focuses on the Middle East and North Africa politics, told Al-Monitor. “He has never been committed to the constitution.”

Tunisia analysts and watchdogs said the developments are putting the country’s young democracy in further peril, eight months after the president stunned the political class by ousting the government, suspending parliament and giving himself overarching powers.

Saied “has consistently exhibited a tendency toward executive aggrandizement, increasing his powers in violation of the constitution,” added Grewal.

Rights groups previously warned of a rise in repression of journalists and activists, a hallmark of the regime of longtime dictator Zine El Abidine Ben Ali.

"A police and security mentality is running the state. … Tunisia has become a country that suppresses freedoms,” Yassine Jelassi, head of the Tunisian National Journalists' Union, said at a press conference in January.

Saied, a political outsider who won in a landslide election victory in 2019 on promises of curbing corruption, has enjoyed strong public backing even while consolidating his power. In July, many Tunisians applauded his decision to freeze the widely unpopular parliament, which was often mired in embarrassing scandals and brawls and was too gridlocked to pass legislation. Since then, parliament has remained on the sidelines, while Saied has used his expansive powers to reshape the government and chart a new political vision by attempting to overhaul the 2014 Tunisian Constitution.

“We tried to find other ways to reach out to the president … but after his refusal to engage in dialogue with anyone, it was important for parliament to regain its role in helping to manage the crisis,” said Ounissi.

The chamber’s plenary session, held via video conference, had been planned behind the scenes for more than a month and drew deputies from across the political spectrum in a rare show of unity from the disparate forces. One-hundred and sixteen out of 120 participating parliament members voted to repeal Saied’s “exceptional measures” in a strong public rebuke of the president’s eight-month rule by fiat.

“We finally found enough common ground in our opposition to Saied to rally together. The success of the plenary is the result of Saied’s failure to be a leader of any sort,” said Ounissi.

There were signs that government forces were threatened by the vote and had mobilized to try to stop it, parliament members said.

Just before the session was due to begin Wednesday afternoon, online video platforms Microsoft Teams and Zoom went down in Tunisia, forcing deputies to delay the session and switch to another site. Parliament’s official webpage was also reportedly inaccessible during the afternoon, drawing the suspicion of government interference.

While parliament’s vote was largely symbolic, it shows that more political parties — including those that once supported Saied — are changing their tune and growing more confrontational.

Ghannouchi rejected the move and said the chamber should still be considered “operational” because Saied does not have the authority to dissolve it. Other parliament members and civil society groups said the president must hold snap parliamentary elections to replace the body within three months, as required by the constitution.

Saied has balked at both views, saying he will carry on with a plan to reform Tunisia’s Constitution and wait until December for a parliamentary poll.

So far, the president has kept details of his reform plan under wraps, but he previously advocated for changes that would strengthen the presidency. These include installing local councils to decentralize the power of parliament and clipping the wings of “corrupt” political parties. In the coming months, a committee of Saied’s favored experts will write the proposed reforms to be put to a national vote on July 25.

Grewal expects whatever new system the president creates to be “one in which the presidency wields significant power.”

“Regardless of what happens to the parliament and political parties in the new system, the most likely outcome is a shift to a presidential system — a worrying trend for all who opposed the strong presidentialism of Ben Ali,” he said.

While Saied remains popular, there appears to be little interest in his project. Less than 10% of eligible Tunisians participated in an online survey he initiated to gather public input in a blow to the process’s credibility. And with the economy sinking and prices on the rise, many are beginning to tire of his focus on rewriting the constitution.

“We are suffering more and more as prices grow higher and higher,” Alaa Kadri, a teacher in the central town of Sidi Bouzid, told Al-Monitor. "Many of us lack basic needs and food staples such as flour, sugar, grain and even oil to cook.”

Grewal said that “civil society organizations, despite their frustrations with Saied, are trying to set themselves up as the ‘neutral’ arbiters between the president and the opposition.”

Saied met with UGTT head Noureddine Tabboubi on April 1, and the two agreed on the need for a “partnership” to chart a way out of the crisis, Tabboubi said. But to what extent Saied is willing to make concessions — even amid mounting criticism at home and abroad — remains to be seen.

“Even if political parties, civil society and international donors all unify around a demand of restoring democratic institutions, and public opinion turns on Kais Saied (both of which are tall tasks), that still may not be enough,” said Grewal.

He added, “It ultimately depends on Kais Saied: Will he agree to negotiate, or will he escalate into even greater repression? We just don’t know. His personality and behavior will ultimately make or break Tunisian democracy.