Tunisia's president further cemented his hold on power this week as US lawmakers urged the Biden administration to scrutinize its security aid to the country. 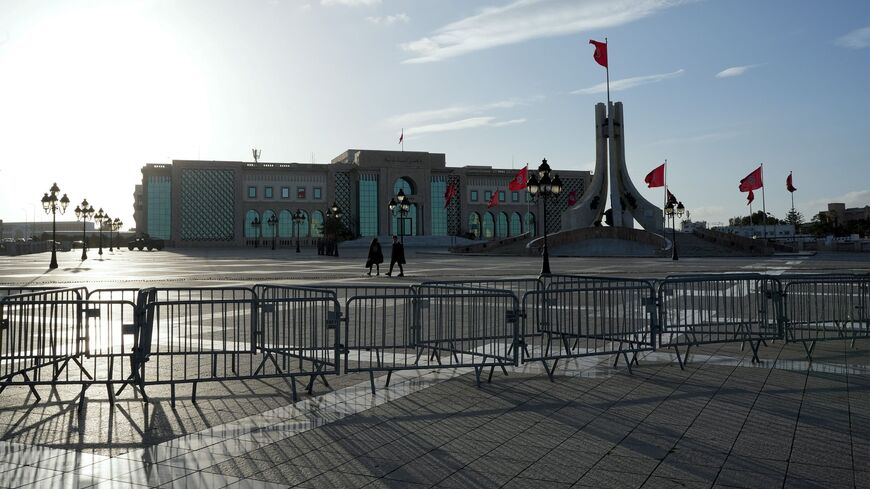 Kasbah Square, symbol of the 2011 revolutionary occupation, is shown on Feb. 20, 2022 in Tunis, Tunisia. Tunisians took to the streets in protest of a controversial new law extending power by President Kais Saied over the country's judiciary system. -

The Biden administration has proposed cutting US military aid to Tunisia by nearly half as the North African country’s leadership continues on the path toward authoritarianism.

Washington’s annual budget released earlier this week calls for $61 million in military and security aid to Tunisia next year, down from $112 million requested for this year.

The budget also calls for reducing State Department economic aid to Tunisia by $40 million, a nearly 50% reduction from this year's request. The proposed cuts come as the cash-strapped government in Tunis is exploring the possibility of a bailout with the IMF.

“The United States seeks to continue support to the Tunisian people and encourage the government’s return to constitutional governance,” a State Department spokesperson told Al-Monitor via email. “Reductions in US economic and security assistance, in comparison to prior year requests, reflect our significant concerns over continuing democratic backsliding.”

Why it Matters: The Biden administration is signaling that President Kais Saied and his allies are taking Tunisia’s democracy in the wrong direction.

Tunisia’s government had been hailed as the sole representative democracy to emerge from the 2011 Arab Spring uprisings.

But last July, Saied suspended parliament, dismissed the government and claimed executive powers amid widespread street protests over economic and healthcare crises related to COVID-19. The move was criticized by opponents as a political coup, but the president has so far retained moderate public support despite a number of moves by security forces to suppress dissent.

Saied, a former top constitutional law scholar, has insisted the measures are temporary and has vowed to hold a nationwide referendum on a new constitution this July, with parliamentary elections promised for December 17.

The Tunisian president’s actions are likely to further sour the mood among US lawmakers, who earlier this week urged the Biden administration to review its security aid to Tunisia based on democratic regression.

Washington has been one of Tunisia’s largest foreign backers since the 2011 revolution, signing a 10-year roadmap for defense cooperation in 2020 as strategic rival Russia made inroads with Wagner mercenaries in neighboring Libya.

What’s Next: US Secretary of State Antony Blinken is required to submit a report to Congress on the status of Tunisia’s democracy by mid-June.

Jalel Harchaoui, a researcher specializing in Libya and North Africa, said the proposed aid cuts amount to little more than a slap on the wrist.

“In terms of actual pain inflicted, it will barely be noticed by Saied,” Harchaoui told Al-Monitor.

The Tunisian president's behavior, Harchaoui said, "is unlikely to be altered by this news. Meanwhile, very valid efforts and projects will suffer regrettably."