Tunisians voted to drastically expand the president’s powers and critics warn the referendum could usher in a dictatorship. 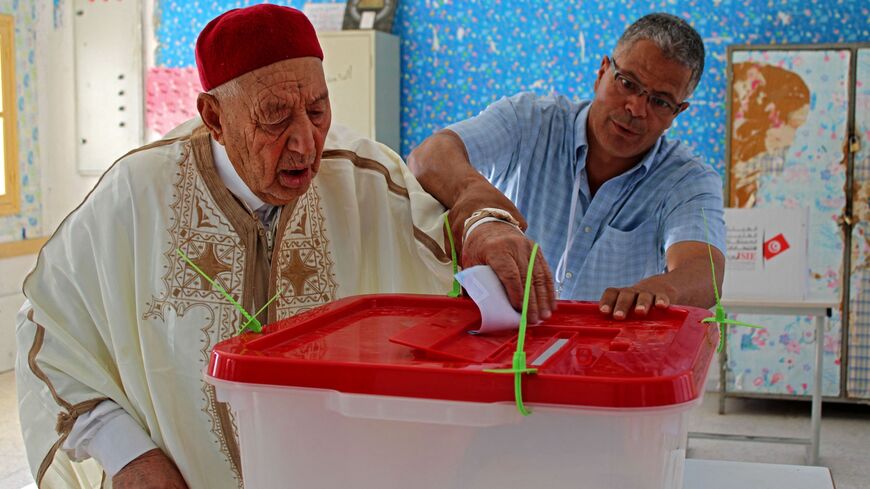 An elderly Tunisian man votes during a referendum on a draft constitution put forward by the country's president, at a polling station in Kasserine, on July 25, 2022. The vote is seen as a referendum on President Kais Saied, whose charter would give his office nearly unchecked powers in a break with the country's post-2011 democratic trend. - HATEM SALHI/AFP via Getty Images

TUNIS, Tunisia —A referendum on a new constitution that grants Tunisia’s president far-reaching powers passed overwhelmingly, according to results released by Tunisia’s election commission Tuesday night, delivering a stinging rebuke of the country’s post-revolutionary order and driving fears of a return to autocracy.

According to the Independent High Authority of Elections (ISIE), which President Kais Saied took control of in April, 94.6% of Tunisian voters on Monday endorsed the constitution put forward by the president. Turnout for the vote was low, however, with just over 30% of people participating compared to more than 55% in the last presidential election, signaling waning enthusiasm for the reforms at a time of growing economic distress, and dealing a blow to Saied’s efforts to secure legitimacy for the project.

The president’s supporters began claiming victory late Monday night and Saied joined the celebration, declaring the beginning of a “new phase” and vowing to hold accountable those who have “committed crimes against the country.”

The new constitution awards Tunisia’s head of state near-total control of the government and judiciary and eliminates most checks on his power, establishing a system critics say is tantamount to the dictatorship of longtime ruler Zine El Abidine Ben Ali.

Many voters told Al-Monitor that they favored the new constitution because 11 years after a revolution that heralded new freedoms and sparked the wider Arab Spring movement, they had lost faith in a system that seemed to reward corrupt politicians, cause chronic gridlock and bring economic ruin.

“Things have turned out for the worse since the revolution. There are no longer any jobs, studying is difficult and we need opportunities,” Chiraz Boudakim, a 34-year-old businesswoman, told Al-Monitor after casting her "yes" ballot in downtown Tunis. “We are voting this way to go back to how things were.”

Rachid, a 59-year-old retired man who gave only his first name, told Al-Monitor that people were putting their trust in Saied, a former constitutional law professor who shuns party politics because he has the people’s interest at heart, unlike other political figures.

“This country has had too many crooks who only look after themselves,” said Rachid. “Saied is willing to do what it takes to save Tunisia because he loves the people and loves the country.”

But not all Tunisians agreed that the country needs a new constitution, which was put to a vote exactly one year after Saied began a power grab by expelling the government, sidelining parliament and assuming “exceptional powers.”

Tunisia’s major political parties and civil society groups boycotted the vote, arguing it had no legitimacy because Saied had failed to consult key stakeholders, stifled criticism of the proposed reforms and turned the once independent election commission into his own “body par excellence.”

"We call on Tunisians to boycott this illegal, unconstitutional process that aims to legitimize a coup d'etat," opposition figure Ahmed Nejib Chebbi said at a press conference earlier this month. "For me, it's the quintessential bad constitution."

Even the man tasked with writing the constitution’s first draft, Sadeq Belaid, expressed alarm at the end result. He said Saied had single-handedly reauthored the text, transforming it into a document that sets the stage for a “disgraceful dictatorial regime.”

Marring the vote further, according to Saied’s opponents, was a crackdown on anti-Saied protesters and political figures the week before the referendum. On Friday, police reportedly arrested 10 protesters and assaulted others at the rally in the capital’s central boulevard. Earlier that week, the country’s anti-terror brigade questioned Rached Ghannouchi, the leader of the moderate Islamist Ennahda party and Saied’s principal political rival, for nine hours in a money-laundering probe before releasing him.

Saied’s critics also pointed to a shortage of independent election observers and the uncharacteristically low turnout as reasons to question the vote’s integrity.

“A constitution by the President, for the President,” said Said Benarbia, director of the International Commission of Jurists’ (ICJ’s) Middle East and North Africa division. “The process was illegal, the outcome is illegitimate.”

With no minimum voter threshold, Saied’s constitution easily passes, but building a political model that outlasts his time in office will be a much bigger challenge, analysts say.

“The constitution … will not grant his rule any legitimacy nor survive beyond his time as president,” Sharan Grewal, a professor at the College of William & Mary who focuses on Middle East and North Africa politics, told Al-Monitor. “To stand the test of time, a constitution needs to have been drafted inclusively and consensually, so that everyone feels that their voice has been heard.”

Tunisia’s next step will be to elect a new parliament in December, but the legislature will be significantly weakened under the new constitution with power split between two chambers and its authority eclipsed by a president who can dissolve it. Until that body is formed, Saied will continue to rule by decree, as stipulated in the new constitution, giving him nearly five months to continue building the “new republic” he seeks, undeterred.