Israeli premier scrambles to contain rebels in own party

The ouster of Yamina legislator Amichai Chikli will do little to calm the storm Prime Minister Naftali Bennett is facing. 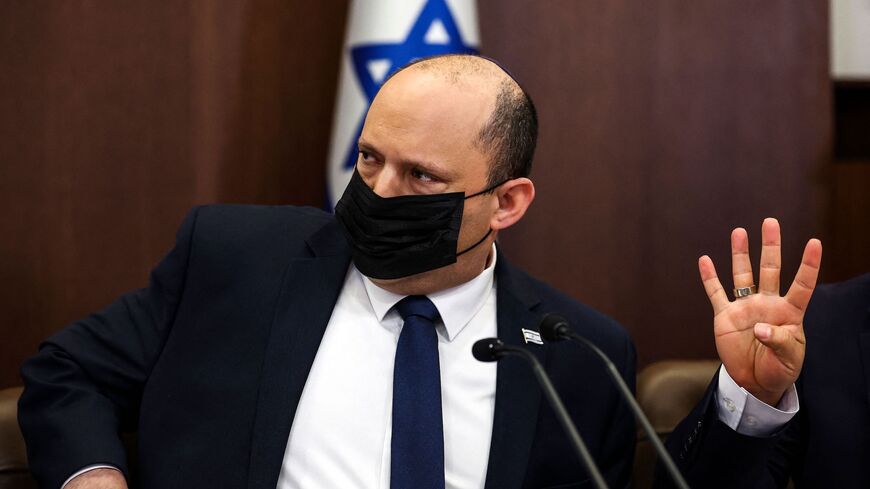 Israeli Prime Minister Naftali Bennett gestures as he attends a cabinet meeting at his office in Jerusalem, April 10, 2022. - RONEN ZVULUN/AFP via Getty Images

The Knesset House Committee declared April 25 that Knesset member Amichai Chikli of Prime Minister Naftali Bennett’s Yamina party would be considered a “retiree.” This form of sanctioning is reserved for extreme situations in which a Knesset member acts against the positions of his or her own party in order to receive benefits such as the promise of a senior position in a rival party. Knesset members declared “retirees” are banned from running in future elections as part of any existing party. In order to run, they must first form a new party.

Shortly before the last election, Chikli was given the number-five slot on Yamina’s party list. He is an educator and right-wing ideologue who served in the IDF. At the time, Bennett described him as an exemplary citizen. But then Bennett decided to join a coalition with leftist factions and even an Arab party, despite previous commitments to voters.

Chikli responded that given these circumstances, he would have to vote against the government. Last June he did so, explaining that he was remaining faithful to his promises to his voters while Bennett was violating his own. Since then, Chikli has voted against the coalition on numerous occasions while maintaining close ties with opposition leader Benjamin Netanyahu. Nevertheless, Bennett took no action against him, and the narrow coalition managed to survive.

Then in April, a new political bombshell landed. Knesset member and coalition whip Idit Silman announced that she “can no longer bear the damage to values ​​and flags that are our essence and right” and quit the coalition while remaining a member of Yamina. As a result of her decision, the coalition lost its 61-member majority. There were now fears that other members of her party will follow her lead and bring about the immediate collapse of the current government. After the last election, Bennett headed a party with seven seats. After these two defections, it has only five.

The Knesset also faces very serious problems with Ra’am, which suspended all of its parliamentary activity in response to the recent violence on the Temple Mount.

Sanctions against Chikli seem intended to signal to other Knesset members that if they vote against the coalition, they will be declared “retirees.”

Yamina’s remaining Knesset members must realize that their party has essentially ceased to exist. Many of its most active supporters have long abandoned it, leaving it with no electoral base on the right.

But Chikli does not meet the classic criteria of a “retiree.” He received no benefits for acting against the coalition, his motives apparently ideological. The committee deliberations were almost like a court hearing. Chikli arrived with a lawyer and argued that it was Bennett and his deputy, Interior Minister Ayelet Shaked, who really abandoned Yamina. In his defense statement, Chikli said, “Bennett, Shaked and their underlings dealt a fatal and shameful blow to democracy," adding, "It is necessary to oppose those who have turned their backs on those who voted for them because of lust for power, respect and authority."

Chikli may have become one of the most popular figures on the right and despite his loss, Bennett’s victory over him is entirely technical. He is in a dire situation without his base and with just five Knesset members. This is the first time Israel has been led by a prime minister who's showing no more than six seats in the polls.

Asher Cohen, a professor of political science at Bar Ilan University, was given the number-13 slot on the Yamina Knesset list. He now claims that the party essentially no longer exists. He and other senior members of Yamina are now claiming that it is Chikli who really represents the party’s values.

Chikli is expected to appeal the decision in district court over the next few days. He will argue that the law is irrelevant to his case. As he fights, the Chikli affair will remain on the public agenda and Bennett will continue to lose support among the right.

The Chikli affair is a symptom of the huge rift in the right since the current coalition was formed. Most voters on the right currently support one of the opposition parties: the Likud, the Religious Zionist party, or the ultra-Orthodox.

The right is in an uproar. Yamina’s members are under enormous pressure to quit the coalition. One prime target is Nir Orbach, who, like Silman is religious. Protesters are set up outside his house and he is subjected to insults and threats on social media. Bennett claims it's all an organized campaign of incitement put into play by Netanyahu.

Yesterday, letter threatening Bennett's family and a live bullet was sent to his wife Gilat at work. The coalition responded by accusing the right of engaging in the kind of incitement that could lead to the assassination of a prime minister.

Bennett turned to social media to call for calm, saying, “Political conflicts, no matter how deep rooted, should not descend into violence, bullying and death threats," and "As leaders and as citizens whose future and whose children’s future are in this country must do what it takes” to stop it.

The incident gave Bennett a chance to divert attention from recent attacks on his personal life, such as the 20,000 shekels ($6,000) in food purchases and restaurant deliveries to his home, paid for by the public. Bennett is also being attacked for continuing to reside in his home in Ra’anana, which was renovated at a cost of millions of shekels to be used as his official residence. It later came out that the work was done without any official approval process. In response, Bennett announced that he will fund the cost of food for his family out of his own pocket.

While the change is likely to allay some public criticism of Bennett, it's unlikely to have have any impact on the right’s political situation. The Knesset will be back in session in early May after a long spring recess. Bennett will return to the Knesset weakened. His own party will be smaller and his coalition will have lost its majority.

How long can Bennett last under these circumstances? Most experts agree that it won't be long. It's impossible to run the government for long with a paralyzed Knesset, and much of its energy will be spent simply on survival.