An Islamic State cell operating in Iraq’s largely desert province of Anbar killed two Iraqi soldiers the day after an armed drone allegedly from Iran-linked armed groups was shot down at a major base hosting coalition forces in the same area. 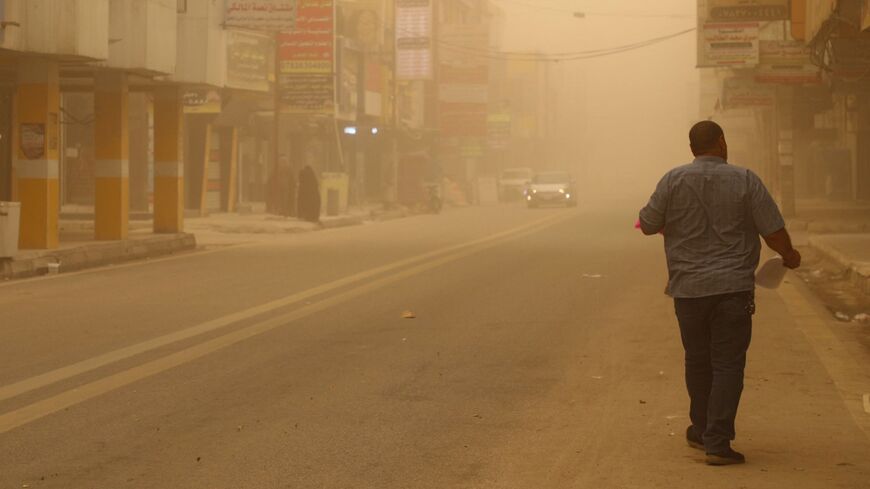 A man walks in a street during a dust storm in Iraq's city of Nasiriyah in the southern Dhi Qar province, on April 9, 2022. - ASAAD NIAZI/AFP via Getty Images

BAGHDAD – Islamic State (IS) fighters took advantage of reduced visibility resulting from a massive dust storm blanketing large parts of Iraq in recent days to carry out an attack on Iraqi Army soldiers in the country’s westernmost province.

IS later claimed responsibility for the April 9 attack, which occurred on a road near the town of Hit, about 50 kilometers northwest of the regional capital Ramadi. The attack killed two soldiers who were part of the Jazeera and Badia Operations Command.

IS reportedly claimed 120 attacks in Iraq in the first quarter of 2022, and another 77 were claimed by the group across the border in Syria.

The Anbar province is divided into two military operations areas, with the eastern part covering the regional capital of Ramadi and Fallujah and the western part stretching to the Syrian border.

The western part is mostly uninhabited except for the fertile Euphrates River Valley and cities flanking it and is known as the Jazeera and Badia. Hit is the first major urban center on the main highway after entering the western part of the large province.

The Ain al-Asad Air Base (AAAB) lies in a strategic area sometimes called the Hit-Haditha Corridor, just off the road between the two cities.

US air defense systems at AAAB shot down at least one armed drone early on April 8. Iraqis present on the base that day claimed two had targeted the base but only one had arrived inside the perimeter. Iran-linked factions are thought to have been behind the attack.

The base is used by Iraqi forces but also hosts trainers from the US-led international coalition against IS and others.

A coalition official contacted by Al-Monitor denied reports of rockets shot at the base as part of the attack and said that around 1,500 coalition personnel were currently at AAAB.

Though Anbar has long been as a key area for IS and other insurgent groups to hide in, fewer attacks have occurred there in recent years than in regions disputed between the Iraqi central government and the Kurdistan Region of Iraq, often attributed to a lack of proper coordination between the various forces operating on the ground and gaps in security.

Local security sources say that a network within the local Sunni Arab community in the Anbar region, including shepherds in the desert, enables many attacks to be prevented.

A Twitter account close to the Shiite-dominated Popular Mobilisation Forces (PMU) reported on April 9, the same day as the attack that killed the two Iraqi soldiers in the same province, that,“The Hashd al-Shaabi mourns the martyrdom of the heroic Ali al-Jassani of the 13th Brigade, who was martyred this evening performing his sacred jihad in Anbar, as a result of an explosive device left behind by ISIS terrorists, which also led to the injury of 2 other fighters.”

Unexploded ordnance from the years of the war against IS remains an issue across much of Iraq and has killed other soldiers in Anbar in recent months.

Hashd al-Shaabi is the Arabic name for the PMU. Many of the factions within the PMU started out as Iran-trained and backed militias and see their fight as being a sacred jihad.

The loyalty of some these factions to the Iraqi government is often questioned.

The 13th Brigade of the PMU is part of what is also known as Liwa al-Tufuf, the name normally used for the brigade by Anbar residents. The commander of Liwa al-Tufuf was arrested in May 2021 but released almost two weeks later.

The US-led coalition contributed significant support to the war against IS in Iraq, which started in 2014, but officially transitioned to a non-combat mission in late 2021. Though officially declared defeated in Iraq in December 2017, IS continues to operate clandestinely in the country.

Some see tensions between the local community in Anbar and some of the non-local PMU forces deployed to the area as aggravating risks already posed by IS.

IS cells now generally target Iraqi security forces and those seen as collaborating with them in relatively small incidents, with mass attacks in urban areas rare.

On April 12, the Anbar regional police said that they had arrested “a terrorist group that was planning to carry out assassinations using toxic substances” against community leaders and commanders of security forces.

The photo accompanying the news showed four handcuffed men with their backs to the camera.