Despite the ongoing war between Russia and Ukraine and sanctions imposed on Moscow, a Russian delegation visited Egypt to inspect the construction work at the Dabaa nuclear plant. 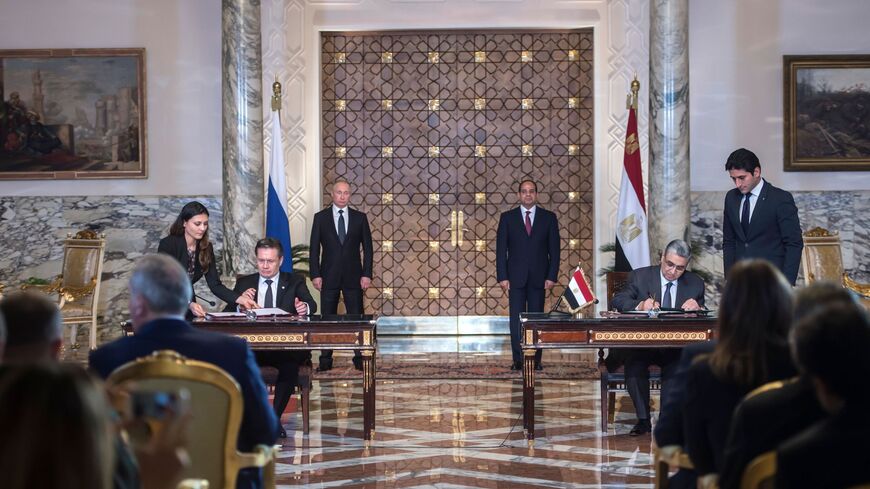 CAIRO — In spite of the ongoing war in Ukraine and US and Western sanctions on Moscow, Russia sent a delegation to visit the Dabaa nuclear power plant in Egypt April 17.

The Russian delegation along with Egyptian officials visited the construction site of the Dabaa power plant project to inspect the bases of the pits of power generation units 1 and 2, the facilities of the construction base and the concrete-mix unit.

In 2015, Egypt and Russia signed a contract to build Egypt’s first nuclear power plant in the city of Dabaa in the Marsa Matrouh governorate in the west of the country, with a capacity of 4,800 megawatts through four reactors.

Amjad al-Wakeel, head of Egypt’s Nuclear Power Plants Authority (NPPA), accompanied the Russian delegation to the plant’s construction site. He said in a statement on April 17 that the implementation of the Dabaa plant project is evolving in coordination with Russian officials to establish the first nuclear power plant for peaceful uses in Egypt.

He explained that “the work is underway in accordance with the schedule agreed upon with Rosatom,” adding that “the Egyptian and Russian work teams are able to deliver all specified tasks, maintaining the highest standards of quality and safety.”

Lokshin said in a statement, “We have set the clock with our Egyptian partners and identified the next steps required to accomplish the set tasks. We are working … in harmony and dynamism in all of the project implementation parts, and work is progressing at a good pace.”

Lokshin expects the nuclear power plant to obtain a construction permit for the first reactor this coming summer after the approval of the Egyptian State Nuclear and Radiological Regulatory Authority.

These statements come after media reports suggested a delay in the implementation of the Dabaa nuclear power plant in light of the Russian war on Ukraine and ensuing Western sanctions against the Russian government, which is the main financier of the project. The sanctions include disconnecting Russian banks from the international SWIFT network.

Russia’s TASS news agency had said in January of the power plant project, “The total cost of construction is $30 billion. The parties also signed an agreement to provide Egypt with a state export loan of $25 billion for the construction of the nuclear power plant, which will cover 85% of the work. Under the agreement, Egypt is to start payments on the loan, which was provided at 3% per annum, in October 2029.”

On April 18, officials from the Egyptian Atomic Energy Authority discussed with the visiting Russian delegation the contracts related to the purchase of nuclear fuel and some products made of aluminum alloys and aluminum powder, necessary for the operation of the second Egyptian research reactor in 2030.

Former NPPA deputy head Ali Abdel Nabi told Al-Monitor, “The recent Russian delegation’s visit underscores the implementation of the Dabaa project, especially in light of the ongoing war in Ukraine, which some expected to cast a shadow on the project’s implementation schedule. It has become certain now that the Russians and the Egyptians are working together to speed up its implementation regardless of current political circumstances.”

"The project cannot be delayed because every day of delay will cost us $2 million, which is the value we obtain when the implementation is completed and the generated power is exported abroad,” Abdel Nabi added.

He explained that “the containment bases that would enclose the first and second reactors’ units at the plant were dug. The next phase includes pouring concrete into those units after obtaining the permit, which is expected to be issued in mid-2022 after completing the review of the initial safety report, which includes the designs of the plant and reconciliation studies between the Dabaa site and what is commensurate with the Russian nuclear plants.”

Abdel Nabi said, “Moving forward with the construction and the Russian delegation’s visit indicates that the work on the project is in progress according to the set timetable without delay. This visit indicates that the project is as important for Moscow as it is for Cairo, which was confirmed in the last call between President Abdel Fattah al-Sisi and his Russian counterpart, Vladimir Putin. Hence, things are going as planned.”

On March 9, Sisi and Putin discussed in a phone call the “latest developments related to the strategic partnership between Cairo and Moscow, including the implementation of major nuclear energy joint projects,” the Russian Foreign Ministry said in a tweet.

During a March 23 meeting with a delegation from the Egyptian Association of Graduates of Russian and Soviet Universities, Russian Ambassador to Cairo Georgy Borisenko reassured his listeners that cooperation continues between Cairo and Moscow, stressing Russia's commitment to implementing all the agreements Russia has signed with Egypt.

Ramadan Abul Ela, a petroleum engineering professor and vice president of Alexandria's Pharos University, told Al-Monitor by phone, “The Russian delegation’s visit is a political visit par excellence, because Russia is trying to improve its relationship with the world countries, especially in light of the suffocating European and American blockade. The Russian regime seeks to maintain good economic relations with countries that have not severed relations with Moscow.”

He explained that “Egypt could benefit now from any additional advantages from Russia in implementing the Dabaa project, especially in light of international pressure on Moscow and the economic blockade.”

Abdel Nabi added, “The sanctions on Moscow will not affect the course of the project because months ago [the Russian side] began manufacturing equipment for the nuclear plant, such as the reactor core catcher for nuclear units. This was announced during the recent visit of the [Egyptian] minister of electricity to Moscow [in July 2021].”

Bloomberg reported March 9, that the US administration is considering imposing sanctions on Russia’s state-owned atomic energy company, Rosatom Corp, a major supplier of fuel and technology to power plants around the world. No final decision has been made until now.

Tarek Fahmy, a professor of political science at Cairo University, told Al-Monitor, “The visit confirms the direct Russian presence in the project continuation, which reflects the Russian endeavor to coordinate with Egypt politically and strategically and to expand economic coordination in the next period.”

He added, “The Russians are practically saying that they support Egypt in its major project (the Dabaa plant), thus discrediting reports on the delay or disruption of the project due to the war in Ukraine.”

Commenting on the impact of the visit, he said, “The Russian delegation’s visit in Cairo confirms the peer-to-peer Egyptian foreign relations and that Egypt is not biased to one party at the expense of another at this time. It is also a Russian message to the world that its economic cooperation with friendly countries is ongoing. It is also a message to the United States that affirms the Egyptian-Russian partnership.”