The Egyptian Ministry of Tourism and Antiquities announced the restoration of a historic warehouse of weapons dating back to the era of Muhammad Ali Pasha in Old Cairo, as part of a wider project to develop the historic area to promote tourism. 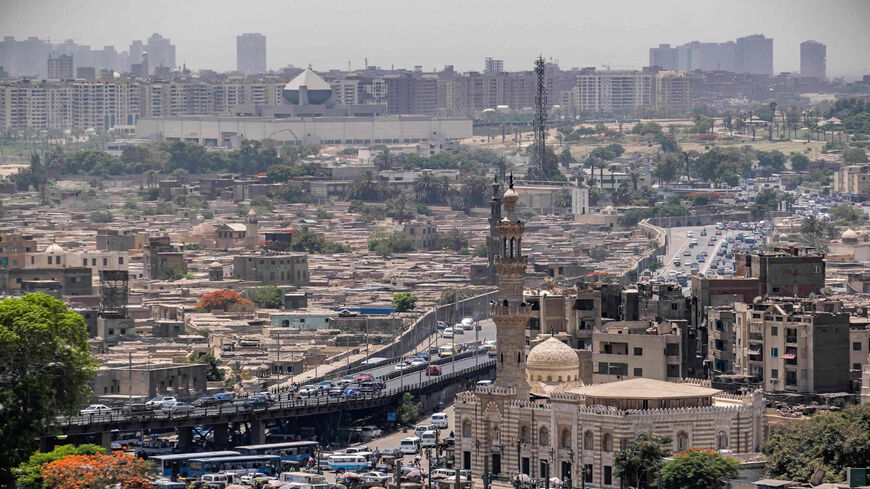 The Cairo Citadel is seen with in the foreground the 14th-century Sayyida Aisha Mosque and shrine and in the background the new National Museum of Egyptian Civilization, Cairo, Egypt, May 26, 2021. - Amir Makar/AFP via Getty Images

CAIRO — The Egyptian Ministry of Tourism and Antiquities announced April 24 the start of the restoration of the Gunpowder Factory, known as the Gabkhana, which consists of a warehouse and factory of weapons and ammunition dating back to the era of Muhammad Ali Pasha, in the Istabl Antar area in the capital Cairo.

The restoration project of the Gabkhana comes after years of neglect of the site, which saw the proliferation of garbage and stray dogs, while random buildings have been constructed around the historical site.

The project comes as part of a wider plan by the Egyptian government to develop the old historical districts of Cairo. According to a Cabinet statement in October 2021, the plan consists of revitalizing Old Cairo by removing randomly built buildings and replacing them with housing units. The plan also includes the building of several commercial and cultural centers in the area.

Mustafa Waziri, secretary-general of the state-owned Supreme Council of Antiquities, inspected April 24 several Islamic antiquities in Cairo, including the Gabkhana, to follow up on the restoration works in the area.

The restoration project of the Gabkhana includes removing the accumulated dirt as a result of erosion and weather factors, restoring stones to their original condition, as well as waste removal works, architectural and meticulous restoration, and completion of the cornice and wooden doors, according to a statement by the Ministry of Tourism and Antiquities.

According to a report published by the Egyptian Shorouk newspaper in 2018, the Gunpowder Factory is considered one of the few antiquities in the world of this kind. It was the second to be built by Muhammad Ali Pasha, who ruled Egypt from 1805 to 1848, after the first weapons warehouse located in the Citadel of Saladin — also know as the Citadel of Cairo and which served as the seat of Muhammad Ali Pasha’s rule — caught fire twice in the past.

This prompted Muhammad Ali Pasha to establish another weapons warehouse in the desert of Egypt in Cairo, away from the Citadel, to prevent the occurrence of a third accident. He protected the warehouse with four high walls.

The newspaper reported, “Muhammad Ali Pasha worked hard to establish it [the warehouse] away from the population centers at that time, and he did not imagine that the place he chose as a storehouse for his soldiers’ weapons would turn centuries later into a garbage dump.”

Abdel Rahim Rihan, archaeological expert and director general of archaeological research and studies at the Ministry of Tourism and Antiquities in south Sinai, told Al-Monitor, “The restoration of the Gabkhana serves several purposes: first to protect and preserve it from deterioration as a result of the weather conditions, and second to integrate it on the tourism map as a landmark monument.”

He said, “The third purpose of the restoration is to shed scientific and media attention on the landmark’s significance, allowing researchers and specialists to study it historically, archaeologically, architecturally and artistically.”

Rihan explained, “The restoration of Islamic antiquities, including the Gabkhana, paves the way for investments [in those archaeological areas], which brings great benefit to antiquities and contributes to their development, in addition to revitalizing and developing historical tourism in the diverse Islamic monuments.”

He pointed out that the weapons warehouse “was established in 1829 as a storehouse for sulfur and gunpowder ammunition, following repeated fires in the original storehouse in the Citadel of Cairo in 1819 and then in 1823. At that time [1829], the site was a desert area far from urbanization.”

Rihan noted that the warehouse is surrounded by an external wall, with some rooms outside of the structure, connected to each other by an underground corridor.

“The wall is 180 meters [590 feet] high and 115 meters [377 feet] surrounding a wide courtyard with cooling water wells to reduce the temperature of the place,” he said.

He added, “The windows and rooms were also designed to prevent the sun’s heat from passing through with sufficient light to avoid igniting the stored gunpowder.”

Muhammad Abdel Latif, former assistant minister of tourism and antiquities, who previously headed the ministry's Islamic Antiquities Department, stressed "the importance of the gunpowder cache, which was a factory and storehouse for ammunition during the era of Muhammad Ali Pasha, who wanted to build a powerful Egyptian army. He also established Egypt’s first military school, which is today the Egyptian Military Academy.”

He said, “The ammunition and weapons warehouse was built away from the Citadel of Cairo, which was the seat of the government during the era of Muhammad Ali Pasha, because of the repeated fires that broke out in the original storehouse, which could have killed major figures at the time and could give the idea to the citizens that governance was not in order inside the Citadel.”

Commenting on whether restoring the warehouse would contribute to attracting more tourists, Abdul Latif said, “It is very important to restore and develop religious antiquities areas, whether Islamic, Coptic or Jewish. But restoring the building alone is not enough, as the entire area surrounding it should be given a facelift. It is a working-class area, with some slums here and there that need to be redeveloped.”

Abdel Aal said during the meeting, “The Cairo governorate seeks to develop the area surrounding the Gabkhana area, in cooperation with civil society institutions in order to implement the political leadership’s directives to restore cultural and historical monuments in the capital as part of a wider project to develop the area of ancient Egypt and Fustat and eliminating slums.”

“Developing the areas surrounding archaeological sites is one of the most important factors for tourist attractions, in addition to the need for good marketing and promotion of archaeological sites, because we lack this. Therefore, we do not take full advantage of Egypt's cultural heritage,” Abdel Latif concluded.