Ukraine war pits Netanyahu fans, foes against each other

Opponents of former Prime Minister Benjamin Netanyahu blame him for allying himself for years with Russian President Vladimir Putin. 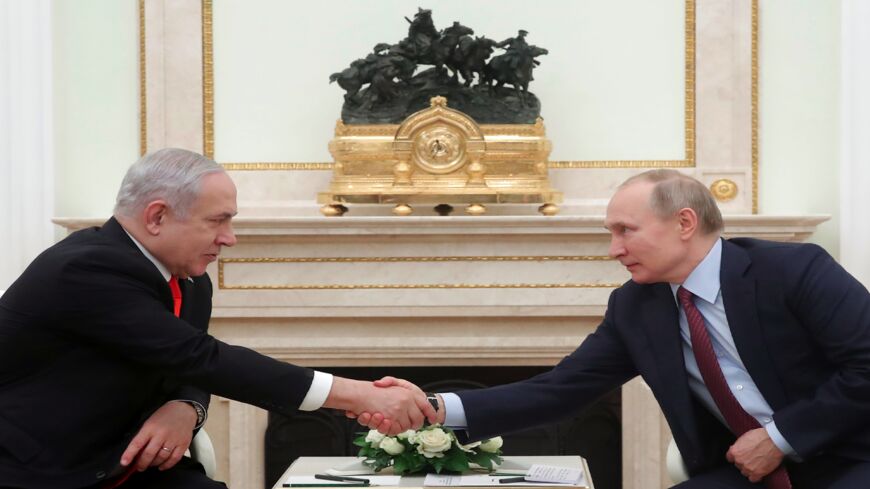 The Russia-Ukraine war has been pitting supporters of former Prime Minister Benjamin Netanyahu against his opponents from the day it began thousands of kilometers away.

The “Bibists,” as fans of Netanyahu are known, have in recent years highlighted the alliance Netanyahu forged with Russian President Vladimir Putin as proof of the former prime minister’s diplomatic and strategic skills, an alliance that has enabled Israel to continue targeting Iranian targets in Syria despite the Russian military deployment there. Netanyahu’s successor, Naftali Bennett, has adopted the same policy and also boasted of his good ties with the Kremlin — until the Ukraine war came along and disrupted the world order, sending the flames of Israel’s domestic political skirmishes sky high.

On Feb. 26, thousands attended demonstrations in Tel Aviv and Jerusalem for and against Russia. One of the protesters used a megaphone to shout “Putin murders people; he is violent and dangerous.” Others spray-painted “Stop Russian fascism” on the external wall of the Russian Embassy in Tel Aviv. Against this tense backdrop, Israel’s “government of change,” as it dubs itself, is under pressure to take a more proactive and unambiguous stand on Russia’s invasion.

Bennett and Foreign Minister Yair Lapid adopted a low profile in the initial days of the war, trying to avoid taking sides and angering Moscow or Kyiv. But as the days wore on, they — and especially Lapid — began expressing increasing pro-Western and Ukrainian stands and distancing themselves from Russia.

Israel had little choice but to join the sweeping UN condemnation of Russia this week, and it has also dispatched cargo planes loaded with medical equipment and food to Ukraine. Under public pressure, it is even preparing to take in a limited number of Ukrainian refugees. Bennett has spoken in recent days with both Ukraine President Volodymyr Zelenskyy and Putin to offer his mediation services, a move that failed to yield results other than derision on the part of Netanyahu supporters who portrayed Bennett as a publicity hound harming Israeli interests.

Lapid, as mentioned, is the face of Putin’s critics in the multifaction government. In one of his many statements in recent days, Lapid pledged, “Israel has been and will be on the right side of history. Those are our values," adding that the United States was and remains Israel’s main ally but that the Americans understand the “points that the country needs to be mindful of and require [it] to be careful.”

The comments by the centrist politician prompted mockery from the right. He was accused of “perpetrating stupidity,” with media personalities associated with the political right and Netanyahu leading the venomous charge. “The cruel Russian invasion of Ukraine highlights that the right side of history is to prevent a nuclear agreement with Iran expected to bolster it toward a bomb,” tweeted veteran Middle Eastern affairs journalist Yoni Ben-Menachem, who was obviously referring to the negotiations in Vienna, an arena where Israel appears to be losing against Iran and world powers.

Netanyahu himself has been largely silent, but on March 2, the former prime minister called on the government to take a more guarded approach to the war in Ukraine and instead focus on the Iran nuclear deal. “The nuclear deal with Iran threatens our existence,” Netanyahu said. “And on this very issue, Bennett and Lapid aren’t saying anything and aren’t doing anything.”

This argument, which stems from the dilemma of balancing competing Israeli interests vis-a-vis the two warring sides, has an additional dimension, evident on social media and in media outlets associated with the political right.

Such claims come up repeatedly in these circles, prompting the left to accuse the Bibists of having lost all moral judgment, tweeted media businessman Ilan Shiloah, a supporter of the current government. Shiloah described the situation thus: “Anyone who favors Ukraine favors democracy, freedom and human rights. It’s amazing to see the Bibists supporting Putin and to see who beside Iran and Syria is taking Putin’s side.”

Journalist and left-wing activist Meron Rappaport devoted an article to the question of why Netanyahu fans favor the Russian side. “This support comes first from a political position. This war is supposed to prove the American "weakness" under Democratic President Joe Biden, whose unpardonable sin was defeating the darling of the Israeli right, Donald Trump, and to remind us how important it is for someone the whole world respects, i.e., Benjamin Netanyahu, to lead our government rather than a conman with six Knesset seats.” He was referring to the six seats (out of 120) held by Bennett’s Yamina party in the legislature, which opponents argue makes his premiership illegitimate.

Haaretz pundit Uri Misgav accused Netanyahu of an ethical flaw that is now forcing the “government of change” to preserve ties with Putin rather than side clearly with Ukraine. In a widely shared article, including by former Prime Minister Ehud Barak, Misgav wrote: “That’s not how a proud, sovereign country acts, one that is confident in its path and its scale of values. … Of course, the root of the evil … is the long-standing subservience that Prime Minister Benjamin Netanyahu had to Putin and to Donald Trump. It’s no wonder that among supporters of Trump and Netanyahu, there’s considerable backing for the invasion and its instigator.”

Another expression of the impact the war in Europe is having on the discourse in Israel is the question of whether Israel should open its gates to non-Jewish Ukrainian refugees. Here, too, the dividing line is clearly partisan.

This issue has raised tensions between the right-wing and center-left factions of the coalition government. For example, Communications Minister Yoaz Hendel of the right-wing New Hope party suggested in an interview that Israel “could absorb a few dozen or hundred as a symbolic gesture, and even then, only on a temporary basis.” Israel, he added, must not grant citizenship to those among the refugees who are not Jewish. Similar voices on the right have warned against a flood of non-Jewish refugees undermining Israel’s Jewish identity.

The Russia-Ukraine war is being waged far from Israel, but the tense local climate offers fertile ground for further clashes between the pro- and anti-Netanyahu camps and could potentially have political repercussions if the war drags on. In that case, too, the argument will focus on the question of whether Netanyahu was right.