Israeli leadership caught between US, Russia over Ukraine 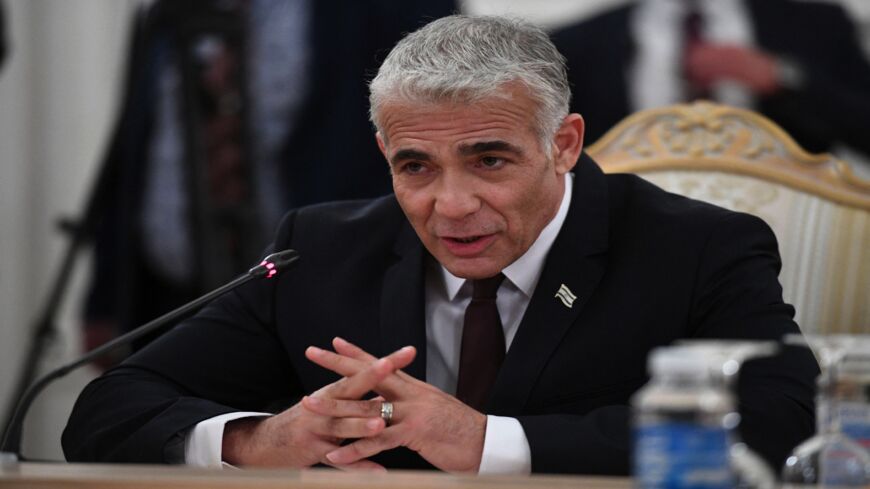 Foreign Minister Yair Lapid’s briefing to reporters Feb. 13 about escalating tensions between Russia and Ukraine can best be described as circumspect. It focused on the urgent need to evacuate Israelis still in the volatile region. The reason for this is that official Israel is doing everything it can to avoid taking a stance in the conflict. It is caught between Ukraine and the West on one hand and the Russians on the other hand. It maintains friendly relations with all the parties involved in the conflict and shares mutual security, diplomatic and cultural interests with them.

Nevertheless, beyond his carefully chosen words, the Israeli foreign minister seemed to be implying that Israel tended to favor Ukraine. Lapid also stressed that Israel is the only country that has not removed its diplomats from the beleaguered nation. On the contrary, it actually increased staffing at its embassy there during the crisis. He also discussed his meeting earlier that day with Ukraine’s deputy Foreign Minister Emine Dzheppar and how they reached an understanding that the embassy would open a second office in Lviv should this be deemed necessary.

As expected, Lapid also expressed his hope that the crisis would be resolved diplomatically. When asked point-blank why Israel has maintained its neutrality, he responded, “Israel’s response is no different from the responses of countries like Germany, the Netherlands or Korea. We are one step below the American response. The Ukrainians have a clear interest to ensure that nothing happens, but we will only know in the next few days whether something does happen.” He continued, “Our position is that every step must be taken to avoid a clash between Russia and Ukraine. … It is quite possible that I am showing more caution than other foreign ministers. That is because both countries, Russia and Ukraine, have sizable Jewish communities, which we must protect. But the Israeli position is in complete accord with all the other West nations that everything must be done to avoid armed conflict.”

When asked whether Israel might mediate the dispute, he answered, “Israel is not involved in the conflict, so it is proceeding with caution.”

What makes these comments interesting is that they seem to include a course adjustment to compensate upward for any diplomatic errors that he and Prime Minister Naftali Bennett might have made over the last few weeks due to caution or lack of experience. They realized the hard way that this is their first major baptism by fire on the diplomatic front. Never before in their current capacities have they been forced to maneuver in such a tangled web of competing interests.

The first error was Bennett’s response two weeks ago to growing tension along the Russia-Ukraine border. The Walla news site reported that during his meeting with Russian President Vladimir Putin in Sochi on Oct. 22, Bennett relayed to him a proposal made by Kyiv to host a summit in Jerusalem between Ukraine and Russia as part of an effort to lower tensions and prevent the situation from escalating. The reasoning behind this was good. He wanted to take advantage of Israel’s unique position, i.e., its good relations with both countries, in an effort to reduce tensions. On the other hand, it is clear that Bennett’s entourage should not have released this information at this time.

Putin politely turned down the offer. As expected, experts in diplomatic affairs could not help but wonder why Israel would want to get involved, given how problematic the situation is. From a diplomatic perspective, the right thing to do would be to stay as far away as possible from it. It looks like Bennett and his team eventually reached the same conclusion. The issue seems to have been dropped almost as soon as it was made public.

Last week, it was Foreign Minister Lapid’s turn to get into trouble. In an interview with Walla, Lapid offered his assessment that there would be no war between Russia and Ukraine. This resulted in an angry response, unusual in its intensity, from Ukraine’s Ambassador to Israel Yevgen Korniychuk: “I am deeply appalled by the recent remarks of Mr. Lapid regarding his vision of the ‘Russia-Ukraine conflict. … It is not a conflict; it is a war that Russia aggressively and cynically conducts against Ukraine.”

Korniychuk continued by referring to the fighting that has been taking place in eastern Ukraine since 2014: “It is a shame that Mr. Lapid has not noticed the war in the center of Europe, which [has lasted] for eight years already. … Unfortunately, Mr. Minister reiterates the rhetoric of Russian propaganda and ignores the disturbing messages from his own strongest allies — the USA, Britain and the EU — regarding the high possibility of a full-scale Russian military invasion into Ukraine in the coming weeks.” As a result, the Ukrainian ambassador was called to the Foreign Ministry in Jerusalem in order to “clarify” his remarks. It appears as if the differences were resolved.

Late last week, as tensions escalated, the Prime Minister’s Office instructed ministers not to comment on the issue beyond calls to Israelis to return home at once. This seems to be in response to how sensitive the issue had become.

As a result of this incident with the Ukrainians, Lapid concluded that these days, anything he says about the issue could drag Israel into an unnecessary conflict. During his press briefing, it was obvious that he was trying to allay the fears of the Ukrainians by hinting that Israel sides with them as the aggrieved party. He was effectively telegraphing that Israel stands with the United States and the West.

Behind the scenes, however, Israel has multiple conflicting interests. Perhaps the best known of these is Israel’s dependence on the Russians for freedom of activity when attacking Iranian targets in Syria. This is a dramatic advantage that former Prime Minister Benjamin Netanyahu fostered over time, with the government following in his footsteps. Apparently, this is also the reason why, according to a report in Yedioth Ahronoth this morning, Israel torpedoed US efforts to equip Ukraine with the Iron Dome missile defense system. (The Iron Dome was developed by Israel with the support of the Pentagon. According to an agreement between the two countries, the system cannot be sold to a third-party state unless both Israel and the United States agree.) According to the report, equipping Ukraine with the missile defense system moments before a Russian invasion would have led to a serious crisis in the relationship between Israel and Moscow. It was also reported that the Ukrainians appealed directly to the Bennett-Lapid government, only to be turned down. Perhaps this is why the Ukrainian ambassador was so angry with Lapid.

As of now, Israel has managed to remove the issue from the agenda. Nevertheless, sources in Ukraine have expressed disappointment over the Israeli position. Based on all of the above, it can be concluded that the conflict between Russia and Ukraine is a major diplomatic headache for the Bennett-Lapid government. They are the responsible adults in the room now. They can no longer blame the “Netanyahu legacy,” as they so often do. It is now their turn to prove that they can maneuver through a tangled and complex diplomatic situation, both overtly and covertly.