As tensions between Russia and Ukraine intensify, Israeli high-tech companies are worried over the safety of thousands of Ukrainian programmers. 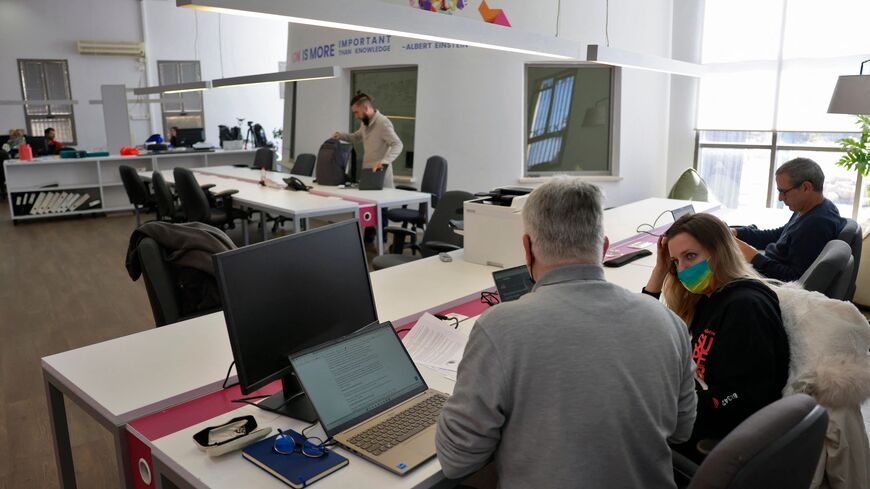 People work at a high-tech cannabis products start-up at a technological incubator center in the Israeli town of Yeruham in the southern Negev desert on Feb. 1, 2022. - MENAHEM KAHANA/AFP via Getty Images

The conflict between Russia and Ukraine is causing problems all around the world— including the risk to Israeli high-tech firms, who rely on close to 20,000 Ukrainian employees.

The last few years have set new records for the Israeli high-tech industry.  According to Israel’s Ministry of Economics, high-tech exports of programming, cyber security, and OCCs (offensive cyber capabilities) soared in 2021. The greatest growth has been in the sale of Israeli start-ups, which grew by 257 percent from 2020. Programming services grew by 25 percent and R&D services by 15 percent.

Thus, the Israeli high-tech industry needs more workers, but the Israeli labor market alone cannot meet the demand. According to a survey conducted by the human resources company Ethosia in December 2021, there were 21,000 job openings in an industry that employs some 350,000 people.

One solution is hiring programmers from other countries, through local companies that provide the necessary technological infrastructure and contacts with Israeli firms. In the past, India was the main provider. Today, Eastern Europe — and especially Ukraine — has filled that gap. The current estimate is that over 15,000 Ukrainian programmers work directly with Israeli high-tech companies, along with several thousand more freelancers and people providing support services to the high-tech centers, where these workers are located.

There are several reasons why the relationship has been so successful. Many native speakers of Russian and/or Ukrainian already work in high-tech in Israel. The countries are in the same time zone, and they even seem to share a similar mindset. Ukrainian programmers have risen through the ranks of Israeli companies, and many are now team leaders or even head entire departments and divisions

Ukrainian workers are skilled and highly educated, and work for as little as half the salary of their counterparts in Israel or the US. When working from home began to flourish during the coronavirus pandemic, it became even easier for Israeli firms to hire workers overseas. Several Israeli companies opened branch offices and programming centers in Ukrainian cities such as Kharkiv, Donetsk, and Kyiv, so that now Hebrew is frequently heard in local bars.

But this boom seems to be in imminent danger as the Russian military buildup  gains momentum, and the fear of an invasion is real.

The city of Kharkiv, which is close to the Russian border, is home to several branches of Israeli companies, as well as to freelance programmers who work for Israeli companies. These companies are already planning for contingencies in the event of an invasion.

Peter Kolomeitz, who manages projects in Ukraine for Aman, has already prepared a plan to evacuate employees and their families to Kyiv, fund hotel stays for them, and provide them with food. Further, he is preparing to evacuate his staff to Poland if necessary and is acquiring satellite communications technologies for them. “We have already seen that pulling the plug on the internet is a tactic used repeatedly by the Russians,” he said, referring to a series of cyberattacks on Ukrainian infrastructures attributed to Russia.

Other companies have approached airlines about chartering flights to evacuate programmers and their families to Western Europe or Israel. These companies are also preparing for potential cyberattacks or the denial of electricity and internet connections.

Ukraine’s foreign minister, Dmytro Kuleba, told a press conference that ties between Kyiv and Jerusalem are tight, and that cooperation has only gotten tighter recently. He added that Ukraine hopes to receive technology from Israel, especially defense technologies. A newspaper report in Israel claims that the Ukrainians are particularly interested in Israel’s air defense capabilities, including the Iron Dome anti-missile system.

However, Jerusalem really doesn’t want to get involved in a dispute with Russia. Israel has offered to mediate between the two countries, with whom it maintains friendly relations. On the other hand, Foreign Minister Yair Lapid infuriated the Ukrainians when he said that Israel does not believe that there will be a war between Russia and Ukraine.

The Ukrainian ambassador to Israel, Yevgen Korniychuk, responded with an angry post on social media, saying to Lapid, “It is not a conflict - it is a WAR, that Russia aggressively and cynically conducts against Ukraine… Sharing Israel's concerns about Iran's nuclear program, I dare to suggest that if a full-scale war breaks out in Europe, Israel will be left face-to-face with the Iranian threat.”

The incident is evidence of Israel’s unwillingness to confront Russia, despite the firm position of the US and the West about Putin’s policies. For now, at least, Israel is caught sitting on the fence.