Israel’s trade with Ukraine, Russia to be affected by conflict

Israel fears that the ongoing conflict could negatively affect trade with both Russia and Ukraine, in high tech, but perhaps also on wheat, coal and diamonds. 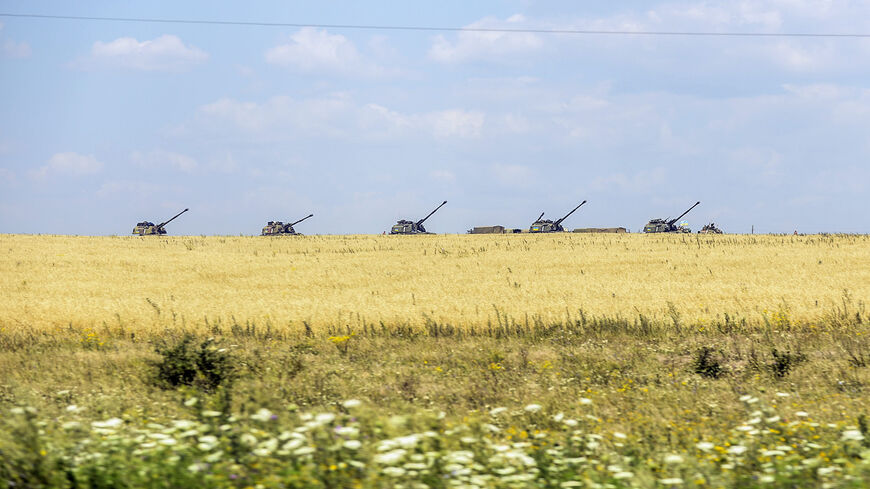 Ukrainian tanks stand guard near a field in the village of Debaltseve, in the Donetsk region, eastern Ukraine, July 31, 2014. - Bulent Kilic/AFP via Getty Images

Russia’s invasion of Ukraine placed Israel in a very problematic situation. Its cautious reaction to recent events has earned Israel scathing criticism in the West, and particularly in the United States. But the impact all this has on Israel extends far beyond diplomacy. The country is deeply concerned about the economic damage it could face as a result of the war between two important trading partners, Russia and Ukraine.

Based on annual trade figures by the Ministry of Economy and Industry, Israeli exports of goods and services to Russia amount to $1 billion per year, while imports from Russia come to $2.5 billion. Most of the Russian imports consist of fuel, minerals and gemstones, particularly diamonds. Israel’s major exports to Russia consist of agricultural products (26%), machinery and medical and optical equipment (41%), and chemicals. Half of Israel’s wheat imports originate in Russia, while another 30% come from Ukraine. Russia also provides Israel with a significant part of the coal used to power the country’s electrical stations. Israel gets the coal for a relatively low price, too.

Israeli trade with Ukraine is significantly less than that with Russia, amounting to under $800 million per year (the 2021 figures are still incomplete). Some 80% of that is imports, especially wheat and other agricultural products.

At the Cabinet meeting Feb. 27, Prime Minister Naftali Bennett said that Israel is prepared to deal with the direct economic implications of the conflict, adding that these implications are being tracked by a team of senior officials representing several ministries set up for this purpose specifically. One of the team’s main tasks is assessing Israel’s current stockpiles of wheat, coal, oil, etc. That is being done to ensure that the crisis does not result in any real shortages.

Ron Malka, director general of the Ministry of Economy and Industry, told Al-Monitor that Israel has adequate supplies of all these products, include grain and fodder, for which Russia and Ukraine are Israel’s main suppliers. Regardless, the country is also establishing alternative supply chains, should they be needed. He said that if there is an escalation of violence and the supply chain from either or both of those countries experiences delays or even gets cut altogether, there will be alternative sources.

The problem, he explained, is that these other sources will be considerably more expensive. Furthermore, prices will be affected globally, because of anticipated rises in fuel prices and a potential shortage of goods, as evidence by the cost indices on the various commodities exchanges. When asked about the effect of sanctions, Malka noted that the Israeli political leadership is responsible for deciding how Israel will react. He recognizes that the impact on Israeli companies operating in Russia could be severe, however, because business ties with Russia are extensive and encompass many different fields. In addition, numerous Israeli companies have branch offices in Russia.

This could be especially true of Israeli high-tech companies, which have received inordinate Russian attention over the past few years. This has been expressed both in terms of direct investments and the creation of subsidiaries in Moscow and other cities.

Work at Ukrainian branches of Israeli companies has also come to a complete stop, directly impacting some 20,000 employees on the ground, mostly programmers. Most of their work has been put on hold because of Russian attacks on Ukrainian cities, though the companies make every effort to assist their staff. In some cases, they have even paid the staff in advance, to help them through this difficult period. Nevertheless, it is obvious to everyone that productivity in Ukraine has suffered a devastating blow.

The city of Kharkov, near the Russian border, is home to several branch offices of Israeli companies, as well as freelance programmers who work for Israeli companies through service centers. These companies had already started planning for a complete cessation of activity by their employees in the event of an invasion. Among these is the Israeli gaming company Plarium, many of whose 800 developers live in Kharkov. Similarly, outsourcing companies like Aman and Cellcom also have development centers in eastern Ukraine.

One area where Israel is somewhat less concerned is the energy market. Israel is already supplied with gas from its Mediterranean gas fields, which offer cheap prices subject to long-term contracts. However, a global rise in the cost of petrol is expected to impact prices in all other energy areas, too. And as mentioned, Russia is also Israel’s main supplier of coal. An interruption to this supply, whether because of sanctions or some other reason, will result in the need to import coal from other, far more expensive sources.

Another branch of Israeli trade that is nervously watching the latest developments in Ukraine is the diamond industry. Yoram Dvash, president of the World Federation of Diamond Bourses, told Al-Monitor that there is no doubt that sanctions imposed on Russia will have serious implications for the diamond industry. Russia is the leading producer of raw diamonds, controlling about one-third of the world market. They are a major player, he explained, so that sanctions interrupting trade with them will result in a steep rise in prices. While Dvash believes that current sanctions on Russian banks will have a minor impact only, he hopes that the crisis ends quickly, so as to avoid a need for even harsher sanctions.

Israel is already deliberating seriously about how far it is willing to condemn Russia’s actions. If more sanctions are imposed, Israel will have a lot more to think about. After all, sanctions have real, practical consequences. During a press conference, Foreign Minister Yair Lapid said that Israel is looking carefully at the significance of sanctions on Russia. “We created an inter-ministerial team to examine the impact and implications of sanctions on the Israeli economy and our policies,” he noted.

Sources in Jerusalem say that the Americans have already asked Israel not to allow Russian banks and individuals subject to sanctions to get around them through Israeli banks and the local financial system.

Lapid cautioned ministers to act with extra prudence if they receive requests for help from Russian citizens, especially Jewish citizens. Over the last few days, there have been reports that Israeli organizations have asked the United States to make exceptions for individuals who have contributed to Israel, including billionaire Roman Abramovich. So far, it seems, Abramovich has been trying to maintain a low profile. He even gave up his direct control of England’s Chelsea football team, which he owns, by handing it over to its trustees.