The Israeli high-tech sector has thrived through the end of 2021, with Israeli unicorns making more money than ever before and entering the US stock exchanges. 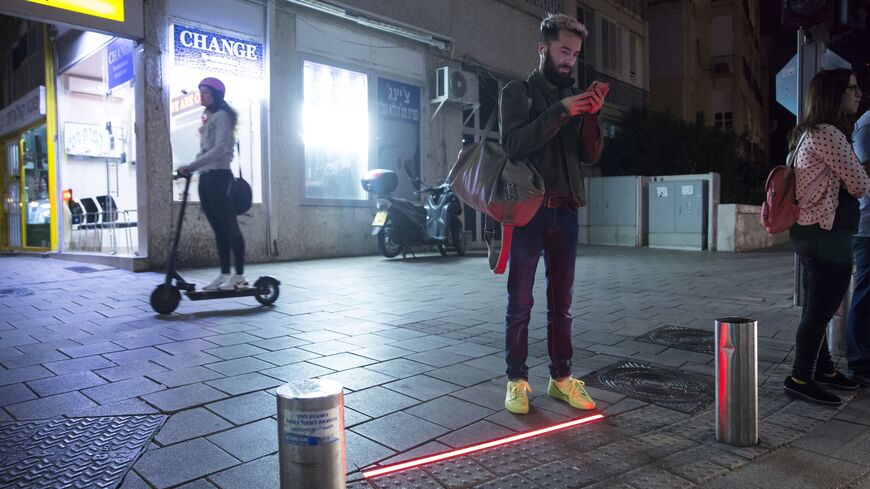 A pedestrian looks at his mobile phone as he stands by an LED light installed at a pedestrian crossing on April 11, 2019 in Tel Aviv, Israel. - Amir Levy/Getty Images

With 2021 coming to a close, Israel’s Ministry of Economic Affairs released new data for the year. One figure that stood out was an impressive increase of almost 20 percent in exports, valued at close to $140 billion. The data also showed the strength and importance of the high-tech sector in the Israeli economy.

The Ministry’s Foreign Trade Administration noted this was the first time that the export of services exceeded the export of goods, with an anticipated 51 percent of all exports. Service exports are, for the most part, high-tech products such as programs, cybersecurity both offensive and defensive, and more. The greatest export growth was sales of start-up companies, which grew by no less than 257 percent. Exports involving programming grew by 25 percent, while the export of research and development services grew by 15 percent.

Director of the Foreign Trade Administration Ohad Cohen tells Al-Monitor that the growth in exports is especially impressive in the cyber and cyber-adjacent realms, in programming, and in programming services, which make up one of the main sources of growth in the Israeli economy. He points out that in 2015, cyber exports made up 12 percent of all exports, whereas today, they account for 24 percent, or $35 billion.

Cohen also notes that the coronavirus pandemic was actually a boon to the cyber sector, since it allowed people to work remotely, avoiding the need for large factories or the transportation of goods. This coincided with an overall global increase in cyber services. Israel is recognized for the quality of its innovative solutions in the field, exporting them and related research and development products globally.

In the last two years alone, there have been almost 50 Israeli  “unicorns,” or high-tech companies valued at $1 billion or more. In 2021, they raised almost $15 billion in investments. Though most of the money came from the United States and Europe, the United Arab Emirates and India are also becoming key players. Of these companies, 17 began trading on Wall Street in the last year, each of them preserving or increasing their value.

The most important explanation for Israel's tech prominence is cybersecurity, which is the focus of 10 the 50 high-tech unicorns. However, some companies, particularly NSO, may be too successful. After NSO was caught selling cell phone tracking software to authoritarian regimes, the US Commerce Department announced that it, and other similar companies, have been added to its blacklist.

While there is considerable fear of short-term damage to the Israeli economy, the US response also has its benefits. It bolstered the companies' reputations, creating more interest in and demand for their products.

Another reason for Israel's success is that capital markets around the world have more ready money for investment. Israel has proved to be a trustworthy incubator, in which advanced companies and innovative ideas and breakthroughs emerge steadily.

Also, the desperate rush for digital products when the pandemic began immediately increased the demand for servers and cloud services, and for inexpensive, simple programs for working from home and storing data. Cyber technology filled this need yet again.

But the transition to telecommuting and the cloud intensified attempts to hack these servers, often with ransomware programs. The demand for programs to protect companies from these attacks increased accordingly. One of the main reasons that cybersecurity in Israel is such a strong branch is because the field is staffed by IDF alumni from units that dealt specifically with these problems, including the famous Unit 8200.

Another plus for Israeli startups is their their small size. Faced with  small domestic market, they must think globally and build themselves up accordingly. High-risk investors overseas point to the Israeli firms’ global orientation, even when small.

Furthermore, it is apparently easier for smaller young companies to adapt to new market demands. If clients want products which can be installed without support teams, or products which can be supplied instantly, Israeli high-tech firms know how to find rapid solutions. In other words, they were born for this. It is an inherent advantage, which distinguishes them from larger American companies.

On the other hand, a closer look shows problems relating to this success. The industry employs just 10 percent of the Israeli workforce, and the current government's goal is to increase the number of employees in high-tech to 15 percent of the total workforce by 2026. Also, the high average wage has lured top workers away from other sectors, many of which suffer from a severe shortage of staffing in certain fields.

Then there is the problem of geography. Most people employed in high-tech live in the center of the country, i.e., Tel Aviv and its environs. Far fewer live in the periphery, exacerbating already troubling economic gaps between different regions of the country.

The bottom line, however, is that the high-tech sector has become a major engine of the Israeli economy.

Economy and trade
Start-ups and entrepreneurship