Big investments announced in recent weeks in Israeli start-up companies might indicate that the slowdown, the layoffs and other difficulties facing the global high-tech industry might be temporary. 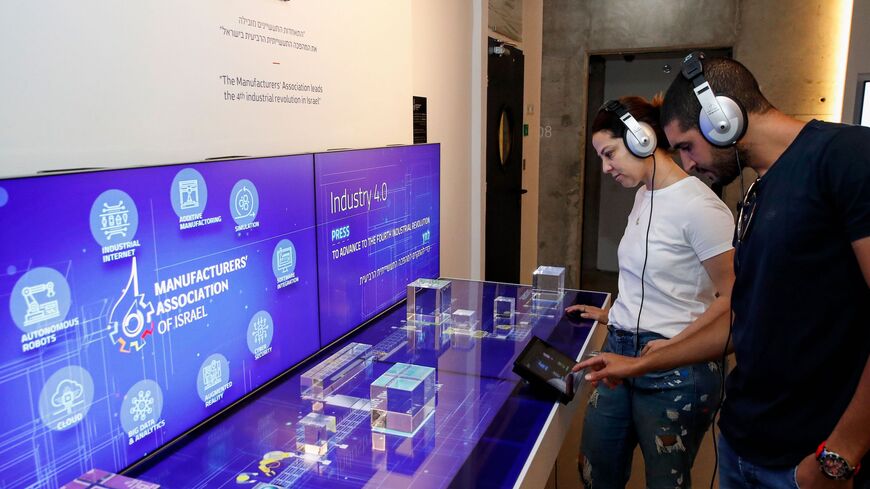 Visitors interact with a display by the Manufacturer's Association of Israel, at the "Israeli Expo" technology exhibit at the Peres Center for Peace and Innovation in the Israeli coastal city of Tel Aviv on Sept. 3, 2019. - JACK GUEZ/AFP via Getty Images

Like so many other places in the world, Israel’s high-tech industry has started to slow down somewhat, especially when compared to the rapid growth of the last few years. This is evident from the decline in new hires, layoffs and even the closure of some smaller firms.

For example, Reali, a company founded by Israelis, which developed a platform for the acquisition of real estate, announced last August that it would cease operation. The company laid off its eight employees in Israel, as well as another 130 employees in the United States. This came after the company raised $100 million last year, including a significant investment from football legend Joe Montana. According to Reali CEO Tyler Baldwin, the company is closing due to a slowdown in the overall real estate market caused by the international economic situation and the resulting difficulty in raising funding.

And yet, despite this downward trend, investments in Israeli high-tech companies haven’t stopped. A few Israeli unicorns and startups have managed to raise hundreds of millions of dollars in the last few weeks, as if to prove that the worldwide slowdown is only temporary and that the future still lies in high-tech, in different domains.

For instance, the Israeli company DriveNets, which builds communications networks on the cloud, raised $262 million in late August. This brings the total amount raised by the company to $587 million dollars, with the company’s valuation now exceeding $2 billion.

DriveNets was founded in 2015 by two high-tech entrepreneurs, Ido Susan and Hillel Kobrinsky. Susan had previously founded Intucell, a company that enables mobile operators to optimize their use of radio access networks independently. The company was acquired by Cisco in 2013 for $475 million. Kobrinsky founded Interwise, a specialist in online conference calls. It was sold to AT&T for $121 million.

The current round of funding was completed after a very significant year in which the company continued to grow, expand into new markets and increase its workforce by 50% to about 450 employees in Israel and around the world. The company also signed important contracts with some of the largest communication companies in the world. It is currently in various stages of having those companies incorporate the solutions that it offers.

Another company that recently received considerable capital is HiBob. It raised in August $150 million in a new round of funding, so its estimated valuation is now $2.45 billion. This came just 10 months after it raised a similar amount in a prior round. The company developed “Bob,” an innovative platform to manage human resources, now used by over 2,500 companies with hundreds of thousands of employees.

HiBob has doubled its size since 2021, with 370 new hires. The company also expanded operations in the United States, Canada, Australia, the United Kingdom, Germany, Sweden, Denmark, Netherlands, Spain and Eastern Europe. It also continues to expand its activities in Israel and is hiring engineers, support staff and digital marketers, as well as people in finance and information management.

Founder and CEO Ronni Zehavi offered a much more optimistic picture of the employment market in high-tech in Israel and around the world. “Based on the activities of the company’s clients on the ‘Bob’ platform, it appears that recruitment and hiring still exceeds layoffs. They (our clients) are hiring more staff than they are cutting. While these are not the same growth rates that we saw in 2021, there is no doubt that we are seeing a positive balance favoring new hires and growth. We expect most of the companies to hire more in the next few quarters since it is impossible to grow now without the right people,” Zehavi told the Israeli press.

This wave of investments that came in August also included the cyber fund Cyberstarts. It was able to raise $60 million for a new seed fund. This is the third fund created by the company’s founder Gili Raanan, and it raised the money soon after his "New Opportunities" fund raised $200 million. This brings the total assets managed by Cyberstarts to some $374 million. According to the fund’s management, the companies in its portfolio raised $2 billion in 2021 for a total worth of $20 billion.

AccessiBe is not that far away. It recently raised $30 billion. Founded in 2018, AccessiBe develops diverse technologies to make websites accessible to people with disabilities. After last year’s rapid growth, it now employs a staff of 140 in its offices in Tel Aviv and New York.

Another Israeli unicorn that keeps expanding is BigPanda. Recently, it raised $15 million, in addition to the funding it raised in January from UBS and Wells Fargo. The company assists large organizations to reduce interruptions to their IT services through a problem management system. So far, it has raised $310 million, after raising $190 million last January, for an evaluation of $1.2 billion. The additional funding was raised at the same value. BigPanda is based in Tel Aviv and has offices in the United States and London. It employs a staff of 350 people, including 115 in Israel.

On the startup side, Rookout announced Aug. 23 that it had managed to raise $16 million. The company developed a platform to resolve one of the most troublesome problems faced daily by developers: the ability to understand the behavior of the code they are working on when it goes live in distant environments. Dozens of Fortune 500 companies have adopted the platform, including Amdocs, Yelp, Autodesk, Santander Bank, Dynatrace and Cisco.

The company grew from 40 employees at the beginning of the year to 60 today — 52 of whom are employed in Israel and the remainder in the United States. More so, it announced that the new funding will be used to hire more staff, increase marketing and expedite the development of new products to help developers.

The long, abovementioned list is partial and doesn't include all the recent investments in Israeli startups and high-tech funds. Thus, it offers hope to the whole Israeli high-tech industry. These big investments might indicate that the global slowdown might affect Israeli high-tech only temporarily or be "less exaggerated," as Daniel Frankenstein, co-founder and partner at Joule Ventures LLC, put it in his last PRO Memo for Al-Monitor. "Israel’s tech ecosystem will generally track the global trends, seeing a drop-off in the number of deals, investment dollars, M&A transactions and IPOs." However, he adds, "These downward trends are likely to be less exaggerated in places like Israel that didn’t see as much valuation and deal velocity."